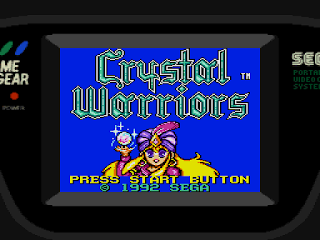 
Finding an accurate release date for this title was difficult when I planned out the year. Most had the it as late 1991, and others as late as Dec. 1992. I didn't notice until too late that the title screen listed 1992 or I would have moved it on to the following year. In any case, it's a short, easy, and simple enough game to tackle now. Once again my only option was use emulation in order to get screen shots, but this game is available on the 3DS Virtual Console if you're interested in checking it out or playing on the go without using 6-AA batteries. This time I used the emulator's built-in overlay to obscure the screen to the correct display resolution.
Centuries of peace were disrupted when the Jyn empire attacked the kingdom of Ariel in order to capture the four elemental crystals. At the end of the invasion though, they noted only three, and a missing princess Iris. Emperor Grym's plan to dominate Tyramus with the crystals was thwarted. He sent his men in search of the princess, and gain the last crystal.
The princess Iris was joined by three fighters, a healer, and a mage. Each stage has static monsters as well as enemy forces that encroach on the party's starting location. Every unit has an elemental affinity, and the game uses a rock-paper-scissors mechanic for enhanced damage and defense. Fire > Wind > Water > Fire, and Earth sits as a neutral element. The princess, healer, and mage are earth while the fighters are one of each type. Paying attention to the weaknesses of the enemy was key to overcoming them easily. The mages are the most dangerous since they don't have an inherent weakness, and can potentially cast spells matching the weakness of any character. However, not every enemy mage had every elemental spell. To offset this, each fighter can capture monsters they defeat, and summon them to battle in the fighter's place.
Each map had the enemies starting at one castle, and Iris at another. If the castle became occupied by opposing forces, then the opposing forces won. Most of the time, it was better to wipe out the enemies to gain more experience. Control alternates between player and enemy, and all units can either move plus take an action, attack, or cast a spell. Terrain didn't seem to contribute to combat. There was plenty of healing and MP to go around; however, it's not a complete a cake-walk. Any unit lost during battle were permanently removed from the army. Between each map the party rested at a town where hints, equipment, spells, and units were bought.
There's also a fortune teller that reveals the composition of the enemy army (if they favor one element over another). Deciding which enemies to deploy didn't come into play until the army had more than nine units. Most of the free hints from NPCs were for flavor. The game became even easier once I raised my healer to max level. It caused her stats to become completely overpowered compared to other units. This took some effort to accomplish as experience is only gained when a unit delivers the killing blow.
At certain points in the game, Iris gained additional crystals, but they were merely set pieces with no added benefit to battle. The towns cycled through various equipment with little rhyme or reason as to what was available. Spells were the same way. Although the later stages tended to have better spells and equipment, I often received offers late in the game for starting spells and equipment. The available recruits shuffled each town as well.
Eventually we came to a point where Iris took out Grym, and then a final map where we took on a great evil (a jinn I think) and triumphed. I'm sure you can tell how vested I was in the story. There were a couple of named generals, but overall every mapped blended into each other, every town looked the same, and I felt like I was taking on the same 5 enemies with little change to my tactics. The only strategic part of this game was juggling around my units to ensure everyone was at an equal level. After 16 stages, the game ended.
My experience with this game was just bland. If I didn't end up leveling my healer, then it could have taken longer, but I don't believe it would have been any more difficult. Often she was eating up experience that could have been useful for other units. It's easy enough that I don't think anyone would have trouble with it, but there's no intrigue to grab a player's attention.

Elapsed Time: 6h44m (Final Time: 6h44m)
Combatant - Combat is simple, and easy. The AI rarely makes an effort to avoid obvious traps, and will walk right down choke points. Mages offer easy ways to reduce enemy units, but enemy mages can counter any attack. This won't be the last time we see rock-paper-scissor style combat. It seems to be something of a phenomenon in this genre. Stats make a huge difference, but it can be such a pain to get the right units leveled. Under-leveled units have little chance to make up the gap if they fall too far behind. Gold is gained from each defeated unit in addition to 4 experience points.
Rating: 5
Admirer - Spells are customized with four slots per character, and separated by healer and mage spells. Mages have scan, and elemental spells. Healers have healing, and status effects that only work when they're participating in combat. Iris has a few specifically for her, but there's always an obvious best choice when deciding how to equip a character. Appearance doesn't change, and there are no advancement options. Controls are decent enough, and I don't remember having any problems.
Rating: 4
Puzzler - I suppose as long as the game has a main quest this category will never be less than 1. Unfortunately, that's all this game gets. No side quests, no puzzles, and nothing else aside from combat and preparing for combat.
Rating: 1
Instigator - The story hardly pushes the game forward. I couldn't even tell if it was the same town I returned to, or 15 different towns. The helpful fortuneteller, mostly useless, is the only NPC worth any time. Everyone else drones on about how hard life is since Grym attacked, but there's really no evidence to support such claims. There aren't any decisions, and I can't say I was immersed in the game at any point.
Rating: 2
Collector - There's equipment, but only two levels for each type of unit. No other items exist in the game. Gold is in short supply, and with recruiting, buying random spells, and random equipment, it's hard to say when a good purchase will pay off. Spells and equipment are replaced with newer ones.
Rating: 1
Explorer - There's no world: it's set map, followed by town, followed by set map, followed by town, followed by (repeat until game ends). There's nothing hidden in the towns or maps, and no reason to explore. The graphics were well done, and while I don't recall the music, I don't think it annoyed me at all. Exploration is completely closed to either the current map or the current town.
Rating: 2
Final Rating: 15 [25%]

While not the best game, it's definitely not the worst. I can't say I enjoyed the experience though, and I'm unlikely to ever revisit the game. I wouldn't recommend it. The best thing I can say about it is that it wasn't terrible. It's probably the most basic strategy RPG we'll see, or at least I could hope so.
Moving on, we have the gaming year 1992 to cover before heading into our first game of that year: Ys III: Wanderers of Ys. I've owned the game on SNES since it was released, and that's the version I'll cover. It was released on Genesis and TG-CD at about the same time. While it might be interesting to look at the others, I'm going to stick to my one port policy. I might cover a few differences in the starting areas to give some comparison, but don't plan to play through each version.
Posted by Zenic Reverie at 6:40 PM