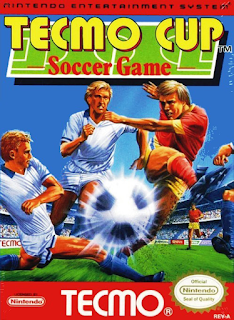 As far as I can tell, this is even less of an RPG than the RPG mode in Pinball Quest. Sports based role-playing games may have their day, but not today. Even considering the sport itself as combat, this game seems to have very little depth . Offensive options are to dribble, shoot, and pass, and defensive options are to tackle, cut, or wait. Every character has these, some at higher costs than others, but there's no indication that one character is better than another. Stats are invisible, and if they improve, I didn't see it happen.

It's nice to see a sports game with a story, but it's such a light touch that rarely goes beyond "good luck in the next match" or "watch out for Eric, he's a strong player." There's no exploration, quests, or equipment. The turn based shots, blocking, and random encounters on the field with invisible opponents blocking the ball felt like it lacked control over my player's actions, which hurts a sports game. There's a Genesis version that adds a few more details, but the game is basically the same.

For those looking forward to Cosmic Fantasy 2, the posts are delayed as my TurboDuo CD stopped playing music. While I can do without music, this is a sign of bad capacitors that could damage the whole system. I'm waiting on a capacitor kit that once replaced should fix the issue. If it doesn't, then I may move on to Final Fantasy: Mystic Quest until I can find another solution.
Posted by Zenic Reverie at 9:08 PM