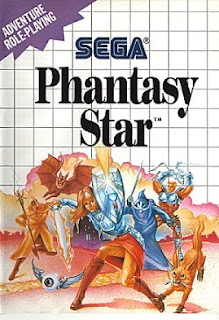 This is a game that needs no introduction, but I'll give one anyway. Possibly first console RPG released in the US (I can't find an accurate date for this or Miracle Warriors) and definitely the first to have a sci-fi theme, Phantasy Star kicks off an epic adventure that spans four games in the main series. With strong influences from Ultima (evident by the overhead view for towns and the world map, and first-person for dungeons), Phantasy Star sets itself apart by telling a story with characters that show personality and are deeply involved in the events. Alis watches as her brother is killed; swearing revenge, she sets out to vanquish the one responsible for his death. 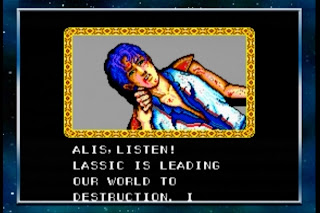 I had never heard of this game as a kid. Our family was a Nintendo home (at least until Nintendo 64, but that's another story). So I heard little of the Genesis, and much less of the Sega Master System. However, even if I had heard of this game, I probably couldn't talk my parents into paying $200 for the console and this game. A few years back I was fortunate to have found GameTap, and played this through there for about 5 hours. Being on a time limit I was trying as many games as I could and jumped from game to game to get a feel for them. I remember getting a cat, and finding a statue of a man in a dungeon. Beyond that it's a little hazy, and I probably didn't get much further than that. I'm looking forward to getting into this tomorrow night. 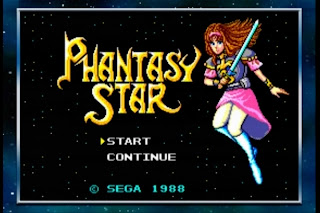 Seeing as how I'm still without a Sega Master System, I'll play through this on the Xbox 360 version included on Sonic's Ultimate Genesis Collection. I've planned ahead and already unlocked the game, which required playing a 2-player game of Sonic the Hedgehog 2 (yes, it needed to be a 2-player game); it seemed odd for unlocking a 1-player RPG, but I've learned that the same person programmed both, so I guess that's connection enough. It's unfortunate there aren't digital copies of the manuals for the games included on this compilation, but I was able to find one online that I'll read through tonight. Tomorrow, I'll play.
Posted by Zenic Reverie at 11:15 PM