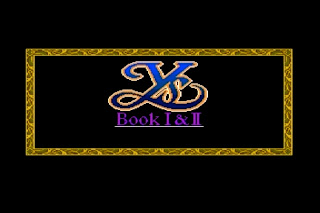 Ys: Book 1 & 2 is a compilation of first two Ys games originally released in 1987 and 1988 in Japan. The two games were originally envisioned as a single game, so this compilation sees that come to fruition. Ys is a series that draws on Falcom's past experience with the Dragon Slayer series, and introduces a lot of the staples for action-RPG and action-adventure games for years to come.
Having only played Ys III, I'm looking forward to playing through this one (or two) to see how the series started off. If only more in the series was released in the US. In my research while making the list I ran across a website dedicated to action-adventure-RPGs. XyZ is named after the three main series the website covers: Xak (released only in Japan), Ys, and Zelda. Since Ys is the only one in the series I expect to play (beyond Zelda II which already passed), I thought I'd mention it now. Unfortunately, the person who created the site seems to have given up on filling out the content (stopped at Xak).


I've been kind of lagging on the posts here, but hopefully things will settle down over the weekend for me to catch up. I still plan on playing tonight and Saturday though. Sorry for the short post here (and late), but I'm eager to get to playing more.
Posted by Zenic Reverie at 10:18 PM