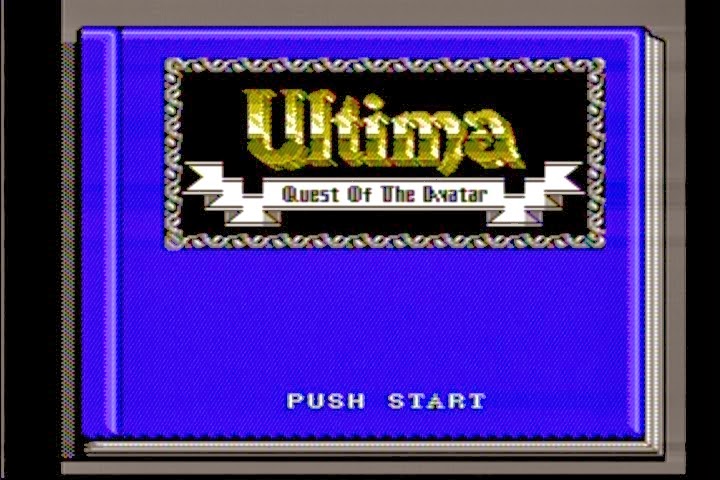 Compassion
The main theme behind compassion is showing love and care for others despite all circumstance. Throughout my journey across the land I found numerous beggars, blind merchants who can't count their own coins, and pubs asking for generous tips. I visited each and generously passed out my gold. The rune of compassion was easily found at the foot of the stairs in the inn, helpfully pointed out by a random townsfolk. I found this early, and stopped by the shrine to meditate. To enter a shrine requires the correct rune. Once inside I had the option to meditate for one, two, or three cycles. I chose three cycles, and received a strange clue about lighting the Candle of Love at the Abyss.
I'm unsure if it was the number of donations, the number of people helped, or a combination, but eventually my compassion value grew enough for Avatarhood. I returned to the shrine and this time chose one cycle, and was informed I had completed my Avatar training in the virtue of Compassion. One down, seven to go... I'm really unsure what the number of cycles has to do with anything. After meditating there's an unknown amount of time that must pass before meditating again. I remember hearing that the PC version requires knowledge of mantras, but so far there's no sign of them.
The only thing I'm missing now from this virtue is the yellow stone of compassion. I'm guessing it's located in the dungeon of Despise, which I'll visit shortly.

Buccaneer's Den offered up a chance for dishonesty through posing as pirates, but I declined. I learned of the location of Mondain's skull, which I picked up shortly after. A hint for the Silver Horn also proved fruitful. I'm really glad no one seems to lie in this game. I also ran into a pirate named Ramsel, who I remembered had someone looking for him. I couldn't inform him of that though, so I suppose I'll have to revisit that location, wherever it was.
At Serpent's Hold I learned the recipe for the Jinx spell (enemy confusion), and the location of the stone of honor (dungeon of shame). I also learned the colors of the stones necessary for Courage and Truth. I'm slowly piecing everything together.
The city of Paws offered up a variety of clues including the location for Rune of Spirituality, and the spell of Reflect. There was also a mention of someone missing in the dungeon of Hythloth, which is located behind the castle of Britannia. Some more locked doors taunted me.
Vesper offered up the guild shop, with keys, and the sextant. I'm guessing the sextant is used to give the current coordinates, which will be helpful in tracking down that secret. I also learned of some serpent scale in a mountain range, although no which range or serpent it belonged to. Lastly, The shrine of humility is south of Moonglow, but the island looks quite dangerous.
Next up I'm going to start exploring a few dungeons. I started on one for a bit and noticed the random battles don't offer gold rewards. This is a pretty far step backwards from Exodus, but to make up for that, they now have treasure rooms where set encounters wait and guard more than one chest. The chests still contain the usual amount of gold, but if I can find a room that has three or more chests and a nearby fountain, I can quickly resolve my gold shortage. The dungeons themselves seem smaller, but it may have been just the floor of this one dungeon I explored.
I also should go back through the towns and search for other secret passages, possibly after I've bought a number of keys. Unlocking random doors, especially prison doors doesn't seem in line with Justice, Honor, or Honesty, but what else is a burgeoning Avatar-to-be to do when faced with no way to ask the nice judge to open up the prisoner's door. It's not possible to speak to characters through the bars, even if they weren't at the back of their cells.
Lastly, there is rumored a whirlpool that will take me to the hidden city of Cove. Just imagine, an entire city of clues, hints, and items just waiting for me somewhere out there. It'll have to wait a bit longer as I've seen no sign of such a location. I'm hoping the whirlpool doesn't move around like it did in the previous game.
In other news, I'm going to start playing on a more regular schedule. Hopefully that also means blogging on such a schedule. I meant to get this post out on Saturday, but some family came into town and ate up my whole weekend. It may happen again in the future, but hopefully it's not more than a monthly occurrence.
I'm also gearing up for some of the upcoming titles, and to make room for them I'm planning on selling some games. If you're interested in helping out by buying some I'll send you link to what I'm selling (most games are unrelated to this blog, but some are duplicates I've gained in lots). At the end of this gaming year I'll actually start selling off past games played on this blog. Check back on the year transition post for news on that.

Edit: Nicolay Garkusha helpfully pointed out that this game was also available on the SMS. Published by Sega, which is a more faithful port of the PC game. Although you don't type commands, the basic topics of Name, Job, and Health are presented as menu options when speaking to each NPC. This is contrasted with the single Talk command on the NES. I'll test drive that version and PC, and report more on the differences in the final rating post. Going forward, I'll do my best to mention other versions of the game and why I chose to play the one I did. In some cases, I may even open up polls so readers can vote for the version I play. Yet another topic for the end of year post.
Posted by Zenic Reverie at 8:47 PM