Game 26: Rings of Power (Genesis) - Every Other Game Has Rings It Seems 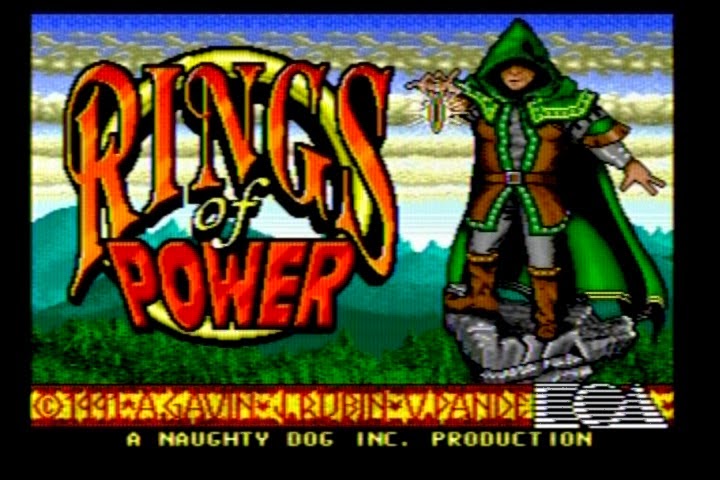 Rings of Power is one of the few games where I don't know what to expect. I haven't played many of the games on my list, but I've at least heard something about them. This one, however, has gone under the radar in such a way that all I really know is it is difficult, and it's easy to get lost. After reading the manual I'm looking forward to the challenge.
A battle between Nexus (bringer of a golden age) and Void (usurper and harbinger of the dark age) resulted in the Rod of Creation separating into 11 parts, known as the Rings of Power. That was 500 years ago. Rumors have surfaced that the black priests of Void seek the rings to recapture their power. Thalmus, headmaster of the Sorcery Academy, has put the task of collecting the rings to Buc, a young apprentice.
The manual fed me enough intrigue that I could hardly wait to start playing, and now that I've sunk in some hours I'm eager to get back. I don't want to get too far ahead before writing something up though. Beyond basic controls the manual described each character, transportation methods (and how much food/water they consume), and some hints written from Thalmus' perspective. There's also a small walkthrough, which I've avoided so far.
While there's a lot of detail in the manual, the game has done a good job of covering the same information. Every character in the game has some talent for a discipline of magic. Knights have separation spells, which tear apart objects. Archers use force to propel objects. Necromancers' spells have to do with the body and including healing forces. Enchanters have the ability to transform reality. Conjurors summon power from different planes of existance. Sorcerers have control over the mind. Each discipline has a corresponding academy where I'm to seek out a specific individual to add to my party.
Detailed in Thalmus' hints are where to start looking for each ring. There's one ring for each discipline, an second ring for each magical discipline, and third ring for sorcery. The game also came with a glossy map of the world, called Ushka Bau, that shows the name of most towns and important locations. To reduce costs outside the US, you had to purchase the map separately (the manual also didn't receive a full color print in other countries).
I noticed the manual available online cuts off at page 66, which misses most of the hints. Here's a quick summary of them all for anyone interested:

The time really flew while playing and exploring, but I think I have a handle on the game now. I should progress much faster going forward. A couple of random observations so far leave me with mixed feelings about the game. First, there's no equipment, only spells to purchase. At the same time I've been strapped for cash since I didn't invest in trade goods right away, and there's a constant need to purchase food and water (at least I think it's constant as I'm unsure what happens if I try to go without it). Second, I don't really see any stats beyond HP and MP. Supposedly spells will do more damage as I level, but I didn't notice a difference between 1st and 2nd.
I have many other clues and leads to go off for many more hours. There's a waterfall at 30' 1" 5' 4" where I'm to find a lead for the Ring of Calling. There's an expert on the Ring of Division at Cathedral. A sorcerer at the City of Mind will tell me more about one of the rings if I return with the Mirage spell (purchased at Magic B Us... I swear I've heard that joke before). I need to get a handle on the trade good situation to build up some of my funds though if I'm to get any further.
Elapsed Time: 2h40m (Total Time: 2h40m)


Edit: Raifield noted that the images look a little blurry. This is probably due to my capture hardware upscaling all images to 720 x 480. If I choose any other resolution it doesn't detect the source unfortunately. First is the original, followed by a conversion to 320 x 224 (standard Genesis resolution). 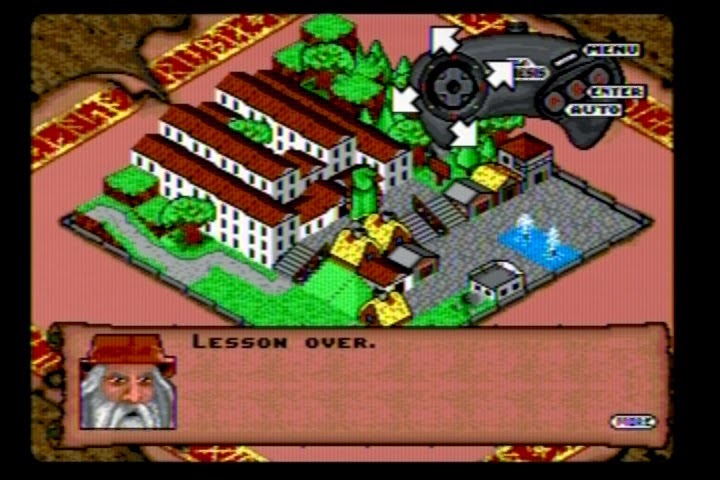 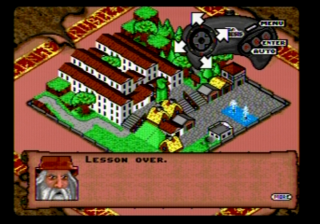 Let me know which is preferred, and I can add in a step to convert the images if necessary. I don't think there's much difference when viewing them on the blog, but if you click on the image you get a full resolution display.
Posted by Zenic Reverie at 8:21 PM