Game #52: Dungeons & Dragons: Warriors of the Eternal Sun (Genesis) - This Spot Is Reserved For 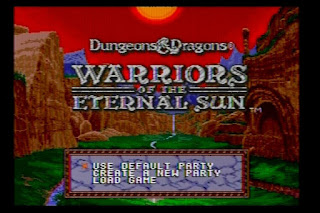 Elapsed Time: 13h46m (Final Time: 13h46m)
Combatant - Combat was challenging in a way that required abuse of the mechanics. Kiting around enemies was necessary because the alternative was almost always death. Enemies were a hodgepodge of monsters from the D&D manual, plus some humanoid tribes. While stats do come into play, it's really the ability to dodge back in forth in dungeons that wins the day. Experience varied by enemy, but only the character that killed the enemy gained the majority of experience. Gold was only gained from outdoor combat with humanoid enemies.
Rating: 5
Admirer - The controls worked well for this style of game. The character selection had a nice range, but the only customization option was choosing one of four colors for each character. Equipment wasn't displayed on the characters. No advancement options (no dual classing), but any party could easily beat the game. Well, maybe not thieves and magic-users solo.
Rating: 3
Puzzler - I honestly had trouble following the main quest in the beginning, but only due to one piece of dialogue that dissuaded me from crossing a bridge. There were a couple of necessary points to hit that could confuse some players. Without an elf the required secret doors had me thinking I was stuck in the pyramid. There weren't any puzzles to solve, and a single solution to the game. While there weren't exactly any side quests, there are a lot of secret areas and hidden caves to explore.
Rating: 1
Instigator - The game responded to my actions, but the main story was a bit light. The NPCs are hardly helpful in progressing the game, and definitely weren't helpful with the main quest (except for Marmillian). There weren't any descriptions, and I had to name most locations on my own.
Rating: 2
Collector - There are a lot of items, but they're difficult to collect. Inventory space is limited, and there's nowhere to stash them. Dropped items appear on the ground or dungeon floors, but disappear as soon as the map changes. The economy is always useful for upgrading equipment up until the point where the town gets destroyed. Judging the best equipment is done automatically for armor (seriously, the game auto-equips the best armor), but difficult with weapons. (Sure +2 is better than +1, but is a spear +2 better than a sword +1?)
Rating: 3
Explorer - It's a nice world to explore. A bit too open and empty, but at the same time most of what's to be found is hidden. I enjoyed my treks back and forth from town to cave. Random enemy encounters appear while exploring. There isn't anything that stands out as extraordinary, but it's cool to see such an open world. The caves do tend to have plot locks unfortunately.
Rating: 6

Final Rating: 20 [33%]
I'm not sure if I was being kind to this game because it wasn't Wizardry, or if it really deserved the praise I gave it. The score doesn't really reflect my enjoyment. It's an interesting game, but I can see why it might not have done well enough to garner a sequel. It's a solid game engine, and could have been reused to bring other first person dungeon crawlers to the Genesis.

Now it's time for a couple RPGs from my youth. Of course, I played the PC version of Pool of Radiance, so we'll see just how much has changed. I'm expecting another long one in any case. Then we'll cut The Legend of Zelda: A Link to the Past before heading into Arcana.
Posted by Zenic Reverie at 6:43 PM