Below the Cut: The Immortal (NES & Genesis) 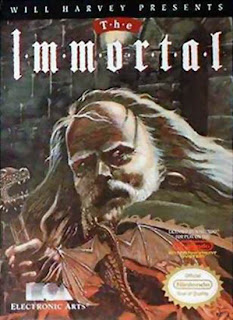 The Immortal started out as an early online multi-player game in the late 80's. During development it became a single-player game. The game has a unique mix of action-adventure and action combat on a separate screen.

Released on various platforms (DOS, Apple II, NES, Genesis, etc.) the game was given high reviews, and the NES version was purported to have some of the best graphics on the system. Many of the death scenes were toned down for the NES version however, and one of the levels was cut entirely. There are eight levels in linear progression littered with traps, riddles, enemies, and treasure.

The player controls an unnamed wizard in search of his teacher. There's no character progression, and combat is a simple dodge and strike slug-fest; however, there are ways to avoid combat such as casting fireballs that instantly kill, or luring an enemy into some of the traps. Only items are found, many of which are used to unlock the way further into the depths of the... whatever the place is.

I fondly remember this game, and I'm not really sure why. I'm fairly certain that I needed to reference the Nintendo Power guide that laid out the order to cast spells at the end to win. How I made it that far, I'm not really sure. Most likely I just jumped to the end, or loaded a game near the end.

I was looking forward to this one, but it's more action-adventure than RPG. Death is everywhere with instant kill traps, and combat that takes some skill to come out of unscathed. Maybe some other time, this one probably would have taken a while to get through alone. Good luck to anyone that wants to take a shot at this game, it's fun yet hard.
Posted by Zenic Reverie at 9:53 PM