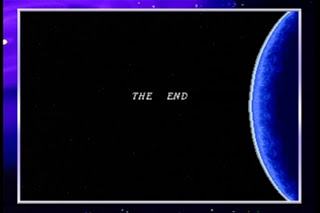 I bet you weren't expecting this post so soon. I decided to push through to the end without another post about how there's basically no additional plot points beyond, "here's a prism, go dungeon crawling."
Last I left it, there was only one small area on the Dezo over-world left to explore. There I found a crevasse. On the other side was the strange man mentioned by the Dezo people. Lutz, previously known as Noah in the first Phantasy Star, welcomed Kyle. He has been watching over Algo for 1,000 years, ensuring the line of Alis would live on to save the star system again (minus one planet). He even once saved Kyle from a spaceship collision 10 years prior. It seemed someone was trying to end the line of Alis, and seize control of Algo.
In order to stop the nefarious plot, I'm tasked to find some enchanted items called the Nei equipment. Wait... Nei? As in, my fallen companion Nei? No, she's actually not mentioned and the game never explains a connection. Maybe it's just coincidence. I was given a prism, which unlocks four new towers to explore. You see, they were invisible and intangible before and now they're not.
These last areas range from mildly annoying to 5 hour slogs (less if I used someone else's map). Nothing too difficult, only time consuming. Combat is what really drags on. Not much thought needs to go into how to handle each fight, and by the end of the game I wondered how the final battle(s) would deal with an otherwise lacking combat system. While spells are helpful, I'd be out of them by the time I reached the actual dungeon if I relied on them heavily.
So, instead I spend a good minute or two each battle. Now, I know part of this is my own fault. I got rid of Rudo (Luke), which is huge chunk of damage and tanking gone. I suspect he would rival Kyle for damage dealing by the end. The game pretty much told me who I should have in my final party by giving me the Nei Shot, Nei Crown, and Nei Slasher, which are only usable by Rudo, Amy, and Anna respectively.
After collecting all the Nei items, I returned to Lutz and was given the Nei Sword. Lutz then offered to transport me to the final dungeon. This dungeon is actually rather simple. Going the wrong way usually brings about a dead end quickly. Like a few other dungeons, this one is lacking treasure chests; however, a mimic style boss tempts the unwary traveler. It seemed out of place, as the only treasure that blocked my path in the entire game. I prepared myself for a fight, and, on the advice of Sean (once again), saved my game.

The first round went to Dark Force (the game doesn't name him, but that's my best guess), but I was victorious in the second. Dark Force is definitely the hardest fought battle up to this point. His attacks either turn a party member evil or damage everyone for about a third of max HP. Evil characters have a high chance to do nothing for their turn.
I haven't decided if my first attempt was very unlucky, or my second was extremely lucky. Maybe both. The only thing that makes this fight manageable is the Nei Sword, which has a small chance to dispel the evil presence from the party and this happened zero times, or in the case of my second chance, nearly every time the party had fully turned evil. I was a little worried by having burned through all my Star Mist [heals party fully], but I pressed on.

Mother Brain was waiting for me just around the corner; however, I thought it best to fully recover first, which meant another trip through the dungeon. For this final battle, I fully expected a tougher fight than Dark Force, which is exactly what I didn't get. Mother Brain is pretty much a pushover. She has two attacks as well, hit everyone or hit one. Everyone in the party could heal themselves more than she could hurt them. A battle of attrition began and ended with the inevitable.
With Mother Brain defeated, it was time to leave. Mota needs rebuilding. But wait! Lutz tells me there's someone else on this space station. Could it be... Nei? No, it turns out it's just a bunch of humans that were behind Mother Brain all along because they had tarnished their home planet of earth, and came to this star system in order to control the evolutionary path of the people of Algo. Well, we won't let that happen! Cue the slaughter of the last remaining humans.


Somehow I fully expected Nei to return at the end. Why are all the final equipment named after her? I still don't know what the GR Sleeves item was supposed to do. Well, time to read up on walkthroughs and make a final rating post. Thanks for sticking around. I'm going to update the poll afterwards, make some cuts to the list, and finally start up the next game this weekend, Final Fantasy.