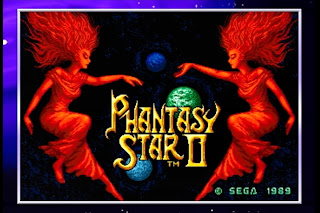 "I had the same dream. A nightmarish vision of a giant demon and a woman warrior locked in combat. I'm but an observer to this, unable to act in any way. The horror releases a flurry of blows, and I awake with a start. I am alone in my room, the early dawn showing through the window. I'm Kyle, an agent of Paseo, capital of Mota. Shaking off the dream, I rise for the day ahead. I've been called into the commander's office to report for a special assignment first thing this morning.
The commander confides in me that he is having reservations now about the trust we've placed in the hands of Mother Brain to plan and control our future. Born of the biosystems lab, many monsters have invaded the surrounding countryside. Controlled by Mother Brain, this should never have happened, but it has. We must recover a data recorder at the lab that will tell us how the monsters were created. I say 'we' because while preparing for the journey, Nei insisted on accompanying me. I took her in some months back; I'm not really sure where she came from, but she didn't deserve the scorn and ridicule every laid on her just because she's a halfbreed of humans and the bio monsters from the lab."
I forgot to mention the release of the Sega Genesis back in 1989, a full two year head start on the competition, it was hoping to out do Nintendo by offering arcade ports of many popular games. It was also competing with the TurboGrafx-16 at the time, and had a price point $10 lower at release in the US. It usually takes 2 - 3 years to see anything other than ports or first-party RPGs come to console, so we'll have to wait to pass judgement on the console. I do hope it offers more than the SMS (hint, it does).
Phantasy Star II is the first RPG on the Sega Genesis (Mega Drive to the rest of the world), and a direct sequel to Phantasy Star. Direct probably isn't the best word to use since it picks up the story some 1000 years later after the events of the first.

The Algo (shortened from Algol) Star System is now run by a giant computer named Mother Brain. (With both this game and Metroid mentioning Mother Brain, I wonder if this is a cultural reference of some kind.)

All of the planet names have been shortened as well. Alis' home planet of Palma is now Palm, the previously dry desert world of Motavia is now a lush fertile world called Mota thanks to the biolab, and finally, the icy and desolate Dezoris has become the mysterious and mostly unknown planet Dezo.

My first task was to name the lead character. Not giving it much thought, the first four letter name that came to mind was Kyle (default name is Rolf). The game offers the option of renaming each character as they join the party, except for Nei. I'm going to take full advantage of this, and name them all differently, to protect their true identity.

Before venturing too far, I explored Paseo and gathered as much information as I could from the library and townspeople. Not much was really of note, but the manual mentions any tidbit of info could prove helpful later on. I have a bad habit of not taking notes, and not mapping, especially when there's no grid. I really should correct this: map everything, note everything, and not worry about taking my time.
I noticed right away in the first combat that Nei didn't come with a weapon (actually I noticed in the equip menu, but figured she'd fight with fists... she doesn't). I'd definitely have to take care of that. Luckily Kyle had Foi, an offensive spell, that could take out an enemy with a single hit. I used this to get some extra cash (Mesetas again) to buy her a weapon. Our combined forces got us as far as the first town, Arima.

Arima had been hit hard by a band of scoundrels. Using dynamite, they blew open most of the houses, leaving them in heaps of rumble devoid of valuables. Once here, I headed back home to find Rudo (short for Rudolf) offering to join my cause. I renamed him Luke and accepted his offer.
The next couple hours were a blur of grinding through the first dungeon, finding the key item to get into the second dungeon, and a run in with bad luck. I realized that I hadn't saved for a good while at the exact same moment my party was wiped during the last fight before heading back to town. My save is about an hour into the evening, looking at my party, I did manage to save after purchasing a shotgun for Luke, which is where the tide in battles really started to turn. I've since learned I can dual wield hand weapons, so that's what I'll be doing for Nei and Kyle.

If you couldn't tell, my second bad habit is not saving regularly when visiting towns. Unlike the first Phantasy Star, there's no save anywhere system. Granted the port I'm playing offers save states, but I'm not going to take advantage of them. I'm forcing myself to only save in towns with the memory bank (save point). It was a hard lesson to learn, but 2 hours lost will hopefully teach me to save at every opportunity.
One other change of note is the lack of first person dungeons. The technology that was so praised in Phantasy Star on the SMS was dropped for Phantasy Star II (and possibly the rest of the series). Battles are also now in a slightly third person over the shoulder perspective from the party. I'll get more into combat in a future post, but there are quite a number of changes to the system.

Even though the world seems small--and so far there's no mention of traveling between planets--I have hope things will open up. There are after all more party members that will join my merry company than can fight in the four person expedition. I can only guess they decide to move in with me because that's where party management occurs.

Since having written up the above, I decided to put the time in to get back to about where I was last night. It only took an hour to make the same game progress, although I'm short a couple of levels, and some extra gold. I've had a much easier time thanks to dual wielding bars on Nei and knives on Kyle. I hope my previous encounter with the Blasters was a fluke, and I can find a way to up my defenses or something before facing them again.

I also want to mention that there was a hint book, and maps that came with the original game. It's hard to tell what originally came with the game and what didn't though from the online resources I've found, so I won't be using any maps. The fact that they call it a hint book dissuades me from using it, so I'll refrain from either resource. The manual is my only reference material.