Combatant
Double Dungeons is a very competent, basic, dungeon crawler. There's no fluff, no filler, nothing more to it. The simplicity of the design is really where most of the points come from (and where they're lost). I'm glad we start with combat because I suspect this is where the highest rating will fall.

Combat is balanced, and not an easy task. I wish there were more options than holding button I (TurboGrafx has a built in turbo button feature, which saves me from mashing all the time). Whether or not a battle falls in my favor is heavily dependent on hidden stats, but I don't know how much equipment factors into that. The enemies become more detailed and varied the further you get, with each dungeon providing at least one new sight. Lastly, the rewards from later combat aren't well balanced, and more often than not aren't worth the long battles. Stick with the quick grinding.
Rating: 4
Admirer
If I hadn't played a 2-player game, then I wouldn't even had known there was a character sprite (two in fact). But, this category isn't all about how the characters look. It's about how much control I have over the development of the characters. Can I control how quickly they grow in strength? Can I change their appearance? Can I choose different skill sets or paths of advancement? In a nutshell, how much control do I have over the character I'm supposed to control? In a game as simple as this, I can really only give points to the silky smooth movement and the fact I drive the choice of which monsters to take on.
Rating: 3
Puzzler
There's really nothing beyond combat. The quest is simply the same for each dungeon (find the key and beat the boss). About the only puzzling part is writing down the clues for the final dungeon and piecing them together. No puzzles, no side quests, nothing but the grind.
Rating: 1
Instigator
Congratulations Double Dungeons, you've earned the first '0' in any category. This story is a mess of disjointed incoherent ramblings the majority of the time. We learn of a Vandess character causing all the trouble and go off to kill him. Without the manual I can't say this is explained any better, but I can't imagine any redeeming value. No NPC dialogue, no descriptions, just endless dungeons of twisty passages that all look the same.
Rating: 0
Collector
There are a good number of items in later stages, and many of their names elicit some intrigue (such as the devil blade and armor). However, this means very little as the interface is quite limited. There are only six item slots, one weapon slot, and one armor. Just bought that giant scythe and picked up a short sword from a chest? Well, say hello to your new short sword. Same goes for forgetting to sell a weapon or armor before replacing it in the store. Gauging the relative strength of equipment is fairly easy based sell price, although some later equipment sells for zero. The usefulness of gold goes up and down, but it's enough of a struggle that it doesn't ever become completely useless until the end of each dungeon as I tried to assail the boss. Dying causes all gold to drop, and there's no bank to save it.
Rating: 3 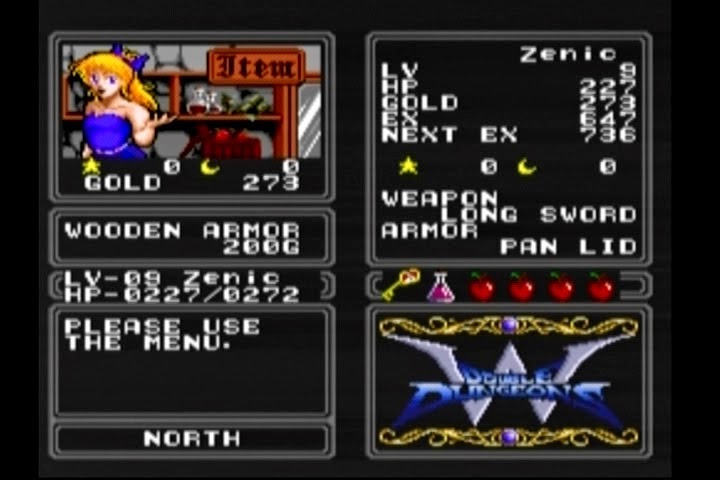 Explorer
I expect most dungeon crawlers to fall short on exploration. Double Dungeons compounds this by showing no variety in dungeon textures or color. The environment falls a bit flat with only a single tune for dungeons. one for shops, and one for the boss. The epilog music is the best (which is looped at the end screen). There's little to discover that gave me any kind of 'wow' feeling. There's just not much here.
Rating: 2 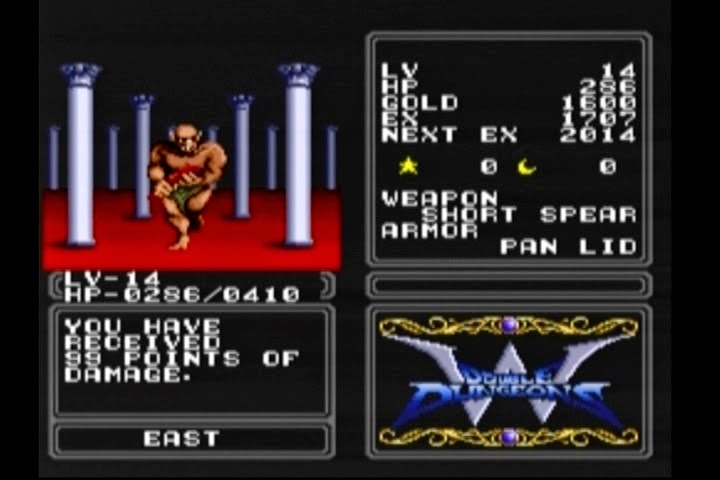 Overall this is a basic no frills dungeon crawler. The best thing I can say is all the dungeons are short. Even the later dungeons wouldn't run more than an hour. If they do, there's a save function (a password function) that allows you to continue your progress later. It's a bit of flat note to leave the year on, but now we get to move on from dull to seething rage as I try to get through Heroes of the Lance on NES. Well, rage may be too harsh, but I'm sure I'll encounter my fair bit of frustration.

Before we get there I need to get a few things in order. There's a speedrunning marathon coming up on the 10th of May. I need to focus on practicing my game as much as possible until then. I'm going to be playing Mysterium for the Game Boy (a game I'm cutting from the blog).

I'll get a post out about the next year of games and I should be able to squeeze out a cut post for Rolan's Curse over the next two weeks. I'll start Heroes of the Lance on the 12th, blog post to follow naturally.
Posted by Zenic Reverie at 8:07 AM