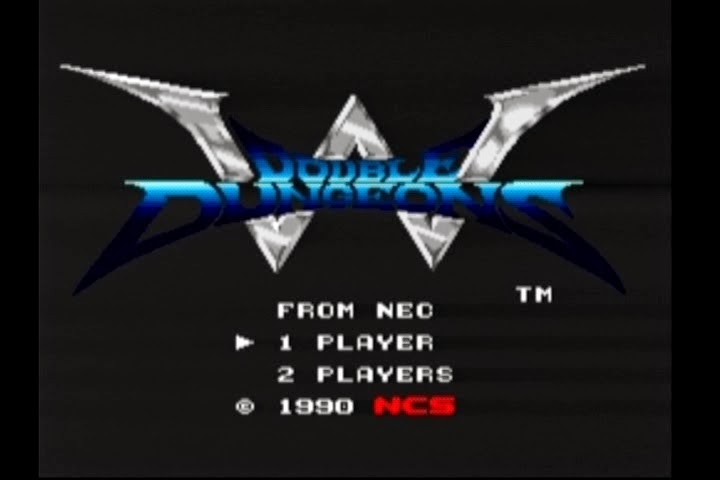 I imagine this game came about from a short description of a dungeon crawler boiled down to a one-line pitch. Maybe less. You explore a dungeon, level your character, buy equipment, and fight enemies. Done. Ship it. Actually, you explore 22 dungeon scenarios, all using this same formula. Variation? Who needs that? For those curious, and because I did the math, the game scores a 10 or 11 (depending on how generous I'm feeling) out of 19 on my "is it an RPG" scale. Just over the line, so let's do this.
Before we do though, there are a couple of things I'd like to disclose up front. First, I've broken one of my rules, and I'm using someone else's maps. The game is dreadfully boring as it is, and I'd rather not inflict the tedium on myself or others by spending time making my own maps. I will however, verify the maps and make corrections as I find them. In cases where I've corrected something I'll post the corrected version. Second, I'm not going to do a play-by-play of my play sessions because I'm playing this one a bit differently. In case the title hadn't clued you in already, I'm going to create a speedrun for all 22 dungeons. The dungeons are as separate as can be: nothing carries over, all are book-ended by a short prose, and the game resets after every dungeon to the title screen.
Now, for those looking for a more genuine first time experience, please check out Shen Nung's playthrough. He does an excellent job encapsulating the feel of the game in its simplicity with concise prose. His thoughts echo my own during my first time with the game back when I first started this project (nearly 3 years ago). It was a dark time of choosing games at random, and calling a short two line update a blog post. Even though I deleted the posts, I left the Double Dungeons videos on my YouTube for the curious. I locked down the other game videos though because of music copyright claims... I no longer post full game videos on YouTube (no one really commented on them anyway).
Beginning a Speedrun
The first step in any speedrun is to play the game. Become intimately familiar with the mechanics so that if any problems come up adapting to the current situation becomes second nature. This means playing the game a lot. In the case of Double Dungeons I've already run through the first three dungeons multiple times, and completed the entire game once.

Each dungeon begins the same way, start at level 1 with a dagger and pan lid, grind on low level enemies until I can purchase the best weapon in the shop (so far a long sword), continue to grind until I can afford the best armor (wooden armor currently), and lastly attack the boss (might require healing items). Sounds simple enough, right? Right. There really isn't anything difficult about this game.
Monsters stand in static locations, and only attack while you're facing them. Normally combat follows a trade of blows, but if you stand still long enough the enemy will get a free attack. Once an enemy is defeated the space it occupied remains free to pass through for a short period of time. How short is determined by... something.

I haven't quite figured this part out yet, and if I could, then I would definitely increase my chances of optimizing a speedrun closer to the second. As it stands I've noted the respawn times can range from 11 - 29 seconds, except for those monsters that never respawn. Since I can't depend on enemies always being around I've decided on a hunting path that takes me through multiple enemies in a short amount of time. As an example, here are the first three dungeons.
Dungeon 1 - Goal: 9 minutes
Each time I start a new dungeon I list out the monsters, how much exp and gold they give, and at what level I can competently dispatch them. As an example here are the monsters for the first dungeon:

This notation allows me to quickly glance at what monsters I should take on when, and quickly add up the gold I'd get from clearing out a specific section a number of times. The #/# is experience and gold, and the L# is the base level I tested and following that the weapon or armor I had equipped. The last value is the average HP I can expect to lose. This last value goes down dramatically with more levels, and only somewhat with better equipment. Something I've considered adding to this list is the average time it takes to kill the monster. It's possible killing more slimes, bees, and spiders will make skeletons obsolete since it takes longer to kill it even at level 5.
Early in the level I can manage to reach a sorcerer, and can take him out as low as level 3. Most monsters in the first area give 4 or 6 exp, but the sorcerer is worth 14. I quickly raise to level 4 and add in a skeleton for a bit of extra gold. The skeleton drops 10 gold as opposed to the sorcerer's 8. My aim in the beginning is to collect enough to afford the long sword. Once I have the sword I'm usually at level 7 and able to take on one marsh snake. This is a tough fight, taking about half my HP; however, the experience and gold rewards are well worth the effort (plus there's one guarding the path to the boss).

HP is refilled at every level up (strangely calculated before max HP is increased), and it's one of the keys to continuing a good run. There are limited healing items, and a stay at the inn costs 100 gold (too much for the 400 - 600 I expect to get throughout a dungeon). At this early stage in the game only level ups are reliable for healing. There are also random items dropped from monsters like a healing potion (40 - 60 HP) or apples (5 HP), which typically help to offset some of the riskier fights.
With the snake out of the way I'm able to fight more skeletons, a giant leech, and take out a hawk in the way of the final boss door. By the time I make it there and back to the shop I should have enough for the best armor. Levels tend to offer better increases than equipment, but take longer to acquire. With the best sword and armor I've found I can take the boss out at level 9 with the help of a full heal item found in a chest (called a refresher). Bosses are behind locked doors, and finding the keys while not too difficult is something to keep in mind as the dungeons become more complex. I currently have a good run of this clocking in at just about 9 minutes. I'll probably aim for less than 9 minutes as a nice rounded goal.
Dungeon 2 - Goal: 10 minutes
Dungeons often share a number of monster types. Green slimes, killer bees, death spiders, sorcerers, and skeletons appear again and again. Their stats remain the same. New to dungeon 2 are the following:

Goblin - 5/5 - L4 (10 - 20)
Killer Ant - equivalent to a Killer Bee
King Spider - 12/8 - L3 (4 - 6)
Iron Head - 24/40 - L5 (10 - 20)
Death Crow - 19/38 - L6 w/ LS (20 - 40)
Guarder - 36/42 - L8 w/ LS + WA (170 - death)
From this it's pretty obvious I want to kill king spiders all day long. They're quick to kill, I can get them early, and they provide great experience. Unfortunately there's only one in the dungeon accessible early on. Another does open up once I'm able to take on a guarder (one blocks the way to the boss). Goblins are slightly better than the killer bees, but they do more damage and take longer to kill so they're best avoided until level 5 or 6. The iron heads do not respawn. Same with the death crows. Guarders as well, but those aren't worth the grind.
Currently my route carries me south and around the bottom of the map to the king spider as quickly as possible. I should reach level 4 rather quickly on my first loop. By the time I get back to the king spider again I'm usually approaching or achieving level 5 and head straight after all the Iron Heads. By the last one I have enough for the long sword, and reach level 6. I round up on the two crows, picking off the king spider as often as I can. I swing by to get the Wooden Armor.
If I'm feeling lucky I'll try my hand at a guarder or two as soon as I hit level 8. I've tried it at 7 and it just hasn't worked. I want to reach at least level 9 for the boss, and have 4 healing potions. There's no free refresh, so I'd have to buy one for 300 gold. Healing potions are 40 and having 5 of them is equivalent to a single refresh (except they take up 5 out 6 item slots). In my experimentation I've found I really only need 4 for the boss (a little less grinding is always nice). I've only managed a time just below 11 minutes, but I think this one has a lot of room for improvement. Expecting sub-10 minute time in the end.
Dungeon 3 - Goal: 9 minutes (or less with glitch)

The map for dungeon 3 is a little more restricted than the others. Only slimes, skeletons (too powerful), and a single sorcerer are options. There's a killer wolf nearby, and I clear all of them out once I reach level 5. The pumpkinheads and especially the mummies are definitely not worth the trouble. Unfortunately a mummy blocks the way to the store, and a pumpkinhead blocks the key. There's a second mummy before the boss, but easily dealt with by the time I reach level 9 with LS + WA. Once again the boss easily falls at level 9 (I've actually been reaching him at level 10 for some reason) with the LS + WA and four healing potions.
This is easily the fastest level. There are three sorcerers and four skeletons all in a close area. Two of the sorcerers are blocked by a skeleton though, so getting to them once I reach level 4 is a priority. While fooling around on this level checking out the co-op feature I stumbled upon a glitch. This glitch allows me to walk through enemies. It's a little tricky to get working since I haven't played with it enough to understand what's going on. I'll go into more detail on it in a future post once I have more experience with it. In general though, I don't see it as useful since I still need to build up levels to have a chance at the boss. I can see it's usefulness getting past the mummy to purchase a long sword and armor so fighting him is faster.

I'm not sure I'll continue the in-depth analysis on each dungeon, but I hope this gave some insight into the game mechanics and the process I use for speedrunning a game. Next time I'll write a little more on honing a route from the general plan. Then I'll follow that up with a post on glitches, and I'll take a closer look at the glitch. If necessary I'll wrap it all up with a nice talk on the community. Unfortunately I didn't have much time to play over the past week, but that should change now that I've finished posting for Ultima and cut Final Lap Twin. I don't plan to spend too long on this game.
Elapsed Time: 2h35m (Total Time: 2h35m)
Posted by Zenic Reverie at 8:18 AM