Exploration and discovery are a large part of RPGs. Learning how to explore as part of this experience is often frustrating; however, that frustration is potentially limited by good documentation. Luckily I have the manual for this game, but that won't always be the case. So, I like to spend my first hour exploring the game without resorting to the manual to build up skills to decipher the controls. I don't know how well this is working in practice.
The wise man previously mentioned he'd meet me next at his meditation spot on Mt. Sabre. Mt. Sabre is a snow covered mountain range that seems to encircle this valley with entrances to the south west and north east. Nestled throughout Mt. Sabre are a network of caves crisscrossing each other in confusing design. The monsters inside alternated invulnerability between wind and fire, which necessitated entering the sub-screen multiple times in a single passage.
At the top I found the wise man waiting for me, but he only had another quest for me: find the Tornado Bracelet. I learned from Stom that the bracelet is somewhere in Mt. Sabre. Even with the maze of caves I'm fairly sure I'd been through all the walkable areas. I searched again and actually found an ice wall I hadn't destroyed. It was only a way back to the village of Leaf though. There I learned the people of Leaf were all taken away.
The only places I'd not explored were the ice slides. They were too slippery to walk up, so I figured there must be a piece of equipment to keep traction while scaling them. Some kind of spiked boots or similar item. I consulted the manual for two reasons at this point. Maybe it'd have a hint for this area, and I hadn't figured out how to use the Rabbit Boots. I suspected figuring out both would solve my current predicament (even though jumping up icy slopes doesn't sound very logical).
The manual describes all items in detail and lists out every area in the game (by the end of this post I'll have finished area 3). Here's what the manual says for the Rabbit Boots, "Enables you to jump." Well, that's all well and good; I have them equipped, now how do I jump? Normally the 'B' button uses an item (e.g. the alarm flute, medicinal herbs, and to return the statue), but this time I only slashed out my sword. I check all other buttons: the 'A' button used magic, the select button brought up the sub-screen, and the start button brought up the status screen (there's also the save/load screen reached by pressing start from the sub-screen).
I can't pinpoint the exact moment I thought to disable my current spell. There's no mention of this in the manual that I found, and I've had magic longer than an item to use with the 'A' button. Looking back through the manual a third time, there is this side note, "When you select a specific item on the Sub-Screen, press A button to use it." Cryptic much? Still, no mention of deselecting magic to use an equipped item.
In any case, the Tornado Bracelet was indeed at the top of one of the slides. Retrieving it proved myself to the wise man. He bestowed the teleport spell and lifted the barrier from the second entrance to Mt. Sabre. I headed straight over and found an odd sight. An inn rested at the base of this side of the mountain. How had they been able to penetrate the barrier?
This next area of Mt. Sabre was even more labyrinthine than the first. I swear one direction wraps back to the beginning using the wall trick. There were guards in this area, the same ones who kidnapped the villagers of Leaf. Once I got on the right path, I found the villagers and freed them all; except the mayor, who was the personal captive of the general. By freed, I mean opened the door while they continued to mill about their prison cell.
I found General Kelbesque waiting at the summit. I had a tough time with him. He moved around the screen in a hard to dodge pattern while upsetting the ground, which created projectiles that targeted me.
I was my own worst enemy though, as I consistently fought with the mindset that I needed to use the charged tornado shot to defeat him. He'd trap me in a corner while charging up my shot, and I'd quickly lose all my HP.
The first time this happened I realized I hadn't saved since I started playing. All that progress lost? No, luckily the game has an auto-save feature. Selecting 'continue' from the title will restore your character to the last safe screen (or close enough). I believe that's a first time I've seen this in an RPG on the NES, and it saved me an hour of getting through all of the above again.
Once I stopped focusing on using only powered shots, I was able to keep my distance with some timed slashes and smart use of Refresh. I recovered the Flame Bracelet, which causes an area of explosion directly in front of my character, and shortly after saving the mayor I received a telepathic message that I was granted the spell Paralysis. It's supposed to be useful in the next town. 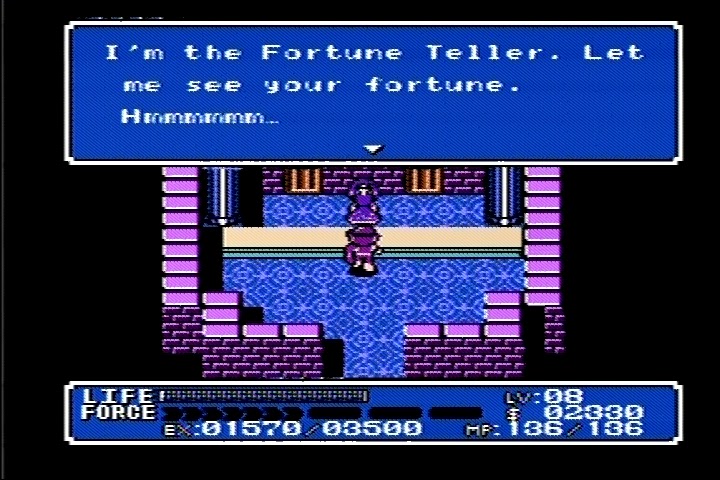 Just outside the cave exit is the town of Portoa where a queen with strange powers is said to reside. There's also a fortune teller, who keeps pointing me towards the queen. The queen has little to discuss. After traveling between the two a number of times I decided to call it a night. 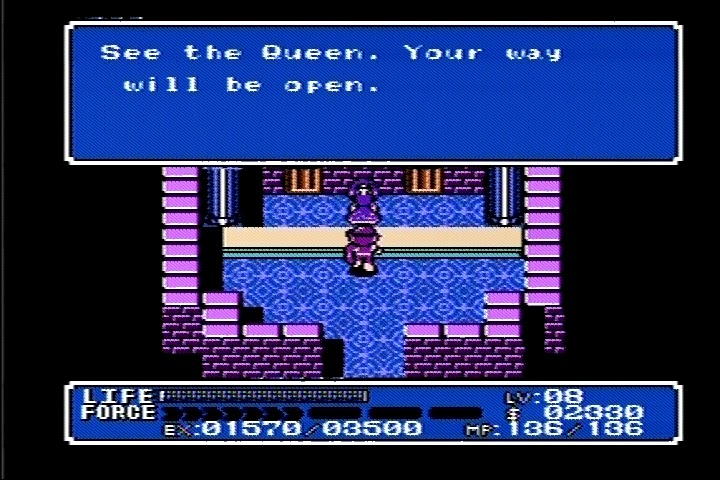 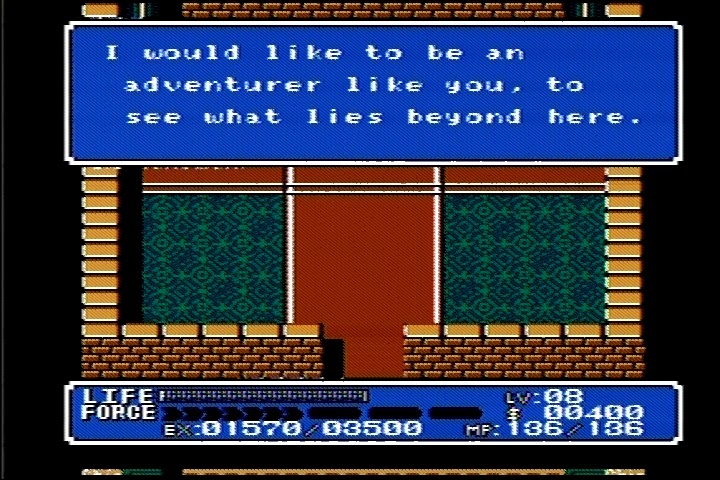 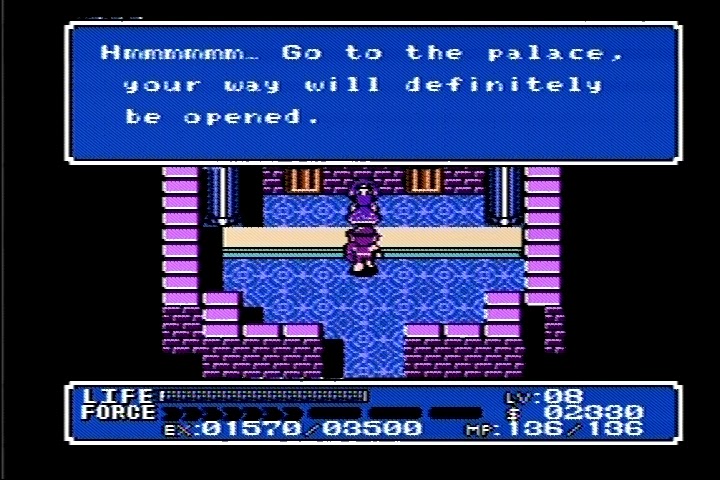 Email ThisBlogThis!Share to TwitterShare to FacebookShare to Pinterest
Labels: Crystalis