Game 16: Dungeon Magic: Sword of the Elements (NES) - For the Love of Nostalgia 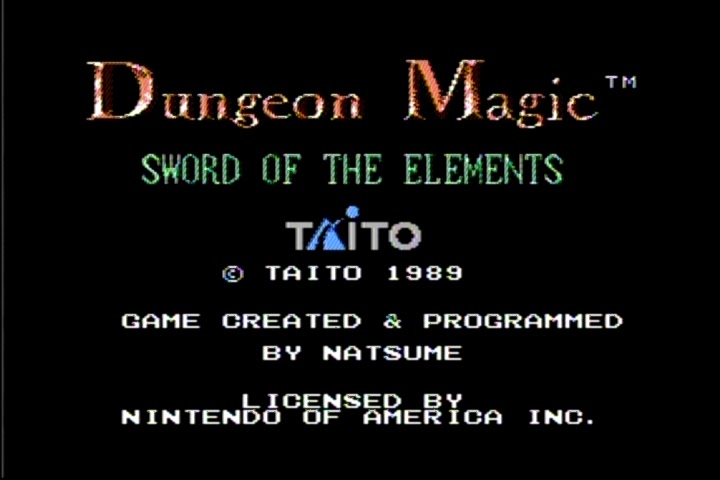 Title: Dungeon Magic: Sword of the Elements
Released: July 1990 (November 1989 JP)
Platform: NES
Developer: Natsume
Publisher: Taito
Genre: Action-RPG
Exploration - First-Person
Combat - Real-time
Series - Standalone
I remember having a lot of fun with this game: creating spells with the runic magic system, mapping out all the dungeons, and being immersed in the story. Now that I've begun playing it again I can only assume those are false memories or I'm thinking of a different game. All the details are present (runic magic, mapping, some kind of story), but a lot of the fun is missing. I'm honestly not sure how I enjoyed this game as a kid. Still, I'm eager to get back to it.
The game was developed by Natsume who is best known today for their Harvest Moon series, and has since grown into a large publisher. Dungeon Magic is their only foray into the realm of RPGs I can find. Creating a first-person action-RPG seems like an odd choice, and I can only guess they tried to capitalize on the notoriety and success of Dungeon Master.
The story in the manual supplements the three screen intro above (three screens that take two minutes to play). A long time ago, a great warrior, MAGI, defeated Darces with the help of six swords and magical armor. Darces was exiled instead of destroyed. Now, 500 years later, Darces has returned. Time to reclaim Magi's swords and defeat Darces for good (or banish him for another 500 years).
The game starts out in the middle of Granville. The character is a nameless warrior. One of many apparently drawn towards fame and riches, or maybe the good deed of ridding the land of evil...
With only the clothes on my back, not even a weapon to my name, I spoke to the townsfolk. Helpfully I was approached by an old man who gave me a compass. Now if only he left me a map as well. Others told me north of town is the castle Grades and the king would give me a sword.
At this point the game didn't really provide any leads. Someone mentioned the town of Deirus and a water spirit, but no one would tell me where that was. Luckily I have the manual, which suggested learning magic from the water wizard Sura (one of the five wizards in Granville), traveling to Deirus through Gran (different town from Granville), and visiting the Sanctuary of Selle with an elemental sword received from a spirit at Sara Spring. By the end of this post I'll have done all this, but getting all this information before even starting the game left me bewildered.
To get there I needed a map. This game requires a map. Either someone else's or your own, but I don't see any chance of getting through this without one. A map was included with the game, which lays out the general location and names of places, but a map on graph paper is the way to go.

I thought about deviating from the suggested path by choosing fairy magic, but I ended up going with water. If I remember correctly fairy magic has a lot of utility spells such as showing a grid based map of the area and displaying player and monster stats. Water magic is suggested for the defensive powers.
Only one type of magic can be selected, and once chosen, the other wizards will shun the character. The wizard apprenticed under is the one who will advance levels as the character gains experience. You'll notice the character starts at level 0; very strange to see this in a game. I wonder if there are any other games that don't start at level 1.

I'll dive more into magic once I experiment a bit more with it. Currently I'm using the spells suggested by the manual. One such spell was ||| ||| |||, described as a powerful shield that blocks most attacks. Magic costs HP instead of a separate pool of MP. So I found myself drained of 8 out of my meager 12. My powerful shield somehow failed to protect my flanks.
The majority of my time so far has been mapping the world properly. Most of the area is wide open with only a smattering of forest and ocean. Couple this with active monsters and we have a great recipe for getting lost.
I slowly built up my equipment and levels, and then ventured out only to find nearly the same starter equipment in scattered treasure chests. I found it strange just how much starting gear I found: boots, headbands, and gloves. My conclusion, I had stumbled upon the last resting places of failed adventurers. Why else would such pitiful gear be stowed away?

Putting those morbid thoughts aside, I made my way to Gran, which had very little to offer. Deirus to the west hinted of a demon guarding the water spirit. In reality, it was merely a scorpion monster I had faced many times already.
I noted early on the general lack of music while exploring. It is dead silent when standing still. If an enemy is close they'll make attacking noises, and walking has footsteps falling, but in general it's quiet. Then all of sudden, the music blasts when entering a shop, or gazing upon the water spirit. It's a bit jarring. All the tunes I've heard so far are nice (although I'm not the best judge), especially the intro music.
The spirit was really lonely, and she gave me a magic sword for visiting. I can't actually wield the sword, so it doesn't have much use other than as a plot item. People from town changed their dialogue afterwards. They now pointed me towards the Sanctuary of Selle where a strange sculpture was said to reside.
Before heading to Selle I decided to explore a little more and found a cave to the south of Deirus.  Well, let's just say I wasn't ready for that location yet. I quickly returned to Selle after exploring a nearby woods.
Selle was fairly simple. No big surprises. It's three levels deep, and while there are some generic maps in the manual, I made my own. At the very bottom was a sculpture. I couldn't make it out very well as I got hit by a darkness spell, but what I think were eyes glowed red followed by the new sword glowing blue.
I completed the exploration of Selle with quite a pull. It's sad to see so much equipment just laying about, but it's best use at the moment is to sell it. Back in Deirus someone new suggested a wizard at the town of Bell would take interest in the glowing sword. I guess I'm off to Bell next, so long as my game cart will allow me to play.
Luckily the most time consuming activity is mapping. In fact, during my exploration of Selle I let evil win again an hour in. It only took 10 minutes to get back to where I was. There aren't any random encounters; monsters are in fixed locations per map and don't respawn until the map is reloaded. I believe the maps reload only after staying at an inn. There's no save option; the game is saved every time I stay at an inn.
I'm still learning about the game. Little things like the longer I stay out, the weaker my character seems to get. Staying at an inn refreshes him, but also respawns monsters. Magic is going to take investigation, but I can't imagine attack spells ever being useful as they quickly drain HP. Defensive spells definitely have a noticeable benefit even if it's hard to tell what that is. Luckily the manual gives me the incantation for a physical shield and a magical shield.
I think I'll choose fairy magic as my next school of magic, and hope the information on my adventurer includes these values in addition to the adjustments from spells.