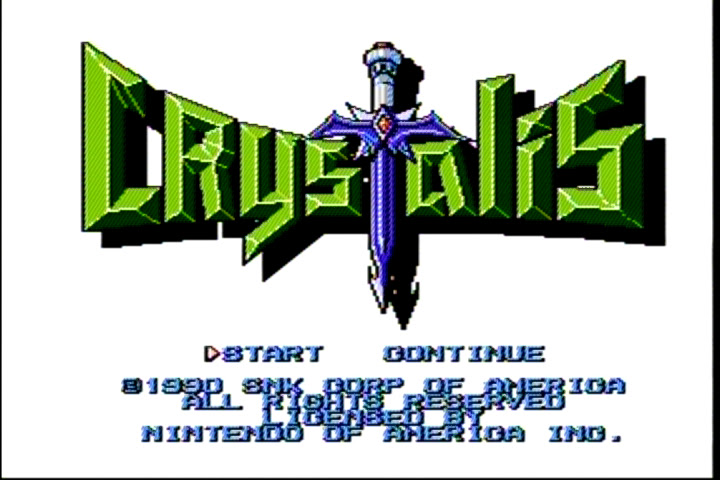 
October 1, 1997: The world ended this day. Survivors built a floating tower to oppress the evil which started the war. Life on the planet below mutated over the course of 100 years. Sorcery and magic were revived while science and technology fell from common knowledge.

A powerful magician named Draygon, tempted by the forbidden arts, began studying machines. The power to fly brought him to the floating tower where he now resides, spreading his evil influence.

Four swords, and other items paired with them, were created to combat the possibility of this evil returning. Based on four elements - wind, fire, water, and thunder - the swords could combine into a crystal sword once at full power: the sword Crystalis.

Draygon took the four swords from the four wise men and scattered them over the land since he was unable to destroy them. The wise men, following ancient texts, revived a mighty magician that was frozen during the Great War.
The process had wiped the magician's mind and scattered the four wise men. The quest ahead is clear (if you read the manual); find the four swords and learn all I can from the wise men. Finally, forge Crystalis and destroy Draygon's reign of terror.

I played this game over 20 years ago. Going through certain areas I have a hint of recollection for where to go, but I'm still exploring everywhere. The most memorable part of this game is needing a Nintendo Power hint when I was younger (something about a dolphin and/or a necklace).

The first thing that strikes me is the movement speed. It's very quick. The leisurely walking speed of The Legend of Zelda, Willow, and Super Hydlide allowed me time to position myself in front of enemies. Combined with an actively scrolling screen instead of static screens I've already run into my fair share of monsters, literally.
Right outside my cave is the town of Leaf. I don't have anything to my name: no armor, no gold to afford the armor or items in the shops, and no weapons to defend myself from the monsters to the north. An apprentice to the first wise man offers 100 gold to get me started, and the mayor handed over the Sword of Wind. (Draygon didn't really hide these very well.)
I bought some armor with the starting gold and headed north into the open plains. Inside a cave was the first wise man, Zebu. He told me the way forward required activating the windmill. The man who worked there was fast asleep though. Instead of taking the key I needed to find a way to wake him so he could give it to me.
I returned to town with no way to move forward and found a couple people had new dialogue. So, it's going to be one of those games. I learned the best way to wake someone up is with an alarm flute. It only took a few minutes to build up a level and my gold reserves. I took my shiny new flute to the sleeping man.

Starting the windmill opened a cave next to it, obviously my next destination. As I went inside, Zebu gave me the spell Refresh. I found the Ball of Wind, which gives the Sword of Wind power level two.
Swords can be powered up by holding the B button to charge them. The maximum level is 3 once the bracelet for each element is equipped. The second level power for wind knocks down rock walls, which was necessary to reach the boss. It was an easy battle, firing my projectiles as he teleported around the cave summoning bats. Near the end I couldn't time the shots as he moved about too quickly, so I flailed about wildly until I connected.
The boss left behind the Rabbit Boots, which allows my character to jump (it wasn't until Mt. Sabre when I figured out how to use them). On the other side of the cave was another open field. I found axe-throwers and blue mushrooms; the latter was impervious to my attacks.

To the north was the hut of the next wise man (not currently home). To the west was the city of Brynmaer. There was an icy mountain to the southwest, a poisonous forest to the east, and an area to the northeast blocked off by an invisible barrier.
The statue was claimed by someone in town. In exchange for returning it I received a gas mask that would allow me to enter the forest without fear of the poisonous air. I upgraded my equipment before heading out.
I remembered the forest being more maze-like, but it was much smaller than I recall. I easily found the town of Oak. Inside were intelligent animals that gave me the cold shoulder.
I checked the previous towns; nothing new. Time to see if that wise man is back. Tornel, the wise man, was there and required me to best his apprentice Stom in a sword fight. A direct approach failed miserably. I thought I wasn't leveled up enough, or I was missing a key item. Neither of those were true, and after exhausting other possibilities I returned and easily trounced him. The only difference I recall is I side stepped once or twice before mashing attack.
I headed back to the town of Oak with my new telepathy power, which grants the innate ability to speak with animals, and when activated it allows me to speak to one of the wise men (one looks like a woman though). One of the residents of Oak lost a boy the forest. I discovered him quickly and returned back to town. I received an insect flute, and the Flame Sword from the mayor.
The mayor gave me the sword on the condition that I deal with the threat of a giant insect. The insect flute summons the boss in an area that's obviously missing something (that black area is always present). I died once, but luckily I had just saved before heading out. On the second attempt I was a little less reckless.
The reward for this boss was the Ball of Fire. The second level power of the Fire Sword is a jet of fireballs that can melt ice. With the fire sword I'm now able to kill off the flying insects and other previously invulnerable monsters.

Posted by Zenic Reverie at 5:32 PM