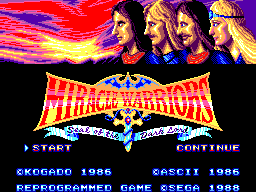 "Upon arriving at the castle gate I'm greeted by the king. Without wasting time to chat he tells me I'm the only one that can seal an evil force. My first step is to find the sage Kosama. I'm left to explore the harsh barren land. The town of Garia is nearby, and I realize how ill-equipped I am for this journey. Thankfully the surrounding area provides enough monsters to gain some funds, and one of the villagers tells me Kosama lives elsewhere. Across the land I travel. Crossing many bridges I finally find Kosama, only to be told that I will require the assistance of three companions. The first is said to be in a town where they worship the sea."
Barring the prior consoles, which I have yet to fully explore, Miracles Warriors may very well be the first console RPG. I'm having to play it through emulation due to not having an SMS, and no recent releases of the game. I think it's worked out fairly well so far, except for some lag issues every now and then. If anyone knows where I can purchase this game for a current console, let me know and I'll get it. It's been a good bit of fun so far.

I started out by naming my warrior Qycx, and found myself outside of a castle. The king here explains it's my fate to stop an unnamed evil. It seems some seal of a dark lord may be breaking, broken, or threatened in some way. Also, I should seek out a sage named Kosama to learn more.
With no real direction, I have to search the surrounding area. Soon I get into my first combat and see my HP or what I assume is my HP, diminish quickly. In the next battle, I die. I hadn't even located the first town, and I can already tell this game is going to be a grind. Eventually, I get the right combination of enemies and number of encounters that I reach the first town with enough money to heal myself.
The game actually has two forms of currency, Guilders and Fangs. Some enemies (mostly beasts) will give only Fangs, which are exchanged for Guilders or used to fulfill quests. In addition to that there's a stat called fame that increases slightly with each evil enemy defeated, and reduced if good characters are killed. The best way to handle these good encounters is to talk to them (which gives some hints) or retreating, which appears to be automatic. A high fame is necessary for some townspeople to speak with the party.
The balance of enemy difficulty and reward is a little skewed. Thieves and Evil Merchants are equally easy and give 300 and 2,000 Guilders respectively (some of the best pay out); however, a more difficult Zirod gives 4 Fangs, which is only worth 200 Guilders. Later on the best enemy I've found is the Great Lion, which gives 6 Fangs and 3,000 Guilders.

I spent the first few hours saving up enough to afford the knife, armor, and shield in the first town only to realize that equipment has durability. My knife had broken beyond repair, so I saved up for another. In the second town--after having to deal with repairing my equipment after each venture out--I found the blacksmith required 12,000 Guilders, but this paid for him to follow me around and continuously repair my equipment. It strikes me as odd that the game would throw out a feature like this so early, but I'm glad to be rid of it.


In my wanderings I came across the small village where Kosama stays. He immediately informed me that I need to find three companions born of an "ancient lineage" and also destined to seal the dark lord. He said the first companion would be in a town that worshiped by the god of the sea. At this time, three more spaces for the companions appeared on the display.
Finding the village was easy enough, but when I spoke the phrase necessary to recruit him, the game informed me I needed something more. At the time I had been keeping to the plains, as I was warned against--and experienced firsthand--the dangers of the forests and mountains. Hidden in one of these forests was a castle that provided me the item necessary to get my second companion, which I wouldn't find until I started mapping the land.

To help with traveling there are feathers that teleport me back to a town that sells feathers. Unfortunately, the only two towns I've found that sell them are on opposite ends of the map, no help when traveling to the middle. Healing is possible while exploring by using herbs. It's a little confusing at first, but you can purchase them in packs of 5 up to 24. I have to have exactly 19 to get 24, having 20 will give the message that he can't sell me anymore.
Stocking up on healing items and feathers just in case, I explored a monument where I found a helm that helps me read messages in caves. The only message I found wasn't very helpful. There was a mask I purchased, which apparently helps me in caves, but I'm not sure how. I also ventured into the forests and mountains as the only other place left unexplored. This is where I found a castle with a king that game me an axe. With axe in hand I could now recruit the second companion, Guy.
With Guy, I went to another castle and traded 300 Fangs for a sword. Apparently, these are weapons of legend, which unlock certain story elements. I'd saved up quite a nest egg of Guilders while randomly traveling, but even so, it wasn't quite enough to upgrade both weapons at the weapon masters' village. It costs 60,000 to upgrade a weapon.

Upgrading Guy's weapon gave it some kind of mystical power to chop through a skeleton blocking my way to the south. Here, on this small lot of land, I found a small village that wants to sell me a ship, for 30,000 Guilders. Time to grind once again.
To explain the display, the $ is Guilders, the pouch is herbs, the tooth or horn are fangs, and the C is character or fame (currently positive 4,020, yes it's possible to go negative).

Combat becomes somewhat tactical, as the only character that the enemy hits is the one that takes an action. That is, unless the enemy casts magic. I've yet to get any combat spells for my party, but I believe one of my companions will eventually learn some. It's possible to retreat from combat, but if it fails, then each member takes a hit from the enemy.

It's been a little slow going because I haven't found a copy of the manual online. While searching for it recently to see if I missed any resources, I found that the original game came with a cloth map. I've already started on my own MS paint map, which I'll post once it's finished, but below is what the cloth map looked like.