The Legend of Zelda was a seminal title for the NES, so it's no surprise that its sequel sold very well. Zelda II: The Adventure of Link was released around December 1, 1988 according to Wikipedia. Development was once again led by Shigeru Miyamoto, but the bulk of the team was changed up. Takashi Tezuka also comes back to lend a hand in creating the story. 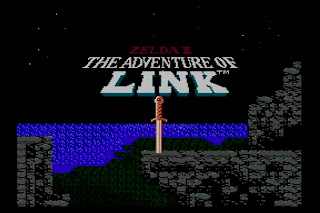 Link from the original game, now sixteen, discovers a mark on the back of his hand in the shape of the Triforce. He visits Impa, and she begins to tell him a story long forgotten. The Trifoce was once owned by a good king. On his death, it was split into three pieces. His son the prince received one, and the other two disappeared. A magician close to the king suggested to the prince (who was searching for the other pieces) that the princess received one. After confronting her, the magician cast a spell that put her into an eternal sleep where she didn't age, but the power of the spell killed the magician. Fraught with guilt, the prince decreed that all females of royal blood shall forever be named Zelda (this is the Legend of Zelda). Hoping one day his sister would wake, he locked her away on a comfy bed.

Six gems and a scroll are given to Link, and although he's never seen the strange writing, he's able to read it. Long ago, the Triforce was broken into Power, Wisdom, and Courage. The first two we saw in the first Zelda, but the last one is necessary to release the full power. Using this power should awaken the sleeping princess. The crest on Link's hand indicates he is the only person able to handle the Triforce of Courage. The scroll details it is hidden in the Great Palace, but to prevent it from falling into the wrong hands there is a binding force that is broken by placing a gem in each of six statues in the palaces around Hyrule. There are guardians to overcome, put there to protect the statues from enemies of the realm.

We also learn that even after the defeat of Ganon his minions are still causing havoc and chaos in the land. Link's blood is the key to resurrecting their leader Volde... I mean Ganon, so if Link loses all his lives, then Ganon is resurrected once more.
Zelda II is a departure from the purely top down experience of the first. While the overland view remains this way, random monsters, caves, towns, and castles have Link exploring a side-scrolling adventure. In addition to heart containers, and now magic containers, Link will gain experience points for killing monsters and completing castles.

This level system is unique to this game and the series. With this pool of experience points you can choose to increase attack power, reduce magic cost, or add defense; attributes level individually with each one having a different experience point requirement. It's possible to customize Link in different ways if you choose to save for the most expensive level (usually attack power).

Even with good sales, many fans view it as the black sheep of the series. This reaction seems very similar to the one received by Castlevania II. It's a careful juggling act to follow a hit game; developers need to keep what makes it great, fix things that didn't work, and add new aspects that build on what did.
There's a debate over the Zelda games, with some counting them as RPGs, and others discounting them from the genre. Even though these claims persist, the most RPG-like of the series is often shunned. Even with dropping the experience system many aspects became staples for the series: magic, NPCs, and a detailed story. I don't expect to put this argument to rest, that's really not my goal, but I do fall on to the side that claim these are not true RPGs.

I believe the debate continues because having a game or series called an RPG has become some sort of prestige classification. Like a badge of honor, nearly every game scrambles to include inventories, experience points, and leveling, as well as storylines, exploration, and dialogue. Personally, I see parallels between claims that "games are art," and "my favorite game/series is an RPG." It dilutes the classification, and makes it meaningless when more outliers are added into a definition.

In my quick check on the RPG scale, Zelda II got 11, but that's from a fuzzy memory, so we'll see how it stands up in the end. I have beaten this game on multiple occasions when I was younger, but it's been at least 20 years since I last played it. Let's see how much I remember, and maybe I can get through it in a couple of play sessions.
Posted by Zenic Reverie at 8:51 PM