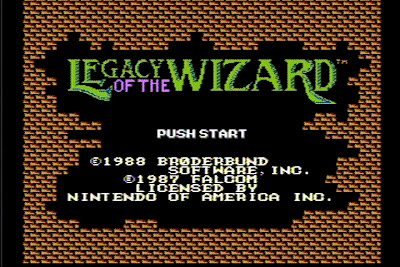 This is the first game on the list that I need to cut where I've actually played it. I have fond memories of playing this game, and like many games during this time, my brother and I played through it together and finally beat it. I've never played through it myself from start to finish, and remember often getting lost because the map is huge. With secret passages, items necessary for some paths, and multiple characters that have strengths and weaknesses, this was an epic game for me.

Some part of me was hoping to include this, but even from what I remembered I knew it has more action and less RPG. My memory proved correct as I found no character levels, only static combat, and no selling. I was surprised to find no mention of the story throughout the game, another black mark. The biggest plus is the open expansive dungeon, I mean the number of screens is outstanding for an NES game. I'm sure there are bigger maps out there, but one this varied and detailed was rare to see for me.
Posted by Zenic Reverie at 10:53 PM