"We've come from the four corners of the world, each holding an orb, arriving at a time and place we're needed most. The world is in turmoil... the earth rots, the wind has ceased to move, fire spontaneously consumes, and the waters rage at all who dare traverse. Yet, somehow we've arrived on this distant plain seeking our destiny, drawn forward by the orbs."
Final Fantasy is the biggest name in console RPGs in the U.S. While not always well received, the franchise spans movies, music, and toys. In Japan, it's rivaled by Dragon Quest, and though Dragon Warrior was released first, it didn't catch on as well in the U.S. as Final Fantasy did.
The first game begins by giving a short back story of four prophesied warriors of light that would bear four orbs. These orbs once glowed with the light of each element (earth, fire, water, wind), but have dimmed over the past 2000 years. The world is troubled by unrest due to the existence of the four fiends. My quest, to destroy each fiend and return light to the corresponding orb. 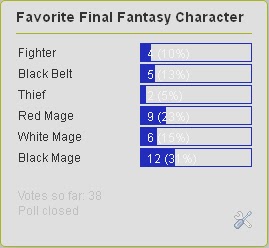 For the past few months I had a poll up, which I used to determine my starting party. Taking the total votes and dividing by four, I came up with the total votes needed for each character. Since none had double that amount, I just picked the top four: Red Mage (Gioz), Black Belt (Tont), White Mage (Pipi), Black Mage (Kili).
The party starts outside Corneria. In town and at the castle, they learn the princess was kidnapped by someone named Garland. As warriors of light, we take the quest and dispatch Garland. Rescued, the princess bestows a Lute upon the adventurers. This Lute has been a royal treasure for thousands of years, it must be worth something. The king, in honor of his daughter's rescuers, orders the north bridge rebuilt. Here the journey begins.
From here, the game continues on a linear path of moving on to the next town or dungeon for no other reason than all other ways are blocked. There's not a lot of direction, no indication where the fiends are located, and purchasing items are kind of it and miss with no way to tell who can use what equipment. That is, if it weren't for the manual, I'd be completely lost. The manual acts as a guide, describing suggested equipment, spells, and providing maps of the surrounding areas. In fact, it walks through the first two fiends, up to the airship and class change.
The game was also originally packaged with maps of some of the dungeons, and a table of weapons, armor, and magic. Nearly everything was described in a similar way modern games would describe them inside the game. I'm not sure how far I'd want to take all this advice and where to draw the line between walkthrough and helpful hints. For now I've mainly been using it for equipment and spells, while I've done my own exploring without the use of maps.
I've managed to get a ship from some pirates, and am now on a quest to rouse a sleeping elf prince, return a crystal eye, and find a crown deep in a marsh cave. I've had to grind quite a bit to even make small progress. I often find I'm quickly outmatched by many encounters that can paralyze, poison, and stone. I've gotten used to targeting during fights, and having ineffective attacks if the target enemy dies before I'm able to attack with some of my characters. In a sense, it adds to the strategy that I need to remain thoughtful of who is attacking what enemy and if I can get away with splitting my attack or if it's best to focus.