Combatant - As an action based, and completely removed from stat based combat, it's no surprise the rating here is low. While combat was challenging throughout the game, there's little benefit to fighting. Most ship spoils weren't worth the fuel expense for firing weapons (variable for each weapon) and running shields. So, don't play this game for the privateer one-man (ship) army feeling.
Rating: 3

Admirer - What guys? The crew was ancillary window dressing; set 'em and forget 'em for the most part. While each position had its own menu of options, it felt more like one ship's options. There's very little to customize, and maxing out stats was trivial. Ship control was decent, but entering orbit was too difficult. Names were about the only option for personalization.
Rating: 2
Puzzler - Figuring out where to go and what to do was fairly straightforward. It's easy to get lost though, and finding the one bit of dialogue throughout all the races grew tiresome. I felt engaged enough to continue discovering solutions to problems. I'm going to assume I missed bits of the game as the trail from one point in the story to the next was often missing, but I enjoyed the multiple ways at arriving at the end. Maybe I was meant to explore entire planets blindly.
Rating: 5

Instigator - The story is where the game really shines. It's slow to develop, but the depth of history and lore packed into the game is astonishing. Figuring out how to speak to each alien and what questions would lead to good information provided good feedback. My only complaint was the looping dialogue through the whole script rather than highlighting key information. Player actions actually meant something with a kind of faction based loyalty (e.g. fight the Elowan, and the Thrynn were suddenly friendlier).
Rating: 7
Collector - There's an assortment of weapons, TV upgrades, and artifacts, but no real sense of collection. It's difficult to judge one weapon's strength against another, and I only hoped the higher fuel cost meant more damage. At least cargo space was plentiful, so I never had to forgo any unique item. The variety was nice, and I eagerly checked each artifact as I picked it up.
Rating: 3

Explorer - The galaxy felt well populated while not overly crowded. The music and sound was a bit off-putting, and would sometimes drop until the next scene change. Star systems are populated with worlds filled with ancient ruins, mountainous valleys to mine, and an artifact if you're lucky. Some planets bear life that can be collected, cataloged (manually), and sold. Finding colonies for Arth kept me hopping from one planet to the next. The best part about the game is that everything is open, from beginning to end.
Rating: 7
Final Rating: 25 [42%]

In addition to my own experience with the console game, I invite you to check out CRPG Addict who played through the DOS version. There are some differences, and I always find it interesting to compare. I'll stop by there and comment soon.

I've already been playing through Might and Magic: Gates to Another World (the II is dropped on console), but I should be able to get a post out before I'm done. I still hold out hope I can catch up my blog posts to my play state. Maybe this is the weekend.

This is my first Might and Magic game, and I've been a bit overwhelmed by it so far. In some ways the difficult even rivals Wizardry, but at least it's possible to save the game. Still, it's a lot fun, and I'm finally feel like I'm making progress. Strap yourselves in because this is a long one. 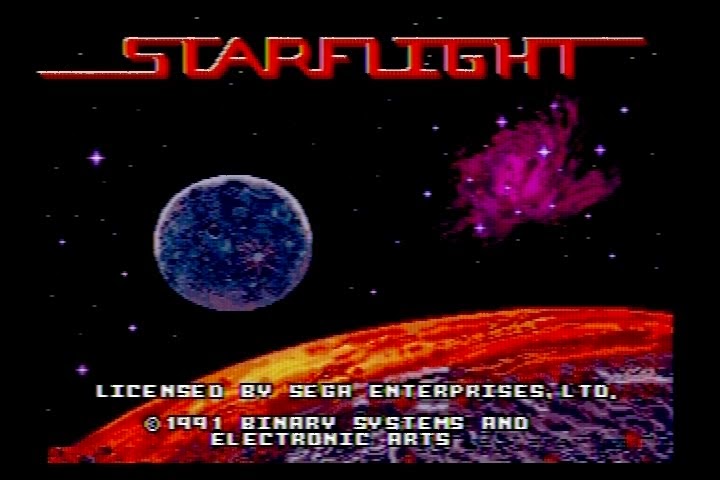 So, in the end, not really an RPG, but on the surface it can easily be confused as one. The adventure aspects are good, but the dead ends are a drag (not unheard of for the time though). I had fun. Time for the rating.
Combatant - This was a joke. It's like someone heard what RPG combat was and implemented it without having played one. There's no challenge, and it only serves to make the game more linear. It's passable for the style of game, but could have been so much more.
Rating: 2

Admirer - The party is always set, except their names I suppose. It's interesting that each have their own phrases when attempting different actions; too bad switching is so cumbersome. I would have used it more if it were say the select button rather than an icon.
Rating: 2

Puzzler - Most of the puzzles were great. It's obvious in some cases that some traps will require a reset, but there were an equal amount that don't really warn against taking certain actions. Overall it's paced well, and there are multiple puzzles to seek out while mulling over others. The addition of the voice of hints ensured I wasn't completely stuck. Because this isn't an RPG though, this category suffered from a lack of side quests and multiple solutions.
Rating: 4
Instigator - The story is farfetched, but it's consistent with its description of the items, demons, and various locations. I have trouble suspending my disbelief when a story draws so much from reality, but then adds things like time travel and shapeshifting demons. There's nothing to influence or change on subsequent playthroughs, but it's a short enough game that I might pick it up to enjoy a second or third time down the road.
Rating: 5

Collector - Items yes, but not the collectable kind. Most items are used up and never seen again. I like the use of weapons with item enhancing jewels, but I wish there was a bit more to do with the full inventory. There's no economy at all.
Rating: 3

Explorer - There's not a lot to see. Music is nice and subtle, and graphics indoors are nice, but the world connecting each place is bland and uninteresting. Entrances to each location aren't always obvious, so unless you had the map it'd take a while to figure out how to enter the pool of water or the secret path to the hinting voice.
Rating: 3
Final Rating: 19 [32%]

This was a nice little side game, but it's time to get on with a real RPG. Actually, Starflight is next, which is another debatable game. In fact I almost didn't include it, but outside of limited character advancement and combat not really fitting an RPG there's a deep economy, expansive story, and a "world" large enough to rival nearly any other game I've played to this point. Let's see how it holds up in the end.
Posted by Zenic Reverie at 1:04 PM No comments: