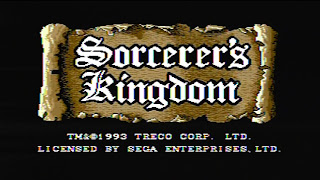 Elapsed Time: 7h26m (Final Time: 7h26m)
Combatant - Combat is fairly straightforward with very little challenge overall. Having said that, it is easy to overextend in the first few areas when it's just the hero. Stats play a big role in battle, and reduce the penalties of higher tier equipment. Unfortunately grinding stat increases isn't feasible for all characters, and I didn't quite see the potential of Midi as a fighter. The enemies themselves have two modes: melee fighters or offensive magic-users. There's little strategy in fighting other than bashing their faces in, and maneuvering the more squishy party members away from melee range.
Rating: 5
Admirer - There's no customization, although like most stat based grinding games, I suppose it's possible to spec out Astina as a fighter. Everyone has powerful weapons, but most of the mid to late range weapons prevent magic use in combat. Appearance of the characters don't change with equipment, but that's rarer than I thought was the case when I started these ratings. There aren't any advancement options per se, only a single path. Character control is intuitive, and focusing on a single character's development is easily accomplished.
Rating: 3
Puzzler - There's never a chance of losing sight of the main quest. From the obvious sword placed on the map when an adventure is completed to the NPCs in town helpfully pointing out what needs doing next, especially the bartender, there's no losing your way. No side quests, no puzzles, and only a single solution to the problems the game presents bring this rating down a bit.
Rating: 3
Instigator - It's a simple premise. Go off to follow in your father's footsteps fighting evil. Find some orphaned elemental spirits. Draw on their power to defeat a black dragon bent on regaining its power to terrorize the land once again. The world is detailed, and the changing NPC dialogue as the story goes gives a good sense of progression. In a small game world like this it works well, but I have reservations about such a system when it gets too large. Having to go back to each character to possibly get new information seems like a chore that's better handled in other games by introducing a new town.
Rating: 6
Collector - There are a good number of items, mainly equipment, but there's too much to fit in all the inventory slots of four characters. Without a vault I was forced to sell some of it off, though it didn't have much use beyond equipping, even the magic items. The economy does well to maintain its usefulness through to the penultimate dungeon where better equipment is found in the dungeon than is purchasable. The strength of each item is readily available, although there are hints of magical effects that remain a bit of a mystery. With no indication of a complete list , the treasure seeker will have to be ever vigilant for secret passages.
Rating: 4
Explorer - Compared to most games of the era, the world is small. There are no more than two screen transitions between areas of interest. The graphics are well made, with enemies doing well to standout from the background. It's the normal high fantasy fair with goblins, wolves, and golems, as well as wizards, lizardmen, and skeletons. There are a few palette swaps, but most are unique sprites. The dungeons are simple, but not bland. The sound and music is a bit forgettable. There aren't any Easter eggs, at least that I found, although secret areas do exist in the dungeons. While past areas don't become boarded off, the world doesn't open up until the current quest is completed.
Rating: 4

Final Rating: 25 [42%]
Overall it's a fun little diversion. It doesn't hold a candle to other deeper experiences like Phantasy Star or Warsong, but it is also short enough to fit into a weekend. I wonder what I'll remember of it down the road. Probably that it was easy, had an interesting battle system, and miles ahead of similar games like Traysia. Though, I don't really recommend it today. It doesn't do enough new that hasn't been done better before.
Up next we have another Dungeon Master game, Theron's Quest for the TG-CD. Not quite a port of the first game, it seems to be a bit of remixed version, but we'll see how much it really differs next time. Posts are still going to be off the regular weekly schedule (since when has that happened?) through the rest of summer probably, but I hope the delays don't trouble anyone too much. After Theron's Quest, what I'm really looking forward to is Shining Force. A series of games I've heard only good things about, but never really played for myself.
Posted by Zenic Reverie at 8:26 PM