While the ending scenarios were dramatic, compared to the scenarios 11 and 12, they were a cake-walk. I took them slowly, gained all the experience I could, and enjoyed the ending that followed. However, at least in scenarios 18 and 19, the party started right next to the boss with only a wall to separate them. With all the magic I had, including earthquake to knock down walls, I'm fairly sure those two maps would take less than 10 minutes.
Stage 17 required total defeat, so I armed archers to tackle the flying units. I held my ground on the hills near the bottom of the map, and let them come to me. The enemy commanding units had a couple of fireballs in reserve, which made placement troublesome. For the ground units I set aside some horsemen.
Garett and companions entered Seneferia to face off against the last three generals of evil. Naxos controlled the gateway in stage 18 with groups of monsters: slimes, skeletons, ants, and golems. The new golems had defense so high that magic was nearly the only way to damage them. I decided to have Mina go with guardsmen instead of monks because there were more slimes to grind on. For the skeletons, I did my best by throwing horsemen at them. Had I a dragon knight, I could easily have flown over the walls and completed the map on the second turn.
I noticed Lance was no longer available on the next map for some reason. I tried out my strategy with Lance on the previous map, just to see if it was possible. I equipped Warsong and he easily took Naxos out in a single round. Having Lance on the map triggered some additional dialogue where he volunteered to stay behind to cover our backs. I'm really missing Sabra's dragon knight class.
Instead of taking the easy way out in scenario 19 I made my way around the sides, taking out all the enemy commanders in my path. Mortimus had a confusion spell that turned my forces against me, but only in the immediate areas around the spell target, which always seemed to be a commander. Knowing this, I spread my units out, and rendered that spell useless. Mina's monks took out the skeletons easily.
The final stage was filled with skeletons. Monks are the only units strong against them, but Mina was the only one with that option. I went with mostly horsemen, and a couple detachments of archers. I'm glad I did because a hidden final boss, a bit obvious with only seven enemy generals shown on the map in the beginning, was all flying units. The main commander on map was Ganelon, the magic knight who originally used evil to conquer the land.
Once Ganelon fell, Chaos appeared. His defeat was always the end goal for the map, so I guess the scenario overview really spoiled his appearance. Chaos and his units flew across the map, so I was glad to have chosen a couple contingents of archers. I also reserved a bit of magic for the final fight, and it proved very useful. Without a single commander loss I defeated Chaos in a single turn of magic, and a final charge. Good thing too, as nearly everyone was out of magic by that point.
And so, Garett and team bask in victory over the incarnation of Chaos. However, Chaos wasn't completely defeated, and claimed he'd return one day. As explained by him, Chaos existed to keep the world in balance against an encroaching Order. A Light exists that sustains life and pushed evolution forward. This evolution has caused the destruction of the world through war, and once it reaches its peak again, Chaos will return.
The game wrapped up with a summary of each commander. Bayard became captain of the guard, taking over Baldarov's old position. Calais returned as the court magician, and was studying the ancient scrolls of the magic knight. Thorne left on his own, and Carleon returned home. Tiberon went back to sailing, and Sabra also left to hone her skills. Garett took Mina as his queen, and sealed Warsong once again. Lance's body was never found.
With that, we have another game behind us. I can't fault it much for its simplicity, but I wasn't wowed. I enjoyed making my through it, but I'm eager to move on. I don't think I'd suggest Warsong to anyone other than strategy fans. It's a good length, and provides a challenge on most maps: charging in was rarely a viable strategy.

Combatant - Combat was challenging, and leveling up comes often. The balance of one action per turn makes unit placement key to winning. Taking advantage of magic spells was difficult.
Rating: 6

Admirer - There are advancement paths, and choosing the wrong one locks out other classes. Gaining experience only from the total defeat of enemy units kept Mina at low levels. If anyone has ever been able to get her Ranger, you've accomplished quite the challenge.
Rating: 5

Puzzler - Points for having clear goals. Strategy games are most likely going to fall very short in this category.
Rating: 2
Instigator - Permadeath was interesting, but I don't like how it locks out the story for those characters. Instead, losing a character just means no summary at the end. I believe the main narrative may suffer from translation issues, but it's good enough to keep things going.
Rating: 3

Collector - I included the point system for buying units as part of an economy. There are items, but they're automatically collected at the end of each map.
Rating: 2

Explorer - The music was nice, one of the best on the Genesis I've heard. It would have been nice to have some interesting spots on the map to explore, but there are only enemies, nothing else to find.
Rating: 2

Now, on to Faria, but first, I need to cut out Times of Lore, a game I enjoyed when I was a kid even though I really didn't understand what I needed to do. I thought about including it anyway, but even with its story and branching dialogue, there isn't any character development.
Posted by Zenic Reverie at 7:59 PM 7 comments:

Email ThisBlogThis!Share to TwitterShare to FacebookShare to Pinterest
Labels: Warsong 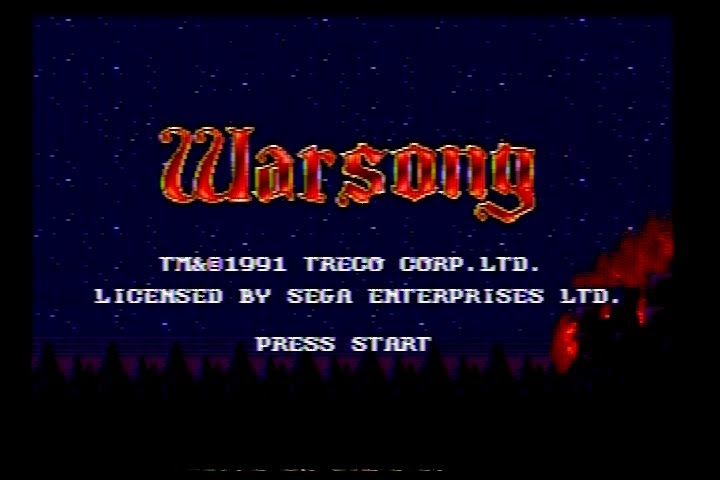 Combatant
Combat is quick and especially deadly for the unprepared. There are a wide range of combat spells, but many of them are too inefficient. In addition to damage, spells have an elemental attribute, which all have corresponding shield spells. The player and enemies have equal access to these shields, and learning what enemy weaknesses are is where much of the strategy develops. There many utility spells as well that are helpful for dodging. A variety of enemies keep play fresh throughout the levels. Unfortunately combat is mostly superfluous as enemies rarely are an obstacle to overcome and many times fail to provide a reward for the risk involved.
Rating: 4
Admirer
The most memorable part of the game is entering the spells by selecting different runic combinations. It's possible to fill in the spell book with all spells by the end of the first level. Paul gains additional mana by completing various quests objectives. This is the only progression in the game. Paul's appearance never changes, and there aren't any options for advancing his skills. Overall control of Paul is good; however, gauging jumps and turning left or right when exiting a building are troublesome.
Rating: 4
Puzzler
While the main quest boils down to "go right," there are plenty of obstacles to overcome. Searching every oddity is necessary, and progressing without doing so can result in an unwinnable situation. I'm reluctant to name anything a side quest in this game since discovering and solving everything is necessary for the complete ending. Most puzzles fit well with the world, although the puzzle rooms are a bit misplaced. The puzzle rooms don't offer any risk, but the rewards for getting through them are always beneficial. In the end, there's only one way to win completely though, and only one way to accomplish that task.
Rating: 4
Instigator
Poor Paul. Overlooked during the elimination of all wizards it falls on his inexperienced shoulders to defeat the evil wizard Abadon, who was capable of defeating all other wizards. That sounds plausible. There are plenty of descriptions for the various locations, and NPCs are helpful by providing random spells just when Paul needs them. The player's actions don't change the world, and instead feel like excuses to raise his experience (mana) once again.
Rating: 4
Collector
There are plenty of hidden items, and no limit to Paul's inventory. Gold is necessary, and since it doesn't drop from enemies very often, having a good supply is beneficial during the early game. Late game? It's absolutely useless; there's no where to spend it. I learned that nothing carries over when playing through to the next loop, which makes hoarding gold and items useless. There's little way of knowing if all items have been found unless you check them off from the manual. Finding the items that allow free use of spells is key to getting through the game successfully.
Rating: 4

Explorer
This is one of the best NES musical scores I've heard. It really enhances the atmosphere. The sprite work is unique; it hardly feels like an NES game. It's interesting to see the progression from level to level as a bright promising journey turns into a seriously dark environment. Unfortunately there aren't any unique features to see in the environment. There's nothing awe inspiring; everything flows well, but no one thing is really outstanding. Exploration of the environment is closed within each level, which does give a sense of urgency to move forward, but doesn't allow full enjoyment of the world. Not that Paul could really live off the current food supply.
Rating: 4
Final Rating: 24 [40%]

This game has a special place in my heart. It was one of my last experiences with the NES as we bought SNES later that year, and I quickly became engrossed in the newer console. I did play some later NES titles by renting them, but I believe this was one of the last we purchased. While each individual category above is slightly below average (due to the scores skewing towards turn-based RPGs), I feel this game provides a complete experience for any player.
I'm not sure this scoring method is really going anywhere. It could still be too early to tell, but for now I'm going to downscale this effort. This is going to my last post highlighting the scoring in such detail. From now on I'm going to include it in a brief overview at the end of the last game post. These posts usually take an extra day away from playing the next game, and was one of the contributing factors to the hiatus this blog went into. These posts are some of the least commented, and least viewed, so it's time to let them go. As always feedback is welcomed.

The month off has been good, but I'm very eager to getting back into it. For those curious what I've been doing to fill my time, I've been participating in a semi-annual mystery game tournament (finals this Saturday), and idling in the chat of a streamer that goes by the name TheMexicanRunner. He's on an adventure to play through every licensed NES game released with an English language version. Something that he calls NES Mania (www.nesmania.net). He just completed his first 100 games, which are picked by the viewers. Wish him luck in his effort.

Next up is Warsong starting very soon after this is posted. This'll be the first SRPG for the blog, so I hope it's well received.
Posted by Zenic Reverie at 8:52 PM 6 comments: