Combatant - There's little challenge to the combat aside from avoiding cheap tricks like instant kill poison and level draining. The AI is incompetent. The enemies rarely feel different. Stats do seem to matter, but it feels unbalanced. Rewards are heavily dependent on random treasure with gold and gems providing the majority of experience. Many rules are poorly implemented, or completely absent, making this a very poor port.
Rating: 5
Admirer - Combat icons aren't selected, unlike the PC version. Abilities do advance, and magic-users get to select spells, but there are only a limited number of useful ones. Controls in combat are slow. The same drab color palette is used throughout the game.
Rating: 3

Puzzler - The clerk acts as a good source for the main quest and side quests without any kind of dividing line between them. There are a few puzzle elements, but it's rather light. The rewards are really good, and I was awarded experience every time I cleared just a single band of undead in the graveyard. There are multiple ways to handle many of the scenarios, some of which avoid combat altogether.
Rating: 6
Instigator - While light on narrative, there is a story behind most of the activities in the game. I'm sure if I hadn't taken out all the different bands that could have joined Tyranthraxus, then I would have faced them inside the castle. The taverns act as a hub for hints, and the dragon Diogenes directs the party towards the next appropriate task. There are many options to influence the main or side stories that take place.
Rating: 5
Collector - There are a lot of different items available in the game. Unfortunately, inventory space is terribly limited. I would often toss out potions and other situational items to drag back magical equipment. The economy is very tight in the first hour, and then it's obscenely irrelevant. I had over 200,000 gold and 1,000 gems by the end of the game. There's no weight or encumbrance, and ranged ammo is unlimited, a couple of welcomed changes.
Rating: 4
Explorer - The over world map is the most interesting part, but the locations are well hidden. The music is better than the graphics, but that's not saying much. At least exploration is wide open from the beginning of the game.
Rating: 4

Final Rating: 27 [45%]
Overall a very disappointing experience, although that's due mainly to my time with the original game. I enjoyed reliving the story and build-up from normal gear to fully decked out magical weapons and armor. What I missed was the full experience I remember from my childhood. If you're going to play any version, definitely find a way to play it closer to the original. While Curse is out, Hillsfar does back an appearance on the list. I wonder if these passwords would work there.

Speaking of childhood experiences, I'll cut The Legend of Zelda: A Link to the Past next, and then play through Arcana. Both took up a good portion of my childhood play time. I'm not sure why I played Arcana so often, but something about the card based characters endeared the game to me. Link once again doesn't quite live up to what I consider an RPG, and I'll explore that once more. Arcana on the other hand, while simplistic, does meet at least the character development and combat criteria.

Email ThisBlogThis!Share to TwitterShare to FacebookShare to Pinterest
Labels: Pool of Radiance, Rating

Game #53: Pool of Radiance (NES) - Keeping My Head Above Water

Email ThisBlogThis!Share to TwitterShare to FacebookShare to Pinterest
Labels: Pool of Radiance 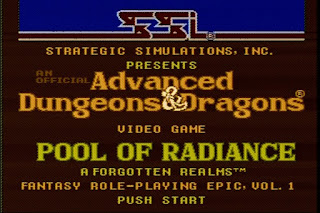