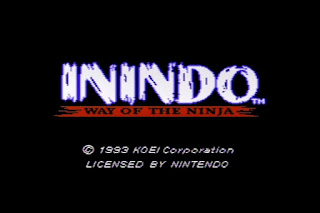 A combination of life, mood, and the game at hand has caused me to delay this post for far too long. Life is good, but busy. Due to that I really haven't been in the mood to play games, especially this one. It's one of those bland trials, not good, not bad. If I had to sum up this game in a single word: uninspired. Running around as a ninja seeking revenge on an evil warlord sounds like a promising concept on paper, but the implementation is lackluster. Combat is slow, navigating menus is like wading through molasses, and other little things irk me like healing magic randomly failing.
The hero, who I named Kojiro, was the youngest member of the Iga ninja clan, and as such was sent away for his protection as Nobunaga's forces invaded. Secreted away to a small village, he trained under the tutelage of the elder and his granddaughter Rei. A year later, his training was cut short as Nobunaga's forces appeared at the gate. Outclassed, the hero was struck down. Before the finishing blow could be delivered reports of an attack on Nobunaga forced them to withdraw. The village elder healed Kojiro, and sent him off to the nearby dungeon to retrieve the super secret password to unlock further training dungeons.
All the villagers, including Rei, dispersed in the attack. After the dungeon, where I picked up the password, I was treated to a scene where I saw Nobunaga, injured yet alive, walking by with his army. This is where the game departs from history, as Nobunaga was actually assassinated at Honnou-ji temple. The events that unfold take place in a fantastical account with sorcerers, ninja spells, and a 20 year time limit to complete the game (hooray for arbitrary time limits). Days pass while walking around the overworld map, and a single day is spent when lodging at an inn or entering a dungeon. Every month an entire map of Japan is shown, and territory updates are given to show who's invading which region.
Towns offer any number of weapon shops to purchase gear, guilds for selling equipment, medicinal shops to heal and buy recovery items, tea shops to hear about local gossip, fortune tellers to learn about potential party members, and inns to save and recruit. Castles also have some some options that I'll cover later when they become relevant. Until level 7, the game doesn't allow the player to recruit additional party members. Castle jobs are likewise locked until level 15. With little idea of how the game worked, I took a leap and sold off my early gear to purchase a then powerful ninjato leaving me with 0 gold.
My next dungeon was said to be at Mt. Fuji, but not having a good grasp of geography I headed west. I was turned away at a border checkpoint at Nobunaga's territory. East it is! Having spent all my gold I found I couldn't rest at inns. The game requires consistent rest, or it forces the party to make camp in the wilderness, wasting a day. Doing so increases the possibility of bandits waylaying the party. These bandits are rarely worth the trouble. Overworld encounters are luckily rare since they offer meager amounts of gold and experience compared to dungeon battles. At least the better gear helped me survive the two battles I came across before reaching Mt. Fuji.
At Mt. Fuji I delved into the dungeon alone to retrieve the fire gem. It was difficult due to one enemy that could use magic, and he'd use it every turn. Damaging spells appear to do a set amount of damage, and equipment with magical resistance is limited. There is an injury system where a character doesn't necessarily die after taking lethal damage unless they're injured. Think of it as 1 extra hit after max HP. With the help of a few elixirs I emerged with the gem to learn the flame ninjutsu.

Due to the difficulty I anticipated needing a full party, so I spent some time grinding up to level 7. To recruit characters they first have to be located as they travel from town to town. Some months they remain stationary, but most appear and disappear from day to day. Each one has a friendliness value that fills up after talking to them, which costs a day of in-game time. It took a good month to get a healer to join, and I lucked into a ninja that showed up already interested in joining me.
Combat was moderately easier with three party members. I made my way through the earth and sky dungeons collecting the spells repair, purge, fog, and wind (heal, antidote, blind, and damage). Magic is best saved for healing, which as I mentioned can fail and still consume magic. In fact all spells seem to have a chance to fail. Even though I wasn't avoiding any battles, I soon found dungeons unbearably difficult. Mt. Osore was the last one where I could truly contend with the enemies; I picked up the Torch spell there, which would be great if the enemies ever lined up neatly. In the very next dungeon I found my characters dealing single digit damage. Somehow through running, two castings of flame per round, and a mix of enemies from earlier dungeons interspersed with the new impervious plant enemies, I managed to get through Oshima Island. The next dungeon, Mt. Ontake, completely walled me though.
After Mt. Osore I was level 15, and tried out the castle jobs. Castles only hire near the beginning of the month, and can offer spy or war battle work. Spying consists of traveling to the target, and selecting the spy command from the menu. It takes some energy to attempt. Resting is the only economical way to recover energy (there are expensive items that cost as much as the spy job pays). These jobs must be completed within a certain number of days. It pays well, but the inconsistent nature made grinding gold this way inefficient. Even though Oshima provided Blaze and Geyser, a couple of field war battle spells, no daimyo would take my party on as generals.
Strapped for cash and no way to grind in the dungeon I was told to go to next, I decided to return to Mt. Osore to get a few more levels and some gold for the best equipment. Also, Takeoka just wasn't cutting it. Even though he automatically gained ninjutsu (better ones than I had trained in), his power level was consistently below the main character's. I decided I would court a warrior class the next chance I got, and bid farewell to Takeoka. I considered a wizard class, but damaging spells are far too weak.