Game 18: The Final Fantasy Legend (GB) - To the Heights of the Sky

Balancing fun and challenge for a game is difficulty when considering all the variables in an RPG. How do you properly balance instant death spells, stone/paralysis effects, and enough pure damage potential to kill off one party member per round? The late game for many RPGs seems to come down to dumb luck, or some foreknowledge to prepare an impenetrable defense.
We'll get to all that in the fourth world, but first let's wrap up the third. I returned to town after being whisked away to a floating castle. The remaining people in town informed me that the Resistance was led by someone named Charles (never found him), and his two daughters were the key to the Sphere. I found one of them, Jeanne, hiding out in a small shelter surrounded by a forest.
Jeanne was assaulted by guards when we arrived. Our 'fellow' guards asked for assistance as they charged. Of course we came to the damsel's defense. After the battle, Jeanne told us her sister had been captured and was held at the floating castle. Still under the guise of a guard, I met no resistance getting to Mileille. She was very eager to get back to her sister.
Divulging Jeanne's location caused Byak-Ko to appear. Apparently Mileille had been working with him, and he knew all about my party besting Gen-Bu and Sei-Ryu. Instead of a battle, I was thrown in prison without a second thought. It wasn't much of a cell. The bars were like jelly, and bent easily.
While breaking out, I collected a key to a stash of items. Unfortunately I was overloaded. As I pondered about what I could discard, I realized the mutants had a higher defense compared to the human and didn't really need all their armor to have equivalent defense. They're now only wearing body armor, and I've gained two more slots apiece. Once outside, I lucked upon a working glider.
The floating castle had moved to Jeanne's hiding place. The shelter was empty, but so was the castle. I didn't know where else to look so I stepped outside only to find the floating castle had move while I was inside. We were now sitting near a clearing I searched previously; there was nothing there before.

Again the fight wasn't difficult. Even without Tara's Power ability (which I'm still sore about), I beat this boss within just a few turns. His magic was ineffective against Jaso who seemed to be immune to ice and fire. The power of the sphere that he spoke of was also a let down.
After the battle, even though I won, Byak-Ko disappeared with the Sphere. It turned out not to be the true Sphere. That was created from a tear drop shed by Mileille over the body of her sister. Well, Sphere get; time to move on.
What next? Back into the tower! Time to climb another set of floors with even more powerful... oh my, did Tara just die from full health? It seems getting rid of that armor may not have been the best idea. I'm glad I found a revive item earlier, which restores life without the cost of a heart. Enemies are easily doing 100 - 200 damage per hit, and I have a max now of 600. Facing off against more than four monsters at a time is just a roll of the dice.
This tower climb I found what could be considered a side quest. On one floor the inhabitants complained it wasn't raining, and on the floor above they said the lake was flooding. Someone had thrown garbage into it, which clogged a hole. Clearing the garbage caused the water recede, drain down the hole, and rain down on the level below. Everyone was happy, and my reward was uncovering a treasure alcove.
This time the next world was on the 16th floor, a small departure from the every 5th level theory I was developing. The same top hatted man was there to give me a hint. Something I remembered from my previous play through.
Upon exiting the tower, there was what appeared to be a cave just a few steps away. In those few steps Su-Zaku appeared. I ran, as instructed. Inside the cave a woman was directing me to follow her. She ran into some trouble, which I helped her through, and she pointed me in the direction of town.
I was happy to refill my stocks, but noticed all the cheap weapons were gone. I currently have no idea expectations of running a problem with gold reserves. I still have HP to buy for Jare, and it's starting to annoy me that I could purchase 50 HP200 (only increases by 1 HP after 200) for the price of 1 HP600 (which only increases HP by 5 - 20). HP200 is no longer available in the shops.
The townspeople spoke of a town to the northeast, a library to the north of the tower, and a power plant in the center accessible via the sewers. In the bar I ran into a scripted event where I attempted to order a drink, was challenged to a fight by a local gang member, and ran into the girl I helped who just happened to be the man's sister.
Now that we were all friends, I was brought into their plan to dispel the force field protecting Su-Zaku. To do so, they needed 2 or 3 more parts to some machine. A board was mentioned, and I'm sure I'll learn about the others one by one.
So, I now have multiple locations to look into. Akiba is the place where at least one part is, but its location is only detailed in a book at the library. The town nearby sounds like it might be deserted, but it could prove useful. Then the power plant sounds like a good place to find a power source for the device.
So, the combat: Andy_Panthro mentioned it was at about this point where necessary grinding reared its ugly head. I can definitely see a need for it as my resources are quickly drained after each battle. In fact, I don't even have the option of purchasing cure spells anymore. I'll see if I can't muscle my way through without resorting to a few hours of build up. Fortunately enough, my monster turned into a fairly powerful Tengu I believe. We'll see how it goes.

Game 18: The Final Fantasy Legend (GB) - From the Depths of the Ocean

Game 18: The Final Fantasy Legend (GB) - So a Human, a Mutant, and a Lizard Walk Into a Bar 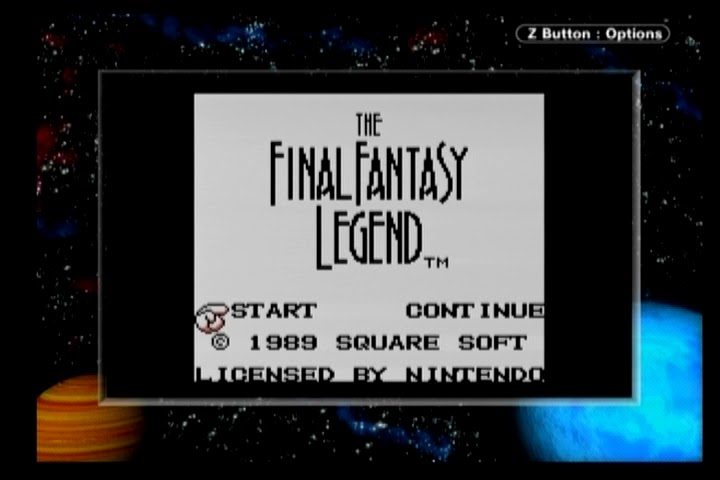