Game #35: Might and Magic: Gates to Another World (Genesis) - Why Game, Why? (Finished)

Another game comes to its conclusion. This was quite an adventure, but after such a long trek, I'm glad it's over. I don't think I'm sold on Might and Magic, but I'll hold of judgement of the series until the third game. Let's get on with the review.

Combatant - By far the worst balance I've ever had to struggle through. It ranged drastically from a simple battle (not often enough) to absolutely no chance of winning (nearly every time). It's definitely challenging to even get a foothold. There are a good number of spells, but more than half went unused. Enemies are well detailed, and the variety keeps going right up until the end. Rewards for combat are well done; however, items could really do without alignment restrictions. I'm knocking a few points off from the straight scale based on enjoyment and strategy. There's no back row, and no particular order or formation, even though the manual suggests it does.
Rating: 5
Admirer - It's hard to score this section when I never actually see the characters. I'm going to be a bit harsh and say that by the end I hardly saw any difference between the fighter classes. Mages had spells, which were nice, but straight fighters didn't have many advantages. I enjoyed playing with secondary skills, and yeah, that pretty much covers the characters.
Rating: 4

Puzzler - It's hard to tell from an overall score, but I gave a zero to the section that covers how clearly the next goal or main quest is defined. For the first third of the game I had no idea what I should do. My avoidance of reading the full manual contributed (I blame the previous owner who wrote notes in the manual pages), but this is the first time a game has disregarded any immediate direction while playing. Side quests were great, and the puzzles were good, even if some felt a bit arbitrary.
Rating: 4
Instigator - The descriptions of events were well done, but the story itself fell a bit flat. In fact, there's hardly a story at all. Sure I saved a king from dying, and did something with a computer terminal, but where's the explanation for why I did those things? The game also lacked NPCs. When it did provide one, it was either a merchant or quest giver. Most random clues were found scrawled on the walls rather than communicated to the party.
Rating: 4

Collector - There is a lot of stuff in the game, and nothing is lost forever. If a key item gets stolen or burned off in an acid bath, then the party can always return to where it was found and retrieve another. Unfortunately, there's no central place to store a hoard, not even in Hoardall's place. The economy goes down the drain so quickly that it's laughable. The best way to maintain rare or unique items is to create some characters or use the abundant supply of hirelings as pack mules left at the inn.
Rating: 4

Explorer - Time for the game to shine. The world is completely open from the beginning, and there's nothing like exploring it in full. Graphics and sound were okay. Sixty hours in though and the music got a little tiresome (and sometimes stopped altogether). I greatly enjoyed uncovering each square in the auto-map; in the end I still didn't uncover everything the game had to offer. This game loaded with content.
Rating: 8
Final Rating: 29 [48%]

A very respectable score for the age. Overall, I enjoyed getting through the game more than playing through it. Combat dragged on many times, mostly because I failed to find the auto-battle and skip turn buttons until late in the game. I'll probably still be thinking about all the mysteries in the game for months, even though I know I'll never get around to playing it again. It was nice to beat, and doing so again wouldn't take as long. Still if anyone wants to spoil a few things before I have time to look at a FAQ, then feel free to do so. Here's what's on my mind:
Huh, less than I thought. In any case, it's time to move on to the next game. Fatal Labyrinth will be an interesting challenge for the blog. As a rogue-like (rogue-lite?), there's not much story or puzzle elements to explore. I suppose I'll focus on my evolving strategy to get through it. Maybe I'll get lucky and beat it first try. I've never played it before, so this should be fun. First though, let's cut Mysterium. A game that defies genre classification so hard that it got thrown in with RPGs on a few sites.
Posted by Zenic Reverie at 9:19 PM 9 comments:

Email ThisBlogThis!Share to TwitterShare to FacebookShare to Pinterest
Labels: Might and Magic: Gates to Another World, Rating

Game #35: Might and Magic: Gates to Another World (Genesis) - Shouldn't That Be in the Manual?

Game #35: Might and Magic: Gates to Another World (Genesis) - Fabulous Fountains For Frolicking Frivolities 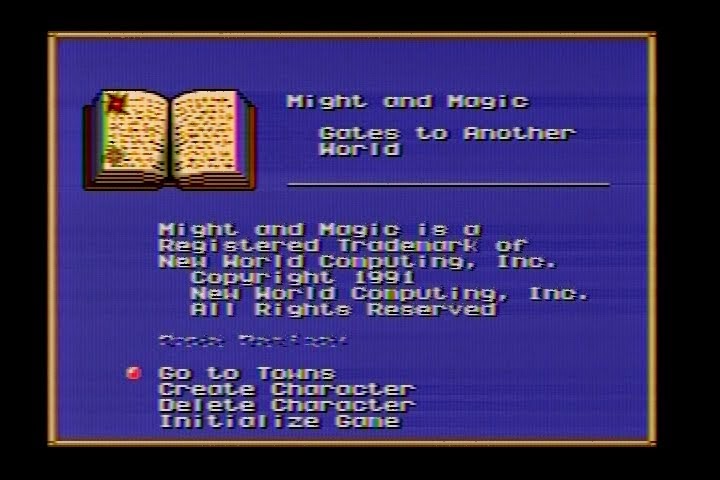