The little I've learned about the hero (heroine in my case) is that the woodsman is her grandfather. A beautiful nymph girl had a child with his son, but the son met an untimely fate after getting struck by lightning. None of that seems to matter yet. At present, I had the task of assembling the team. Before I could go after Taloon, I needed to cross the desert. A young man named Hector had a covered wago that would allow me passage; however, he'd lost hope in humanity after he was left for dead by a friend in search of treasure.
After fending off a couple of Nara and Mara imposters, I found the real ones. I answered a question only the hero would know (not sure what would happen if I got it wrong), and we reformed the party. We dug out the symbol of faith from under some rocks. Showing this to Hector made him realize that trusting others is essential to life.
The first town after the desert was Aneaux, a spa town. Had we arrived during the day we would have met a rather shady innkeeper giving tours of the town, ending at his inn where he charges twice as much as the other. Arriving at night allowed us to meet Ruvas, a ghost of an old warrior, who told us that his armor, called the Zenithian armor, was stolen. With no sign of Taloon, we continued on.
Taloon had just left the port town of Koneber to clear out the monster infested lighthouse to the east. Evil lights emanating from it had been destroying ships at sea. A newly built ship lay in dry dock, commissioned by Taloon, waiting for safe waters. My path laid out, I tackled the tower. I met Taloon at the tower. He welcomed my help, while he returned to and waited in the Koneber.
The final battle in the tower was a bit close, but we pulled through. Nara has a tendency to perish. Taloon joined the party when we returned, and provided the use of his ship to sail south. We arrived in Mintos hoping to find a map of the world. Old Howden, an adventurer retired to teacher, gave me a treasure map. Turns out it doubles as a world map, but there's a large X I haven't been able to reach. At the inn, Brey sat with Cristo as he lay with some kind of sickness. The princess had left in search of a healing herb called padequia in the town of Soretta. Brey joined us as we traced her steps.
The town had run out of padequia some years ago when they lost the entire crop to a drought. There is hope. A stockpile of seeds was kept in a nearby cave. Of course, it's become infested with monsters. Alena had already joined a different group of adventurers, the same group I'd met in Branca. Apparently they had room for her, but not me. While they were running around in circles, I managed to follow the correct arrow laid paths to the seed. Planting it in Soretta immediately produced the root needed to heal Cristo.
Alena joined, with Cristo. As we left, a woman who overheard our conversation told us of Ragnar. He was last seen headed to Keeleon, far to the west. As we departed to retrieve our last party member, Hector decided it was time to part ways. He asked us to take care of Primrose while he studied under Howden. We sailed west.
Healie was outside Keeleon, and pleaded that we rescue Ragnar from within. First we needed a magic key. On Healie's advice, we stopped by Haville. Nothing there except confirmation that Balzack was still at large. It took me rounding the continent before I came across the clue that the key lay at the bottom of the cave west of Kievs. The same cave where Orin was hiding out.
Ragnar wasn't stuck in some cell. He was bursting through the secret passage to challenge Balzack solo right as we arrived. Just six levels higher, the party consisting of the hero, Taloon, Nara, and Mara defeated Keeleon easily this time (save Nara, who perished again). Ragnar joined the party finally. With that, we'd collected all of the chosen. As we left, we learned that Balzack was holed up in Santeem Castle. I made note of the next stop, and rested.
Elapsed Time: 5h52m (Total Time: 20h07m)
Posted by Zenic Reverie at 8:36 AM 4 comments: 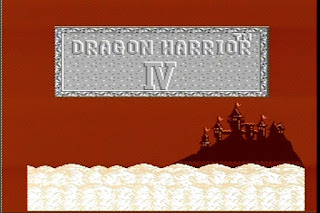