Below the Cut: Ax Battler: A Legend of Golden Axe (Game Gear)

Ax Battler was compared to Zelda II at its release; however, Zelda II does quite a bit more. First of all, this game has no experience levels. Beyond health, I'm not sure there are any stats to consider. Combat is action based with options limited to attacking and jumping. With the limited scope, I think the game has more in common with Gargoyle's Quest than Zelda. Towns exist, but don't support the usual stores. They're merely hubs for information on the next dungeon to tackle. There are training houses to gain special abilities like high jumping.

The game has a top-down overworld, random side-scrolling battles, and dungeons that include platforming in the same side-scrolling perspective. I'm not fully sure there are side quests, and no puzzles I saw in the first 15 minutes. Exploration is fairly linear, although I marked it as open in case it opens later. As far as I can tell, there aren't any items or equipment decisions, although upgrades exist.
Posted by Zenic Reverie at 8:54 PM 3 comments:

When last we left the party, their corpses lay at the feet (hands?) of the magic gauntlets. That encounter was by far the largest spike in difficulty I'd ever seen in an RPG. With the stakes so high (essentially perma-death), I decided to grind until I had a party capable of withstanding at least one turn against them and still stand. Admittedly, I went a bit overboard.
My initial plan was to train everyone as a fighter until about level 20. At some point I decided I needed some spells, and switched out three to gain cleric and mage spells. By the time I'd gotten through those, and ready to swap them back to fighers, my front line fighters were nearing level 25 and capable of great damage without any new gear. I considered keeping some characters at level 1, hoping they would be immune to level drain; quite the opposite it turned out. Level 1 characters that are drained are lost completely. Luckily I'd heeded the advice of some viewers to try it out with some stand-in characters. I decided on a new plan. I'd keep my front line fighters, and make a ninja to open chests.
So, I shuffled my classes around again: I upgraded one spellcaster to fighter, and changed a fighter to wizard for some additional spell power. At first I was grinding on Murphy, but I found the Magic Armor was worth more experience and only required dropping the KOD Armor to spawn again. After a while, I realized I could fill my characters' inventory with junk to avoid picking up the armor altogether. I also found that the magic sword was susceptible to magic, but it also had a chance to kill a fighter with a single blow. So, I grinded on magic armors. Five hours later I felt ready to tackle the gauntlets.
The sixth floor turned out to be mostly superfluous. There were immediately four doors after entering, and one led to an apparition that said, "One alone." I unfortunately explored half the floor before finding that one, and had some other clues that didn't lead anywhere. I figured I should return to that door with one fighter wearing all the pieces of the Knight of Diamond. I decided that fighter should be Strato as he was the only one with spells, so I leveled him up until he had over 300 HP, just in case. Well, it was completely without cause as Gnilda was waiting on the other side and just handed over the staff. I then returned to town to watch the ending sequence.
I was much closer to the end than I had realized. I feared exploring the entire sixth floor, but had most of it mapped by the time I attempted to enter that door solo. I knighted five other characters that assisted Strato, and then the credits rolled. I think the best part of putting this one behind me is knowing I don't have the third or fourth games on my list.

Elapsed Time: 9h59m (Total Time: 34h00m)
Combatant - Wizardry is punishing. It actively discourages taking risks. So much so that grinding on a safe single enemy is much more productive to accomplishing the end goal. Experience points don't scale well, and item drops are rare. Experimenting with spells, and how effective they are against each creature is discouraged by having a chance at a full party wipe. In the end, the path to victory is easy, except for those gauntlets.
Rating: 7
Admirer - Choose a name, and you're off. With little graphics there's not much to say about this category. Controls are menu based, which isn't the best for console. Aside from class changing, there's no customization.
Rating: 2
Puzzler - Honestly I expected a bit more in the way of puzzles. There's one huge fetch quest to get keys, which was trumped by point where instead of a key the party needs to teleport past it without any clue. Maybe some of this was lost in translation or porting, but there was another incident that spoke of different effects to certain spells that never was fully explained.
Rating: 1
Instigator - What? Story? Oh yeah, there's a dungeon where you collect a bunch of stuff and kill random creatures indiscriminately. At least when Werdna was running the show there was a pretense for why all these random creatures were about. There is a bit of lore here that's fun to toy with, but in the end it does little to sell itself. The little notes all about don't really help. Just enjoy the dungeon crawling for what it is.
Rating: 2
Collector - There is a wealth of rare equipment to find, but probably won't because you're too busy grinding on Murphy (or Magic Armor). The economy gets trashed by the mid-game that the developers put a useless money sink on floors three and four. Equipment strength is only gleaned by the resale value, and even that isn't an accurate indicator.
Rating: 4
Explorer - The graphics for the monsters are well done. The music is also really enjoyable. It's too bad exploring the dungeon feels so empty. There's nothing to find outside the of the keys that unlock the rest of the dungeon, and little else needs to be found. Just grind on magic armor to win.
Rating: 2

Final Rating: 18 [30%]
I definitely enjoyed this more than the first game, but the "final boss" is really a bit much. Sure it goes well with the rest of the series, but for this title it felt out of place. I expected the final encounter to have Tiltowait at its disposal, but with no way to actually stop it (no lucky silence) the party just needs the HP to tank it and deal physical damage capable of taking them out quickly. There's really no other way around it, and no sense of the impending doom. I'm not sure there's going to be a Wizardry game that turns out recommended. This one is another straight grind, with only a slightly more interesting dungeon to explore. The mapping was the best part.
And on that note we move on to games not so trying of my patience, and many more maps to make. Pool of Radiance is right around the corner, and Order of the Griffon offers a similar experience. First though, let's cut Ax Battler and move on to another D&D license: Warriors of the Eternal Sun.
Posted by Zenic Reverie at 8:34 PM 11 comments:

Email ThisBlogThis!Share to TwitterShare to FacebookShare to Pinterest
Labels: Wizardry: Knight of Diamonds 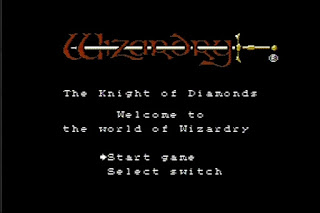