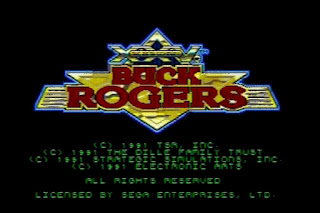 I'd like to know the story behind how this was chosen as a title to port to Genesis while none of the other gold box games made it. Possibly FCI already had an exclusive license for those, and only released them on the NES. It's a difficult engine to port completely, even on the Genesis' trimming content was necessary. Half the races, those based on planets, and one class was cut from the game.
There's a default party, but where's the fun in that? I created six new characters: 2 Desert Runners that excel in warrior classes, 3 humans that are, as always,  jack-of-all-trades with access to all classes, and 1 tinker that can only become a medic. This port misses out on the engineer class. Rerolling stats happens with the press of a button, and HP is rerolled whenever race or class changes. I wanted a good mix, so I settled on two warriors, one rocket jock (pilot), one rogue (security expert), and two medics. I thought medic skills, or any skill really, was an active ability rather than passive, and I liked the idea of maximizing my healing potential. Turned out that nearly every skill was automatic or encounter based.
In addition to stats, characters have a combination of 10 generic skills and 1 class specific. Every level a character gets 4 points to distribute among them, and characters begin the game at level 2. Skills are a mix of combat and encounter related abilities. Only 2 points per level can be put into a single skill. I'll explain skills as they become relevant.

Elapsed Time: 10h18m (Final Time: 10h18m)
Combatant - Combat was a bit too easy. I rarely felt challenged even when half my team was dying off. Enemies tended to feel samey, and their AI varied more based on their available weapons than anything else. I suppose it makes sense for grenades, rocket launchers, and plasma guns to do lots of damage, but it really hampers the strategic aspects.
Rating: 6
Admirer - There's a great deal of customization for the team, and even individual characters. The skill system comes into play often enough to matter. There might be ways to completely cripple a character, but who's going to invest in a perceptive librarian. The character portraits only include a male and female human version, even if other races are used. The battle icons are chosen from a set instead of built, but I suppose trying to fit one of the old gold box's mix-and-match creation kits might be a bit much to hope for on console.
Rating: 6
Puzzler - I gave this a rather average rating due to weak side plots, puzzles that work well yet are limiting (didn't get programming, can't do this part), and while multiple solutions exist for some everything leads to the same outcome.
Rating: 5
Instigator - One of the weaker points was the story. Everything seemed rather disconnected. The numerous space stations are rather sparse, and there aren't a lot of descriptions in the game for the various locations or equipment. Encounters spice this up a bit. In the end the story isn't formed around the player's actions, it's laid out as a path to follow.
Rating: 4
Collector - Nope, this is not a collector's game. There are quite a number of limited items. One could choose to attempt to find all the best equipment, but I'm not even sure where to start looking. Actually, it might be kind of fun to locate it just for the sake of doing so. The economy is well balanced, but there's not enough places to store equipment. I was lugging around armor off dead soldiers to earn a bit of extra coin, but the encumbrance system encourages slimming down inventory.
Rating: 3
Explorer - Graphics for the game are good, but the detailed scenes are great. Music had a good mix, but sound effects seemed more limited or rushed than other games. There's a good number of locations to find, but most are generic outposts until someone sends the party there. Overall there's not much to see here, and it all looks very similar.
Rating: 4

Overall a good game, and I recommend it (possibly the PC version) to any RPG, and especially gold box, fans out there. The tension kind of petered out at the mid-point, but the game didn't overstay its welcome. I do wonder what would have happened if I found that one Dupare guy, went to rescue Atha, or even investigate the ship escaping from RAM to Ceres, but in the end the game is won and RAM was routed. I'm sure everyone is doing fine. 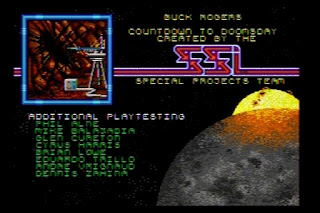 Now on to cutting a game from my childhood. ActRaiser is a simulation-action game with very slight leveling mechanics. Someone called it an RPG, so hopefully I can explore it enough to show why it's not according to my scale. After that we have The Faery Tale Adventure, which I believe Chet tried to play, but gave up on it as it was too boring. Let's see if I can manage any better. 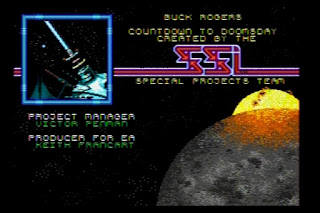 Below the Cut: Robin Hood: Prince of Thieves (NES)


Once again I was taken in by cheap promises. At first glance I thought this had a more open world, and possibly side quests. At the very least I was expecting a bit more autonomy, but the game has carefully scripted levels and paths to follow. No riddles or puzzles, and a definite lack of descriptive lore. I suppose the player is expected to have some familiarity with the game through the movie, or possibly other Robin Hood related media.

Character advancement is limited. For every enemy defeated a small amount of experience is earned. Eventually Robin will level (the rest of the party shares his level), and his HP and carrying capacity rise. It's difficult to tell if attack and defense stats increase as well, but if nothing else Robin became more adept at using equipment with each level. A medallion that increased defense by 2 eventually raised it by 4. Given this, I'm not sure character stats really matter for combat, but I'm going to give the game the benefit of the doubt. Equipment was very limited though, only one piece of armor is useable at any given time (said medallion replaces leather armor), but weapons range from bows to ball and chains.

Multiple characters gained a point because they do join the party, but they're only controllable during the group battles. All other times they might as well be pack mules. If I were being truly spiteful this would easily score a 6 or lower. Honestly item decisions only cover healing items, but there is some variety there and they're quite limited by the end of the game. The combat is action based, and the duels are particularly reliant on the player's skill. The game is short , so by the time I realized this probably wasn't an RPG I was already completing it. Hopefully I don't fall into this trap too often. They're fun diversions, and not too long most of the time, but they do take up a night better spent on other games.
(Time Taken: 3h06m)
Posted by Zenic Reverie at 12:08 AM 6 comments:

Elapsed Time: 21h35m (Final Time: 34h43m)
Combatant - There's little tension during combat. Most of the time, it's targeting their flagship is simple. Strategy is minimized. The AI doesn't vary between opponents or even countries. Stats seem to matter, but it's hard to determine how much influence they provide. Combat is beneficial as a strong fleet will have a lot of gold and enough reserves to act as a temporary port to restock. The gold usually covers the loss of men and ship damage. In the end though, it's better to act as a merchant to make money.
Rating: 3

Admirer - While there's no feedback for how stats advance, it's obvious they rise from use. By the end of the game there's hardly any customization as stats easily max out. It's not clear what the various figureheads for the ships accomplish, and the ships always look the same. This is the first game where I was actively fighting the controls to make the ship head the direction I wanted.
Rating: 2
Puzzler - The game does well with it's main quest. It's always possible to get the current step from any waitress, but if there's no active quest there's no motivation given. I'm not sure about side quests since everything leads to fame, which seems necessary to advance the main quest. Searching for the treasure with the map was my favorite quest. The multiple ways to complete most quests is encouraging for general exploration.
Rating: 3

Instigator - The story is built on the idea that the player is supposed to amass a nest egg and marry the princess. It builds up slowly, but never really advances much beyond that point. The NPCs are helpful for information, but history and lore are rather light. I never felt involved in a large story arc as the quests were handed out in pieces that rarely connected.
Rating: 3
Collector - There are a variety of items to purchase, but most are bought and forgotten. Treasures can be gifted to the princess, but (like many things) there's no explanation how this influences anything. There's no knowing how many treasures or items are actually in the game.
Rating: 3

Explorer - The graphics and music are good; I enjoyed the soundtrack quite a lot. The world is quite large, and completely open from the beginning, only limited by food and water. While finding ports is nice, I hoped there was more to discover. Every town is basically the same, and it's hard to get a sense for actually discovering new land.
Rating: 6

Final Rating: 20 [33%]
At this point I'd say that's a fair score. While I enjoyed the game, it falls short of a pure RPG. Even though it scored enough on the scale for inclusion, it doesn't hit a lot of the points to rate among the best RPGs. Most edge cases will fall into this area. If you enjoy this time period or a simple simulation game it's a fun diversion, but as an RPG it doesn't fulfill the itch. After the first day I was already looking forward to getting to the next game. Buck Rogers: Countdown to Doomsday is a strange game to bring to console, and I'm curious to see what steps they took to port it. Judging by the lack of a sequel I can guess it didn't do too well.
Posted by Zenic Reverie at 7:42 PM 8 comments: