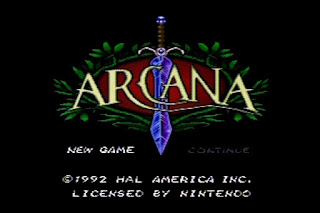 Elapsed Time: 8h42m (Final Time: 8h42m)
Combatant - Combat is incredibly easy if you know how to use it. The first two chapters are mostly a breeze, but some elemental cards are useful. This is really the only interesting strategy in combat as most battles don't generate enough gold to continuously spam them until the Ice Mine. Enemies are interesting and well animated, but seem randomly clumped together. Character stats don't make as much of a difference compared to equipment upgrades. With little challenge or variety, it's a rather generic experience.
Rating: 4
Admirer - Characters level up via experience, but grinding takes a while with very little difference in the long run. There's no customization, and attack animations don't reflect any of the equipment a character uses. It would have been nice to see the fist animation used when Darwin was weaponless in Stavery Tower. Controls feel sluggish, and moving in a dungeon is a slow process. I do like the variety in character portraits and animations.
Rating: 2
Puzzler - One thing you may have noticed is I didn't describe the dungeons very much. That's because they're devoid of anything resembling a puzzle. There are no side quests either. It's a straight shot from the beginning of a dungeon to the boss with some scattered chests and A LOT of combat.
Rating: 1
Instigator - The story while not great does it's job by motivating the player to continue playing. There's no intrigue worth playing out, and the world tends to lack description. Most equipment and spells do have a little something. I never really felt this was a believable place. It lacked some common sense, like allowing Salah to run off on her own after the harrowing dungeon crawl we just had. Decisions seem to make no difference to the plot, although I still wonder what refusing Darwin would look like.
Rating: 2
Collector - There's a bare minimum variety of items, but the honey pots are enough incentive to seek out every chest. The economy never became irrelevant as equipment is expensive, cards are a constant sink, and buying honey is eventually an option. Inventory is limited, but I only ever hit the card limit. The strength of equipment isn't always obvious, and there's no way to really know if you've collected everything. There's not much use in doing so though. The only equipment that can be invoked are those already equipped in battle.
Rating: 5
Explorer - This would have been higher if it was possible to actually explore the world. The music is fantastic, but the environment graphics are rather drab in the dungeons. The towns are navigated by switching to fixed points for each building. There's a lot of chests to find, but nothing else of interest. The music really sets the atmosphere for the whole game, but I wish it was more rewarding to search the whole map. The chapter based divisions cut off past areas, and make it impossible to skip any location.
Rating: 4
Final Rating: 18 [30%]

Overall an enjoyable experience, and I'm glad I got to play it again. Other reviews of the game compare it unfairly to Dungeon Master. Aside from the first person perspective, I really don't understand the comparison. Combat is turn based, characters have set classes, and the enemies aren't visible until combat randomly occurs. It has more in common with Wizardry where instead of one large dungeon, we get different towns with smaller locations that grow in size with each chapter as well as a fixed cast of characters. Given that comparison it's an easier version, if not a step up for the turn based dungeon crawler. HAL never again bothered to localize another RPG, and instead focused on their Kirby franchise. It seems they had a hand in Earthbound, although it's not clear what role they served. The also had an action-RPG called Alcahest, heavy on the action.
Apologies for the late post; I managed to injure my hand last Saturday, and it's taken a week to heal enough for me to type again. I haven't fallen behind though as I haven't been able to play either. Next up is Order of the Griffon, which I know very little about. TurboGfrax-16 is a system I never owned until a couple years ago, and I've been eager to get to this. It either has some involvement from SSI (seems to have a gold box style engine) or just licensed the rights to create an AD&D video game. Westwood Associates was also involved, the creators of Warriors of the Eternal Sun. I'm not sure if the same group of people worked on both, but the same company gives me hope.
Posted by Zenic Reverie at 4:25 PM 10 comments:

Below the Cut: The Legend of Zelda: A Link to the Past (SNES)

The Legend of Zelda: A Link to the Past - Rating (9 RPP)
1) 1 - Character Advancement: practice/experience based advancement, stat or level increases, multiple classes or characters, customize characters
2) 1 - Combat: character stats used for combat, additional combat options, turn based
3) 1 - Items and Equipment: store to buy and sell, equipment decisions, item decisions
4) 2 - Story: main story at the forefront; world full of hints and lore; descriptions for objects, people, and places
5) 2 - Exploration: open world from the beginning, visited locations remain open
6) 2 - Quests and Puzzles: side quests not related to the main quest, puzzles and riddles to solve

This is my favorite of the series, although I haven't played in a long time. It was one of those games I so eagerly waited to play as a kid that when we did get it I pretended to be sick the next day on the following Monday. This game offers such a polished update that I often wondered why other game series weren't as good.

While the Adventure of Link offered more RPG style play with experience, levels, and stats, A Link to the Past lives up to its name by going back to its roots of equipment upgrades, no character combat stats, and rupees. With such a deep world with side stories and quests, puzzles and riddles, and a world to explore that expands to double its size by the end, it's easy to see why some call it an RPG.

Like I mentioned in my previous article on cutting adventure games, there's a emphasis in Zelda of the player improving, and less of one on the character. Genres lines should divide games based on how the game is played. If the player is expected to actively maneuver the character to gain an advantage, then it shifts towards an action game. On the other hand, if the movement is not active, or if there's no movement in combat at all, then it abstracts it in such a way that the character is more involved in combat than the player. The player only influences actions, and the character stats and situation determine how effective that action is.

Action-RPGs blur the line by giving character stats that improve actions while still relying on the playing to time them. The defining factor here is that the character improves and it becomes less important that the player becomes better at the game. Still, the action elements are present, which is why it's a hybrid or sub-genre.

The best genre definition I've seen, and the most commonly used, for this type of game is action-adventure. Basically, it's an action game, but much of the game has adventure elements where certain items are needed to progress (placing gems in slots, speaking the correct phrase, or merely having the right key). There's an emphasis on inventory or environmental puzzles. More and more games are picking up RPG mechanics by including character upgrades, equipment, and items that add abilities or increase stats. Going forward we'll see more and more edge cases.

So what to do? The scale's first two points separated character advancement through repeated action from stat increases to give extra weight to the first point; the main difference is a feeling of unlimited growth versus predefined upgrades. Of course, most games have a level cap (maybe not all), so it's not completely unlimited, but level caps are rarely reached. Invest a bit more time, and the played can have an easier time by gaining a few more levels. There's a pitfall here; it's sometimes unclear how powerful the character should be at any point. This makes the experience feel a bit more open, rather than having static upgrades that enforce the idea that a designer intended a certain amount of power before moving on.

The Legend of Zelda games have health upgrades in the form of heart containers and heart pieces introduce in this game, but that's the only character stat that increases. Some are hidden, and if the player finds the game difficult there's the option to seek them out. However, attack and defense power are directly linked to Link's equipment. His abilities are dependent on him finding tools or upgrades. Unless a player gets better at a game, or finds a way to get an upgrade early, options are limited when faced with a difficult boss.

In the end, if a game is labeled as an RPG then I expect to have the option to grind, even though I rare choose to do so recently. The scale isn't perfect, I'll be the first to admit it. A game could skew the scale in some way without being an RPG. I've yet to find such a game on console, but it could happen. That'll be an interesting day.
Posted by Zenic Reverie at 6:33 PM 6 comments:

Email ThisBlogThis!Share to TwitterShare to FacebookShare to Pinterest
Labels: Cuts, Nintendo, SNES, The Legend of Zelda: A Link to the Past
Newer Posts Older Posts Home
Subscribe to: Posts (Atom)