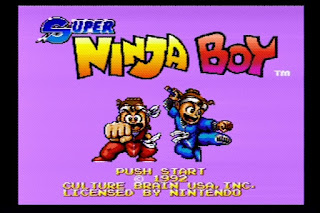 
Elapsed Time: 10h22m (Final Time: 10h22m)
Combatant - Always a mixed bag with this series, I felt that equipment more than anything else outweighed combat ability. This meant there wasn't a lot of challenge to be had. There are a good number of spells and abilities, but they don't contribute a lot. Enemies differed enough to keep things interesting, although bosses tended to feel very similar. Rewards for combat were satisfactory. The number of random encounters could probably be cut in half without much downside.
Rating: 5
Admirer - There's no customization at all, and character appearance doesn't change to show new equipment. The controls were well done, although it would have been nice to have the manual as I'm sure it mentioned that holding punch allowed Jack to run, which I didn't learn until more than halfway through the game after all the points it would have been useful to know. What is it with me, and not finding the run button until hours into a game?
Rating: 2
Puzzler - The main quest is clearly laid out, so there's no chance of getting lost. Side quests are strangely sprinkled across the world in the form of mini-games. Some reward with items, others medals, and I believe one was even required to beat the game. All of them seemed more random than strategic, as I remember all of them were just a form of flipping over cards.
Rating: 3
Instigator - The ninja brothers once again sense evil and defeated it. The wackiness of the whole adventure isn't of a type I usually enjoy. Maybe it found its audience though as we continue to see sequels coming out, the last of which comes up soon. NPCs do well at providing hints, the most important of which usually live in a house in each town. There aren't any decisions to be had, and descriptions are somewhat lacking.
Rating: 3
Collector - Aside from gear, which is upgraded by comparing prices (stats for gear aren't actually displayed anywhere), there are a small number of other items, and not much in the way of collectibles. Magic is about the only thing tucked away for the finding, but I didn't find a lot of use for the hidden ones and there's no way to know if they've all been found. Each item has its own limited capacity, but there isn't one of the total number of items.
Rating: 3
Explorer - It's not a bad little world, although exploration is rather linear most of the time. Even when a new transportation method opens there aren't a lot of new places to branch out into. There wasn't anything offensive about the graphics or music.
Rating: 4

Final Rating: 20 [33%]
With only a single point above Little Ninja Brothers, I have to wonder why I remember the previous title with such disdain. Maybe it wasn't as bad as I recall. Maybe it was the extra five hours I spent with the game. As bland as this was, putting up with it for only 10 hours didn't sour the experience. It helped that it wasn't overly difficult either.

Before we get to the sequel, I'm going to give myself a small break with Great Greed and Might & Magic 3 just after. (Well, maybe it won't be that small.) I've never played, or even seen, Great Greed, so I'm eager to see what it has to offer. From the little I've read, it has some kind of environmental theme going for it. But, Might & Magic 3 is what I'm really looking forward to next, so I hope Great Greed is either short, or incredibly interesting.
Posted by Zenic Reverie at 11:35 AM 6 comments: