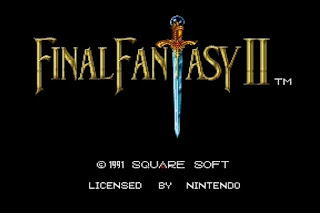 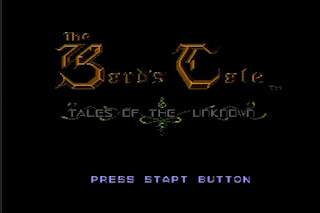 
Welcome to another edition of, "How did this make it onto the NES from PC?" Well, the answer as always is because of FCI and Pony Canyon. It's just a bit odd in this case because Interplay already had experience creating a game on the NES with Swords and Serpents; however, as far as I can tell, this port first started as a Japanese title, and was translated for the North American market. Maybe it was a package deal since EA controlled the license for this game and others FCI published. I'm fairly impressed at the conversion done for console, granted many things were removed. This version is much simpler, and thus easier, than the PC.

Thus ends The Bard's Tale. A rough adventure to play through today, but much easier on the NES. There's no level draining to contend with, and no stone status effects (even if there were, there's a spell to cure it) to bog down the final dungeon. Of course, like most games that let you create characters, if you choose the wrong party, then you're going to have a bad time.

Elapsed Time: 24h21m (Final Time: 24h21m)
Combatant - Combat is a fair challenge throughout the game. There are some interesting strategies, but most come from spells and songs. Useable items are onetime use, even the instruments, which I thought had charges. With such limited inventory it's hard to devote any to those kind of items. The rewards for battle tapered off too quickly, but unidentified items were plentiful. Having two wizards made most of the later half of the game an easy ride.
Rating: 6
Admirer - What guys? Where? Gone is the ability to change classes for magic-users, so nothing is customized beyond original character classes, and names. There aren't any options to advance. The controls are as good as expected, nothing fancy. One nice thing I didn't mention elsewhere, is that the instrument the bard has equipped will change his songs slightly. I only noticed when changing from Lak's Lyre to a Frost Horn, but the pitch dropped when I did. I'm curious what a flute would sound like.
Rating: 2
Puzzler - The main quest, is probably the longest roundabout way to get to Mangar possible. Early actions of the party are ill-defined as the right ones, but there's little else to do. There are no side quests; however, the puzzle elements introduced in Mangar's Tower were a nice touch. The magic mouths are interesting as well, but who placed them? Gone are the scribbles on the walls.
Rating: 3
Instigator - There's not much narrative to follow. How Tarjan's revival is linked to Kylearan's awakening isn't fully explained. How the heretics took over the temple housing the ancient king's tomb isn't explored. I'm not even sure we can call this The Bard's Tale without a bard at the guild singing a song. The disembodied magic mouths are the only source for plot progression until we get to Kylearan. There's no input from the player to decide how the story should proceed.
Rating: 2
Collector - There's a good amount of stuff, and while not free, it's possible to store it all at the shop. Selling unidentified items destroys them, but if identified first, the shop owner will keep them around in his sale list. The economy never became irrelevant for me, but if a party of magic-less freaks showed up, they'd probably be overflowing with gold after the sewers. Good luck with that though, having no healing. Deciding between one piece of equipment came down to price.
Rating: 5
Explorer - The music is good (although some songs are questionable), and the graphics well done--even if a bit repetitive. Exploration isn't really interesting. All the taverns look the same, and there's nothing to find on its own unrelated to the main quest.
Rating: 3

Final Rating: 21 [35%]
I enjoyed this game far more than Wizardry, and not just for the reduced difficulty. Okay, maybe a little for the reduced difficulty. Not having to wipe out multiple times in hopes of getting a lucky few to level 2 was nice. I really don't think beating the NES port is anything to brag about though, and I don't know who I'd recommend this to beyond the die-hard dungeon crawler enthusiasts. It's not really one you can sit down and enjoy casually. For that we move on to our next game.
Final Fantasy II (IV) is next, and so far has proved even easier than I recall. Let's not waste any more words on the anticipation. Without further ado, let's cut close to the bone as I take a hard look at a beloved console RPG.
Posted by Zenic Reverie at 2:48 AM 6 comments:

Elapsed Time: 6h24m (Final Time: 16h14m)
Combatant - Overall, combat was very easy, but also dependent on party make-up. Some parties are more challenging than others, and depending on the build with equipment it can change the dynamic quite a bit. There are a good number of strategies to play with that keep things varied. Enemy variety isn't quite there for random battles, and there aren't a good deal of rewards for fighting since without experience points some fights feel meaningless.
Rating: 6
Admirer - High customization really shines in this game. Unfortunately, due to the platform this game is on, a lot of features are limited. Appearance of the party doesn't really change, and some points here like advancement options only exist with some members.
Rating: 5

Puzzler - For a clearly defined main quest, one that keeps pushing the goal onward, this category scores as it does. There are no puzzles, no side quests, and without those this category tanks.
Rating: 2
Instigator - The plot progression is interesting, and I enjoyed the turns along the way. Descriptions are a bit lacking, but the platform and limited space on the cartridge are more to blame than anything. It was a fun, light journey right through the end. There aren't any decisions or branching paths, just the main line. Having each character speak a part seems a bit odd since they're so interchangeable. Almost like no matter what I choose, they always come with the same personality. The memo feature, which acts as a journal for key events, won't be seen in many games.
Rating: 5

Collector - There is a lot of stuff in this game, but good luck collecting it all or even knowing what's best without degrading durability. The gold economy does well to stay relevant until the near the final battle with Apollo where it just falls apart. Party inventory is once again limited, and there's nowhere to store things for later.
Rating: 3
Explorer - For a Game Boy game, the music and graphics are very well done. It's an interesting place to explore, and the world is consistent. Unfortunately, due to the size of the game, I think the number of places to find is limited only to the essentials. Worlds are closed off based on plot points, even when it doesn't make sense how some other characters can get through a door with much more limited Magi.
Rating: 5

Final Rating: 26 [43%]
It scores a fair bit more than the previous game. With great improvements in a number of places, I'm looking forward to the next installment even though I hear it does some strange things. The battle system has matured, and I feel that the story has definitely taken a step in the right direction. The game world might be a bit too limited by the platform. I'd like to see the limited inventory done away with.

In any case, time for some The Bard's Tale. Remember when I ended the last game saying how I far behind I was in posting. Well, it hasn't improved. I'm already finished with that game. There's not much to talk about beyond the mechanics though, so I feel a single post will do. I'm also well into Final Fantasy II (IV), and will be due to make a post for that this weekend. It's amazing to see the jump in quality, but we'll get there soon.