Game #40: Uncharted Waters (SNES) - The Life of a Peaceful Merchant 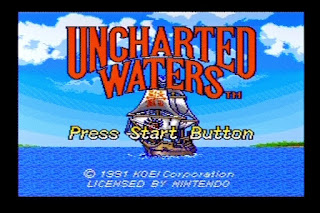 Deciding what's an RPG or not is difficult, especially for games like this. Combat is usually a deciding factor, but in this case it's really the open world, trading system, and a small amount of character advancement. While it has turn-based combat, it plays such a minor role in the beginning that it's easy to forget it even exists. This is one of those edge cases that I felt should be included for its unique experience. The game was released for the NES, SNES, and Genesis in the US, and from what I've seen there are minimal version differences. I chose to play the SNES version due to cost and console preference. I was lucky enough to find a complete copy. The manual has been more helpful than the map, but it's nice to have both.
The player controls the sole member of the Franco family. While you can name him, it defaults to Leon if no other is chosen. Stats for charisma, wisdom, intelligence, courage, and strength are randomly rolled along with bonus points. These slowly raise through use, but knowing when they've increased and why is a mystery. With such descriptions as "sense of mission" and "determination" I'm not really sure how they factor into the game. With those values set, it was time to name the ship and begin the adventure.
The game starts off in the port of Lisbon, capital of Portugal. I had some advice from the manual to sell off my current stock of trade goods, and purchase sugar to sell at the next port. Most ports specialize in at least one trade good that can be bought low and sold high at other ports. I got my business going by taking sugar to Bordeaux, buying grapes to sell in Antwerp, and lastly pawning off more sugar to London. I then took a shipment of either porcelain or wool down to Lisbon and repeated the process. At first I didn't have this full route down though because discovering ports required me to be right next to them.
The map that came with the game is fairly accurate to the real world. Unfortunately, the game is not. Although I found London, locating Antwerp or Hamburg took some extra equipment. Once I made some nice cash flow I invested in a few items like a telescope and sextant. The telescope helped me spot ports from over half a screen's length away, and the sextant meant I would never get lost as I was whipped around at the mercy of the wind. Controlling the ship is difficult. All you can really do is aim and hope the wind and current pushes the fleet in the right direction. The manual says the winds and current change based on the time of year, but I have yet to determine a pattern. In any case I'd rather push through slow waters than wait an extra month or two for the right trade wind to pick up.
Simply trading and getting my name out there increased my fame ever so slightly. This score, along with sailing level and battle level, seem to be what impresses mates to join the fleet. Mates are different from the rest of the crew as they can captain other ships. Each ship needs their own crew, but they can share the water and food supply of the entire fleet. There's still a message when a single ship runs out though, so there might be some penalty for that. If there's trouble on one of the ships the crew will silently dwindle, and then the ship will suddenly vanish.
Eventually people sought me out to complete trading missions. At first they're easy things like sugar, wool, or art, but soon they'll ask for things like coral and ivory that take months of travel to gather. The first time I sailed to the Americas I actually lost one of my larger ships, a Bergantin. It simply vanished in the Bermuda Triangle (might have had something to do with only having 20 crew members). Once I gained enough fame through carrying out merchant missions, the king of Portugal summoned me for a very special mission. It was on one of these missions I was seeking out the coral. Luckily my other four ships carried on to complete it.
Ports have up to seven points of interest depending on location. The first is the dock, which is used to shuffle supplies and men; restock food, water, and lumber (used to repair ships away from port); and set sail. This is naturally at every port, but some distant ones only have this.

A greater number have a lodge, inn, and market. The lodge allows the player to look at stats of the crew, fleet, or port. The most important of these is probably the port where it's possible to see the current market swing for goods, which ranges from 50% to 150%, and the popularity of each nation with that port.
The market is the central place to buy and sell goods, check current local prices, and invest in the local trade. Investing in the market increases support for Portugal, and will eventually increase the number of trade goods sold. If the popularity of a country reaches 80 or more, then the port is considered allied with that nation. This increases revenue for the king, and more importantly gives myself the opportunity to get a discount when purchasing goods.

At the inn it's possible to tip waitresses for favors, or buy a round for the bar and hear the local gossip. This is also the location to seek out mates and crew. Whether or not mates are available is random, and even if they are present they won't always join: probably dependent on fame and experience. To hire crew just toss out a few hundred coins and see who signs up. I thought the idea of having a big crew was to survive storms or battle with a serviceable ship. I hadn't entered combat at the time, so I kept my crew to a minimum. After all, the more crew, the faster I ran through my rations.
Even fewer ports have a shipyard and a guild. The guilds are where it's possible to buy equipment. Equipment ranges from items that assist (invisibly) with combat and sailing to more useful (read as obviously helpful) like the telescope and speculum. The speculum gives a bird's eye view of the surrounding land, and marks any ports I've already discovered. The shipyard is the place to buy (used or new) and sell ships, fix up my current ships, remodel a ship, or invest. In addition to increases popularity for Portugal, investing in the shipyard can unlock access to better ship types and figureheads. This is where remodeling comes in; a figurehead can be attached for some added defense. Remodeling also has options for changing the type of guns to use, which I'll get into when I talk about combat next post, and renaming a ship.
Lastly the castles, only three exist in this game and correspond to the three major countries at play: Lisbon, Portugal; Seville, Spain; and Istanbul, Turkey. Wait, why isn't it Constantinople? Isn't that historically accurate? In any case, outside my own country, and only if I'm on friendly terms, I can visit the other castles. Half the time, I get granted an audience where I learn about a country's sphere of influence (i.e. get a list of allied ports). It's good information for learning about what ports are out there.

As for Lisbon, I can request gold or men when I'm in good favor with the princess and king. I haven't tried to ask for gold yet as I don't want to have the possibility of paying interest. Savings serves as a bank where I can store up to 10,000,000 money. This is very helpful as there's a cap of 60,000 that I can hold at any one time no matter how big my fleet is at the time. The secret call is used to speak with the princess. Meetings come more easily with more ranks. For each completed mission from the king I get to move up one rank. There are nine, and my best guess is that reaching Duke is at least the first major goal. Some missions are as easy as taking a letter to the king of Spain while some are more time consuming, like getting coral from Santo Domingo. Each rank increases the market discount possible from allied ports by 5%.
The majority of my time has been spent trading, making money, and just exploring. After I maxed my fleet at five ships I focused on buying bigger ships. Trading with the new world wasn't really worth it since it took so long to reach, but the game paces itself nicely by having the king give missions that slowly expand the area required to advance. Once I reached max gold I then focused on investing in ports, which greatly increased my fame.
Before too long I had reached rank four, and it was much easier to invest as I received huge discounts from purchasing at allied ports. At one point all the ports in the Mediterranean were allied with Portugal. Pisa was integral as it sold art, and everyone else was paying a premium for it. I had yet to set foot in Turkish waters though, as I had heard Portugal was at war with them. I wanted to avoid combat as much as possible with my small fleet of two Carracks and three Latins. Of course, all that would change I was thrust into the middle of the war with Turkey.
Well, I can't exactly turn down the king, can I? I never tried honestly as I too afraid it'd affect my rank or fame. I suppose it's time to finally trade in the Belle and my other Latins for Carracks. Then it'll be time to hunt down Ali. The local gossip is he's been seen near the southern tip of Africa. I guess my only hope is to just run into him at some point. It's a great big world out there, and I expect it'd be pretty difficult to find a single ship in the vast ocean. Next post I'll go over combat, and the anguish of attempting to track down Ali.