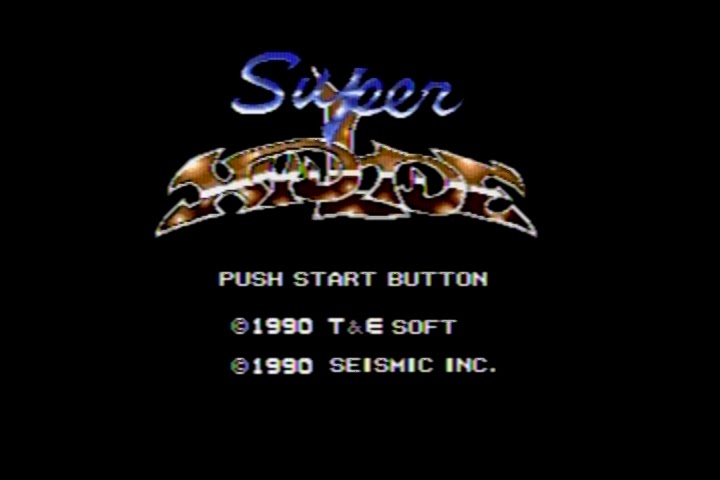 
I'm going to spoil you guys... I just know it, three posts in a row. I have to tell you, I was not looking forward to this game. I heard from a couple of sources that it was just as bad a game as the first. It's been a pleasant surprise so far, although there are some quirks to it that I can see would rub some people the wrong way. I think I've been a little light on the details in the past, so I'll dig a little deeper with this one. Luckily I have the manual to help me out.
The back story is a rather generic, but I don't expect much from these early games and my expectations of this one are already low. Deep in the heart of Fairyland they've known only peace for many generations. An old evil may have returned. How else would you explain the giant crack in the ground followed by a pillar of flame reaching the sky? Those living in the nearby city of Forest have selected a youth to be their champion and investigate. Following their choice they wonder if they made the right decision... that's comforting.
Character creation is simply selecting a name and class. I chose monk out of that, Fighter, Thief, and Priest. Fighters are generalists with average stats. Thieves are actually more physically capable, but start with low morals and very little magic power. Priests are physically weak and have low armor, but great magic power and morals. Monks excel in nearly all attributes except hit points. Stats are randomly generated and can be re-rolled before confirming.
The game starts in the city of Forest, where I suspect the townsfolk shoved money into this poor sap's pockets before leaving him to his own devices. I wondered into the weapon shop, and deftly avoided the first major pitfall, item weight. It's possible to buy all the basic gear with starting gold, but the weight of all that equipment will slow movement to a snails pace (actually slower).
Weight capacity increases when the character levels up. Levels are gained by killing monsters for experience points that are exchanged for levels at the local temple. Experience points are also used to purchase spells, which introduces an interesting dynamic. Fighters and Thieves pay double for spells, and they can only learn the first six out of twelve.
In addition to juggling weight, experience, and spells, the game is further complicated with the need to eat and sleep. Eating is automatic if the character has food rations (which are obscenely heavy), and sleep is only initially taken care of by the inn. Some camping gear is found later, or so I've read. Forgoing food results in hunger, which drains health, and without sleep the character's stats start to drain temporarily.
One last thing to note is a handle attribute, which limits the use of weapons. If the weight of a weapon is higher than the handle weight of the character, then the attack power is subtracted from the character's total attack ability. This means while I could afford and carry my new ax, it was weaker than my club until I leveled up.
Whew, that's a lot to take in all at the beginning of a new game. Without the manual I'm not sure I could have inferred all that; there are no warnings in game while purchasing equipment. I can guess many a would-be-adventurer bought the best gear they could afford before stepping outside and walking as if through molasses. (I actually did this while testing out the game... I wondered if my controller broke because I didn't move at all for a solid 10 seconds holding the d-pad).
Like Hydlide, combat is in real-time, but this game improves upon the charge-to-attack method of dealing with monsters with an actual attack button and weapons with range. Maneuvering around enemy fire is still a necessity, and it's best to sneak up behind or attack from the side, or if a frontal assault is imminent there is a crouch button. Normally, crouching is used for searching the ground, but it also increases evasion.

Let's finally get on to some of the game. I stocked up on some food rations and healing medicine for safety, and grabbed a club before heading into the field. I nearly died within the first minute due to underestimating the damage done by enemy projectiles. I popped open my first medicine to save myself, I'm sure it wouldn't be the last. I spent some time grinding on a few of the more docile enemies.
I was quickly weighed down with gold (yes, gold has weight too) and headed back into town to get my first level up. I also picked up the first spell, Illusion, which seems to spin enemies and myself around in place. I think it changed the music as well, so maybe it has a timed effect (manual says it just turns the enemies around). It's at this point, buying more supplies, that I noticed the cost had gone up a bit, and I then remembered something about a moral fiber attribute.

The way the morals work in this game is that enemies in the field are really broken up into two categories: good and evil. Good enemies are docile and won't attack unless provoked. Evil enemies launch into attack mode as soon as you're near. Well, I wasn't exactly waiting around to figure out the difference. I must of plowed through too many good enemies because my moral compass was lost (completely destroyed more like it). I had a 0, and somehow think it would be negative if the game allowed it. Ah well, I guess I'm evil.
It was getting late (in-game time), so I headed over to the inn for a nap. Well, the inn is actually rather expensive, so I ended up needing to eat my last food ration to free up some weight in order to grind up some more gold. It seems like it's too easy to fall into a vicious cycle of killing enemies for gold just so you can sleep at night without losing your ability to fight. Sleeping is also how the game is saved.
Feeling more comfortable and confident after a couple of levels, I started to branch off in straight lines from the starting town. I found some points of interest rather quickly: This last place had a sound test for the music in one of the buildings. It's an odd addition to the main game, but a nice easter egg if you like the music. Personally, I'm not a fan of it, but it's not too grating. As far as I can tell it's all synthesized tracks. I think the title track is my favorite if I had to pick one, but I didn't sit long to enjoy them as we have a land to save, and probably a princess if we work our cards right.
At one point during my travels, after having gained a fair number of levels, I found my class had changed. I was no longer a monk, but a bishop. I would have thought that class more apt to follow priest, but who am I to argue.

Rumors of the tower Habel drove me north. There I found what looked more like a cave than a tower. Inside offered more difficult monsters the deeper in I ventured. Further rumors suggested there was an elevator that needed power restored to operate. I found a magic talisman that does... something. According to the manual, it increases magic time.
I made my way around the level and found the inoperable elevator. The enemies continued to increase in difficulty and soon I encountered vampires, which nearly killed me in a single hit.
On the fourth floor I found the power source for the elevator. Seems simple enough. I headed to the elevator to see just how many floors this tower has. Since there weren't any more stairs up, the elevator was really the only option. Well, let's see, 2nd, 3rd, 4th... what this?
So, we basically skip to the end of the tower and have available floors 198 and 199. The top is said to have a giant beast. I don't think I'm quite ready to take it on, and I may purchase a bow and arrow to compliment my melee attacks.
There's also the mysterious castle that requires an ID card. The world on the whole seems small, and also wraps around, so I haven't gotten a good sense of exactly how small. I have the bankbook to find if I ever want to invest my money.

I've bought spells to cure poison, heal, advance time (haven't had a use for this yet, although I've used it twice), and I just learned 'Learn', which oddly just disarms trapped chests. I've bought some armor since I need the added protection. I noticed when I equipped it that the character sprite reflected the change. If didn't know Faxanadu did it first, then I'd be mighty impressed, even if it is a simple sprite overlay.
Well, I wasn't expecting it, but I'm having a blast with this game. Maybe it's from coming into it after Wizardry, but so far the game has impressed me overall and done very little to irritate. I have high hopes for this one, although the world either needs to open up, or I'm going to be horribly lost for what to do next. There's always the chance it's just a really short game.