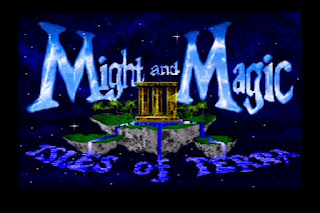 I might be playing this game, at the very least this version, a bit early, but I have a good reason. I have a policy of playing any version at the time of the first release, and that's what I'm doing here. The TurboGrafx-CD version is incredibly expensive and difficult to find, and I couldn't confirm it had mouse support (or if the TG even had a mouse released in the US). As one of the few SNES games to support the mouse, I felt this would be the better experience. I'm not sure why then I decided to use a controller instead, but I'll attribute it to trying out a different experience.
Like most Might and Magic titles, the majority of the story is in the manual. It follows a band of adventurers as they seek ancient ruins where a scroll was said to reside. Sheltem was once again behind some brewing evil about to unleash on the world. As I began, it was unclear what this story had to do with the party I controlled. Starting year is 500, this game appears to be a prequel.
Every new game begins with the premade party standing in front of the inn in Fountain Head. It's not a bad group, but I always feel better creating my own characters. The roster is restricted to 10, so I deleted the original (getting their items beforehand) in order to create a new full party. To create a character I selected character portraits (race and sex that are locked to these), stats rolled randomly with the option to swap them, and alignment (good, neutral, evil) that only comes into play with equipment in this series.
Available class is determined by the character's current stats. Classes come in a normal variety of fighter (barbarian), cleric, thief (robber), mage (sorcerer), and druid in this game with the addition of hybrid classes of each one with a fighter for knight, paladin, ninja, archer, and ranger. I don't know if it'll become necessary to have one of each. There are also mercenaries in each town. They take up one of the six positions in the party though, so I'm not quite sure what use they are at this time.
With the party fully formed (knight, paladin, cleric, robber, druid, sorcerer), I set out exploring the first town. I quickly found Fen's Fineries, which sells additional equipment. I bought a second bow, and outfitted everyone with additional armor (so far I know of helms, gloves, boots, chests, cloaks, and shields--there may be more). The manual is light on information about equipment; about the only thing it covers in any detail are spells.
Fountain Head also has a tavern, training ground, bank, and magic guild operating on a day/night cycle. Time progresses only when taking actions, which remains true even when distant monsters appear on the display. There are also fountains throughout that ooze green slime. At a prompt I threw a coin into one, and a group of three bubble men appeared assaulting the party. I fear some sinister force is behind this. Not too difficult, I repeated the process until I had enough experience for level 2.
While exploring, the party has options in the side panel to shoot arrows, cast a spell, rest for 8 hours to replenish HP and MP, bash forward, dismiss a character, consult quest log, view the auto-map (if a character has cartography--which is easy since there's a skill teacher near the bank), check the time, and get a status overview of the party. Selecting a character portrait brings up additional details on that character and their inventory. The gem on the bottom of the main display opens the system menu to save and load the game. The gems in the corners indicate elemental resistances for the party, and the gargoyle faces in clockwise order from the left indicate an active levitate spell, nearby enemies if a character has danger-sense, and likewise secret doors if a character can sense them.
Characters that drop to 0 HP or lower are potentially only unconscious. They're only dead once their portrait is replaced by a headstone. There are gates throughout the city that only open with a good bashing. Bashing down a door takes a skill check of the first two conscious characters to succeed, and whether successful or not damages them in the process.
The menu changes to combat options when enemies are within melee range: attack, cast, use item, run (per character), and block. There is also an option to set a default choice for each character to streamline combat a bit. During these early battles I haven't found a need for anything other than attack. Unlike previous Might and Magic titles, gold and item rewards from combat are given automatically once all enemies in the area are vanquished. Some enemies, like the bubble men, don't give any reward. So far, these early enemies drain resources far faster than I'm rewarded. Hopefully things balance out eventually. Unfortunately, I haven't made much progress in the game due to a strange bug. I had trouble determining the cause as I couldn't find anyone else that wrote about it online.
At first I thought it was the cart, but I tried the same cart again.
I ordered a second cart. It happened again, which had me thinking it was my SNES.
I then tried on emulator, and reproduced it there.

It was then I went back to the videos and confirmed it always happened when I used the shoot command after moving, but not every time. I think using a mouse prevents it completely due to timing differences with the input, which would explain why there's no info about it online. So, because I decided to try something different by using controller, I lost weeks of progress, but uncovered a bug no one seems to have discovered or at least bothered to log online. Word of advice for anyone playing this version: use mouse, it's faster and doesn't have this issue (so far).
Having some more experience with the game I adjusted my party to knight, ranger, archer, ninja, cleric, sorcerer. I feel like this combination will serve me a bit better. I've already been taking down enemies quicker with arrows fired by the archer. Burning the goblin infested wagon rewarded me with experience and some magical equipment (including a belt of luck).
One of the biggest changes to the series is the addition of quests tracked in a log. The game begins with one regarding Fountain Head and the cleaning up the green ooze, and I've been focusing on clearing out the caverns below town to rid it of the ooze. As I explored I found two other quests: ultimate orbs of power are requested by King Righteous of Castle Whiteshield, and 5 silver skulls are necessary for some ritual by an aged man named Skull Miser. As I've been clearing out the caverns below the town I've found those skulls slowly, and expect to have all five by the time I finish.
Inside the caverns below Fountain Head were bats that poisoned, barrels to search, and completely visible unavoidable traps that taunted me as I had to walk through them . The bats were fairly weak yet quick, and often acted before I could. Their poison, and possibly all poison, drains stats rather than hit points. Cure poison is an 8th level spell, far out of reach. Barrels usually have gold, although some have permanently increased stats, and still some are damaging or instant death. Wanting to ensure the increased stats went to the relevant class, I started saving before the barrels and loading if, say, my knight gained wisdom. A potential problem presented itself, doors I had bashed were shut again when I loaded. This, coupled with poison that drained my might, meant I could "soft lock" myself behind one of these doors leaving the only way out my last resort of contacting Mr. Wizard. Calling on this power returns the party to Fountain Head at the cost of 1 level per character, not too bad at this low level yet still a pain. I think now I'll avoid the possibility by only saving in towns.
By the end of this last session I've finally caught up to all I did through all the other false starts, and then some. A game can go so quickly when you have a little knowledge. Like knowing my sorcerer can't forgo a weapon and hold both a mind whistle and fast horn.
Now with all that trouble out of the way I can start enjoying the game. This is the first where auto-mapping is so prevalent that I'm risking not making my own maps. I am taking notes of interesting locations, but the auto-maps seem to stick around indefinitely. Making my own maps, while enjoyable, would take up even more time.

Email ThisBlogThis!Share to TwitterShare to FacebookShare to Pinterest
Labels: FCI, Iguana Entertainment, Might and Magic, Might and Magic III: Isles of Terra, New World Computing, SNES