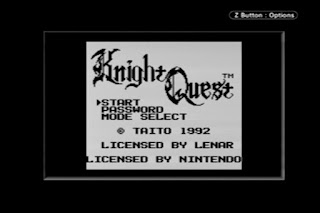 Knight Quest is about as generic a fantasy RPG as it comes, complete with a kidnapped princess, dragons, and evil lords. The developer, Lenar, seems to have dabbled in a number of genres, but only a few ever made it to the west, this being the only RPG.
Will, 14 years old, dreamed of becoming a knight. He was granted an audience to see the king. The king instructed him to slaughter goblins to the north. Should he survive this suicidal task, then he would be allowed to train as a knight. At least he was given a sword, armor, and a small amount of gold.
About the only interesting thing about the game is the combat system. Will's attack comes in four different styles: Swallow, Sea Gull, Falcon, and Eagle. Each attack has a different effectiveness on each enemy. For most, one particular attack is their Achilles' heel, and they take massive damage from it compared to the others. Figuring out which attack is best is (I suppose) where the fun comes from.
The town offers an inn that fully heals Will for 10 gold. Shops sell a variety of magic, three tiers of potency for healing items, as well as equipment upgrades. Visiting the king provides a password, helpful for restoring the game after a break. Enemies offer fair gold and experience rewards, but grinding early levels is necessary. Losing all HP in combat sends Will back to the castle with half his gold, not a huge setback.
After defeating the Goblin King, Will was whisked back to the castle where the king rewarded his bravery with another quest: investigate a giant tower that suddenly appeared on the cape. Getting into the tower required finding a key hidden in some woods to the west of the tower. Defeating the wizard led to another quest to seek out help from Tabasa the witch in defeating the Dark Lord. Tabasa lived across the river to the west of town. The Dark Lord ruled over the Gido Empire, and the king was worried an invasion would soon follow.
I became a bit lost at this point. There was a lost woods I explored for a bit before I found a logger's hut who offered to repair the broken bridge. Collecting lumber with the axe he provided allowed him to repair the bridge. I then skipped Tabasa's house to the south of a small village because they had already told me he frequented the north shore town. He wasn't there, and a haunted mansion was inaccessible until I actually made the trek out to the empty house of Tabasa. This necessitated a trip back to the shore town to learn Tabasa had just left for the mansion. Then, and only then, was the way into the mansion accessible.
When I found Tabasa, he was battling an arch wizard. The strain of sealing his power was too much though, and he expired at the end of battle. The Arch wizard was pretty powerful; I fell the first time I faced him with no healing items. I returned with three hearts (top tier healing), and killed him on the second attempt. The king didn't have time to mourn the loss of his friend as his daughter had been kidnapped. A dragon had been spotted to the north, but the mountain pass had been blocked by rocks only breakable by a magic hammer. I picked it up from the grave-keeper after learning Tabasa had left it with him. I also found the third level sword in a shop hiding off nearby.
The next area required further grinding to get the level 4 armor, and save up enough gold to purchase hearts to help me survive against the next boss. I found a magic fountain that produced an endless supply of potion 2s to help with the grind. I rescued the princess after purchasing the new armor. She told me that the Dark Lord was behind the kidnapping. Will then commandeered the dragon and rode it all the way to his castle.
There was no turning back as the dragon had suddenly disappeared. I saved up for a level 4 sword, and then delved into the castle. There was a healing heart inside that continuously respawned after transitioning floors. I collected it enough to fill my inventory. Then I skirted nearly every enemy on the way up, and ran from those I stumbled into. The dark lord fell quite easily.
Elapsed Time: 4h29m (Final Time: 4h29m)

Combatant - I liked that they tried to do something different with combat. Giving the player attack styles to choose from was meant to add strategy; however, I don't think it quite worked. Aside from magic items that were under-powered compared to just attacking, the only strategy is to figure out the best attack and stick with it. The enemies were a combination of fantasy creatures and overgrown animals, some nonsensical like jellyfish. Gold and experience rewards were fairly well managed that I only really needed to grind in the beginning and near the end.
Rating: 4
Admirer - I suppose Game Boy games aren't robust enough to score highly here. There's no customization, and sprites are static. Controls are well done, and avoiding combat is possible with careful planning as all enemies are visible and move on the over-world.
Rating: 2
Puzzler - One point for a main quest, and that's it. No puzzles, nothing to solve. It did offer some non-combat portions to the main quest that I thought were nice touches, but they honestly weren't very deep (e.g. cutting the tree to make a bridge). There's only a single solution to every problem. The Tabasa portion felt a bit arbitrary by forcing me to stop by her empty house and the town she frequents.
Rating: 1
Instigator - It's a basic story for a basic sort of game. The dialog isn't terrible, and NPCs do talk about the current quest. The game lacks descriptions in-game, and the chapter-esque division between the plot points removed any chance to immerse myself in the story. There are no decisions to make, and no way to impact the story.
Rating: 2
Collector - Most of the points awarded here have to do with the ease of equipment upgrades, and an economy that stayed relevant throughout the game. Buying the heart healing items became necessary at the third boss, and I went through many on the fourth, and final. There are a good number of magic items, but I didn't talk much about them because they're all useless money sinks. Inventory is limited, and there's no indication of getting all items.
Rating: 3
Explorer - The sprite work was well done, although plugging colors into the game looked a bit strange. The music wasn't memorable, but I had no inclination of turning it off or down. There are a few places where exploring rewards the player with some early healing items for free, and the world is mostly open from the beginning (aside from the broken bridge, rock slide covered pass, and mysteriously locked mansion). I don't think a Game Boy game has the space to put in random discoveries that have nothing to do with the game.
Rating: 4
Final Rating: 16 [27%]

Overall, it's a simple game that offers everything in the first 30 minutes, repeated 4 more times. As a portable title, I think it's a good game for a short distraction. The use of passwords instead of battery saves makes restoring a bit of a pain; however, the continue system allows anyone to finish it fairly quickly.
There's part of me that wishes more games were this short; however, that won't be the case for the next one. Might and Magic is probably going to be the longest NES RPG. From what I hear, it's a faithful port of the original, and well-made with great sprite work and music. I remember trying to play it at some point, but getting absolutely nowhere. I definitely didn't get out of the first city. So, while this is mostly new to me, after playing for some time I can tell that my experience with the second game (released on the Genesis a year earlier) will help tremendously.
Posted by Zenic Reverie at 2:28 PM