With my abysmal start to Wizardry, I decided to enlist the help of the few readers that posted in the previous entry. Adding in their luck, I got past the first floor and am well on my way through mapping the second. I hope the characters are fitting to each, Archivis was the only one who requested a specific class.

I spent some time ensuring to get 17+ bonus points and focused on vitality. Even so, I still got a few levels where a character only gained a single hit point. I also went with an evil party because, well, ninjas. One thing different this time around was to only equip my first three characters. Since they're the only ones that can attack or be attacked, there's no reason to equip everyone from the start.

Before getting back into the thick of things though, I thought it best to peruse the manual a second time. Here are some interesting things I learned:
I missed this last point until after I started pulling my old characters out and stripping them, evil party needs gold. Once I retrieved everyone I noticed I was only up 500 gold, minus 250 for raising a character that died during one of those trips. This includes the gold gained from fighting monsters.
On the suggestion of the manual I took the first floor one fight at a time. This slow build-up felt overly cautious, but considering my first experience and the luck involved, I wanted to maximize my chances. After a few levels I felt confident and explored.

I noticed a decided lack of treasure sitting around. Chests are only gained after combat it seems, but not every combat will produce one. Pacpix has yet to fail disarming a trap, but he's only produced a single anointed mace, which sold for 15 gold, despite max luck. I've found several statues I'm not sure what to do with, but maybe there's a clue in the description. 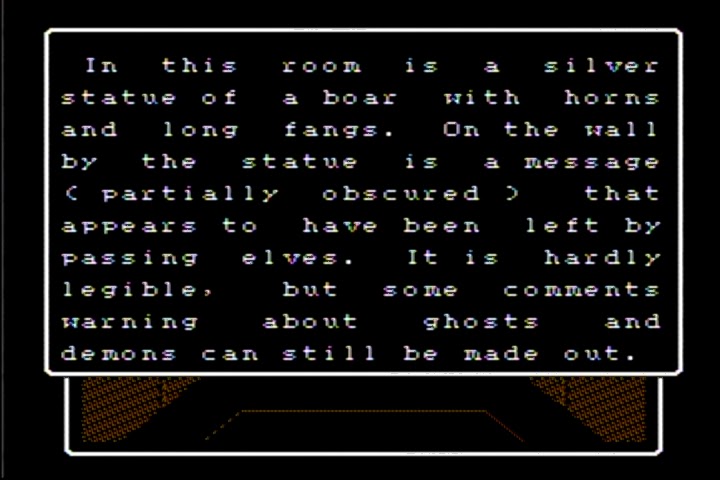 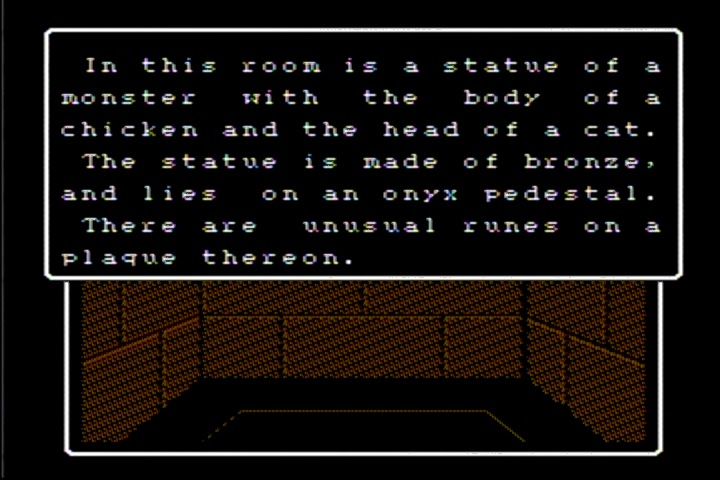 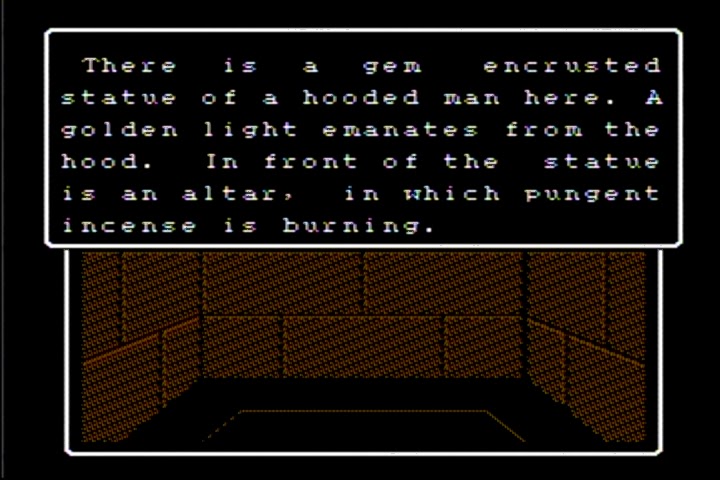 I searched each one and came away with two keys and a massive influx of experience. This last statue summons the ghost of Murphy. He seems tied to this plane through the statue, and no matter how many times I defeat him, he keeps coming back. He's a friendly ghost though, so a good party would struggle with leveling a bit more than I did.
I started to think maybe I was over-leveling, so I moved on to the next floor. Here I was poisoned, paralyzed, and faced imminent death at the hands of 6 ninjas. The difficulty curve sure is on a steep slope in this game.
I made it as far as one more statue, an animated frog that started doing some strange dance as I approached. What is the purpose of all these, what I assume are, quest items? There's very little of a cohesive story between them. Trying to find some clue in the description leaves me dumbfounded. A silver Key came from the silver boar, a bronze key came from the bronze statue (what do you call a half chicken / half cat creature), and a frog statue came from the frog statue.
I guess the only thing to do is continue exploring. I stepped into floor 3 and 4 to check them out, but didn't get very far. I still have some of the second floor to map. Things are going well so far, which means I'm sure the party will meet an untimely end during my next session.

Email ThisBlogThis!Share to TwitterShare to FacebookShare to Pinterest
Labels: Wizardry