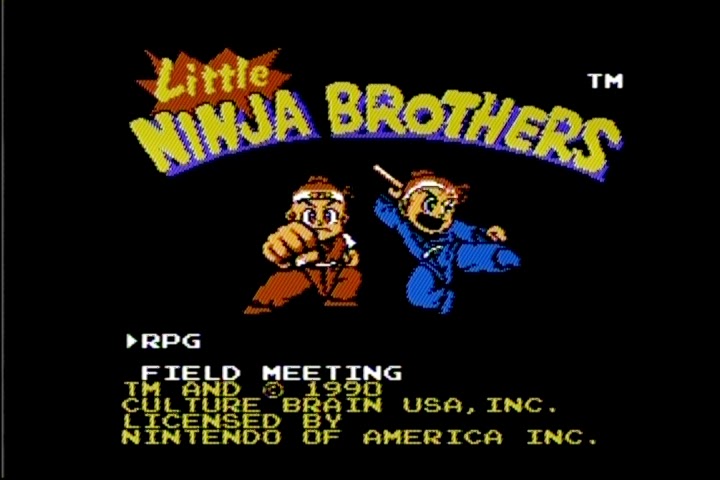 Time to welcome back Culture Brain, the creators of innovative titles such as Flying Warriors and The Magic of Scheherazade. Sadly, this is the last series we'll see come out of the group that did their best to seamlessly blend action titles and RPGs.
Little Ninja Brothers is the sequel to Kung Fu Heroes. It expands on the original by adding an explorable world (including towns, NPCs, and mini-games), character levels and equipment, and a progressing story. It retained the action sequences as random, and fixed battles. The manual also mentions turn based battles, but I have yet to encounter one. The series (originally called Super Chinese ...) continued on in this fashion for six more games in Japan. Of those six, two were localized, but we'll get to those in the future.

The game starts with a choice: do I want to play the RPG, or field meeting? The RPG is the main story, and field meeting is a collection of mini-games. Either selection leads to the possibility of playing with 1 or 2 players. From the description in the manual (and my experience to come shortly), the mini-games are also accessible in the main game. Following this, I had to decide the difficulty level. I chose the hardest based on the description in the manual where even normal was described as "for beginners and kids."

The titular ninja brothers are Jack and Ryu. Right away they're tasked with saving their land from the Yoma clan. According to the television they had on while practicing in their monastery the emperor was kidnapped, and Blu Boltar declared himself the ruler of the land. Well our heroes won't stand for that.
Before departing, their mentor described seven prism bells that are required to save Chinaland. He then payed them off with one, some starting cash, and kicked them out into the wide world.
The first town offered up some equipment to spend the meager allowance. I purchased and equipped the best weapon and armors, fully draining my funds. Each town hosts an equipment shop, a tool shop that has miscellaneous item, a hotel, and a convenience shop that will restore a fallen hero and give the password to resume a game. There are other random buildings as well. I gathered a fair amount of warnings, and then stumbled into a training house that forced me into a mini-game.
Upon entering a particular house I received a tutorial on how to execute a dragon kick. The mini-game that followed was actually harder when using it; I'm baffled. The goal is to pop 20 balloons, and reach the end of a track. Merely jumping into them is enough, and allows for more accuracy.
With that out of the way, I made my way north. Random battles let you know the approximate difficulty level (or suggested character level) for the fight, and then a choice to fight or run. So far, the level doesn't seem very accurate (I easily beat a level 6 battle at level 3), and running has yet to fail (but why run when the battles are so easy).
I ran across a divine house described by a villager. Inside was the Wise Stallion, and another mini-game. This one I obviously failed in all logical terms, but still passed somehow. I can only guess there wasn't really a goal, but then what was the purpose of showing an AI competitor?
Next stop was the city of Deli-Chous, where the mayor is rumored to have one of the prism bells. Deli-Chous is a town that creates the most delicious delicacies; however, the mayor is hording them in his mansion. I was all set to charge in and right this wrong. Instead, I get invited to a nice dinner.
Obviously something was a little fishy about this (no sushi?); after Jack had his fill he took a nap, and woke up in prison. There were others there, including the real mayor. The imposter was actually one of the Yoma clan, and he was fattening people up in order to eat them. One of the prisoners found a hole, but was much too fat to fit. Perfect size for Jack though.
On the other side of the hole was a passage that led outside about a screen's length away from town. There was a small hut that housed a strange character: the Savior Mouchee Mouse. She gave me a test, which I passed, and sent me on my way with a talisman that protected me from Tub-A-Tummy's magic.
With my new protective amulet I returned to town and faced off against Tub-A-Tummy. The fights leading up to him were quite difficult. I'm certain it's because I was under-leveled while on the highest difficulty. There are three fights before the boss battle.
I grinded on these three fights for at least 20 minutes, gained three levels, and then finally vanquished the boss. The boss had a power that was a cheaper shot than even the lightning: a multi-directional shot that turns Jack into a slime. As a slime I'm powerless, and get eaten by his minions. I relied on throwing ninja stars at him until he died as getting too close.
For my efforts I obtained a bell prism, the second of seven, and enjoyed a feast of celebration at the mayor's house.
I get the feeling that this is all the game has to offer, and we'll repeat this for the next few hours (six if I continue to average one hour for each bell, and one for the final boss). I'm really eager to start Quest of the Avatar, so I hope this doesn't drag on for too long.
Elapsed Time: 1h05m (Total Time: 1h05m)
Posted by Zenic Reverie at 9:31 AM