First, I'd like to thank everyone that visits, reads, and comments on the blog. I wish I could devote more time to this endeavor. I'm fairly sure if I went for double time, I'd actually be able to finish this list, and possibly catch up to current titles within 15 years. That's just wishful thinking though. In any case, I have some things to bring up that really don't fit in any other posting.

Let's start with some horn tooting and get that out of the way. I, and this blog, were recently referenced in a podcast. The Retro League podcast covers various topics on video game news; anyone interested in games should give it a listen. How this came about is one of the co-hosts ran across this blog because of the ad used for the Hydlide post, which was borrowed from his (Hugues Johnson's) personal site; the link back showed up in his access log, which caused him to come check out the blog.

Next up, it recently came to my attention that one of the followers of this blog happens to have a blog covering console RPGs as well. Started many months prior to my own, it is another blog that was inspired by the CRPG Addict. The focus there is on turn-based games, but also covers games that have translation patches available. While I expect a lot of crossover, and welcome it, there's a lot more that it offers beyond what I'll cover. He's also completing games a lot faster, so check out Shen Nung's Inconsolable if you're interested in more console RPG blogging. 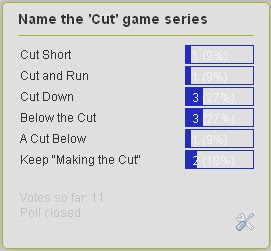 The recent poll ended in a tie. Once again, I didn't vote, so to break the tie I'm going to go with Below the Cut for that series of posts. Although, Cut and Run has grown on me a bit, so I think I'll be using that in cases where I find myself playing a game that isn't an RPG, or any last minute cuts like Hydlide. Thank you for the suggestions, and voting. The emulation poll is up for another week, and currently I'm surprised that so few people care about playing games on the original system. I guess without the incentive to support the developers of those games, much of the buying experience is lost.

Let's take some time to cover the list of games. It's quite massive, but mostly incomplete for the recent years. I've added three games that are definitely in my mind (Skyrim, Xenoblade Chronicles, and The Last Story); I'm sure there are many others missing. I've finished rating the current games, and am now turning my attention to other RPG lists. First up is the Seedy Gamer list, which adds things I definitely wouldn't consider CRPGs (the rest of the Zelda games, and the Harvest Moon series); however, it seems to include many games I hadn't considered, and I think it's good to cover these games in any case. If there are any other lists out there, please let me know of them.
Posted by Zenic Reverie at 1:18 AM