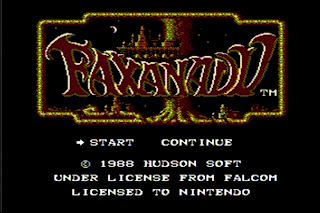 
Faxanadu is another game I enjoyed immensely as a child. It reminded me of Legacy of the Wizard, but the exploration was a bit more manageable for that time. Even so, I don't think I managed to beat this one on my own. I recall a sword with three points and one of the early bosses, but hardly anything in between.

The name Faxanadu comes from a game named Xanadu, the second game in the Dragon Slayer series. Combining Fa (from Famicom) and Xanadu, they released their creation as Faxanadu. I don't see any similarities beyond the name; I can only imagine the Dragon Slayer series was popular for the time, so using the name might have increased sales.
The main character is an unnamed hero who returns home after adventuring; however, not all is well with his home town. He takes it upon himself to discover why his town is now on the verge of destruction. To do this, the hero must venture into the "World Tree and overthrow the Evil One that lives in the Evil Place." I don't think someone tried very hard with the story.

Taking a look through the manual has refreshed a bit of my memory, and hopefully this is a quick jaunt through an old classic. I actually started playing through these games hoping for more turn-based games. Miracle Warriors is coming up shortly though, so I have that to look forward to. Enough chit-chat for now, on to the game.