Following up on my hunch, I headed to the last door I hadn't checked. Unfortunately, the uniqueness of the door proved there was a different key to open it. With no other leads I headed back to the boss. Once again I found my sword was no use, and fireballs bounced ineffectively off his sides. I tried everything: the time wand, transformation, light, peace of mind ring, and all combinations I could think of. One thing I didn't try were the idols. Of course, I found his weak point finally; it's directly in front of him where he continuously shoots.
Had I tried one of the idols, I probably would have noticed that they turn my fireballs into enemy seeking missiles. I had no idea the game was so easy. In fact, there's an item I completely missed--probably in a secret passage during the first part of the game. The Cape of Holy Spirit continuously heals HP much like the Heal Ring in the previous game. It would have saved me from a good number of deaths, and returning to the villages just to heal. I'm actually glad I didn't know about these effects, as I enjoyed the challenge, and diminishing that would have taken some of the fun away from overcoming the game.

With this boss out of the way I found the demon Keith. He provided Adol the Canal Key. This unlocks the door I spoke of earlier, and allows Adol to drain the water from the sewers. While exploring, I found the way to the next area, but decided to fully explore before moving on. I haven't been mapping at all. Most top down games are pretty easy to get through without doing so, but in all the twisting passages in the sewers I got lost. I can't say for sure how much time I spent it was probably a good 20 - 30 minutes.
I don't mind getting a little lost in most CRPGs. Usually it can lead to some unexpected discoveries, or ease grinding. I did find one treasure in my additional exploring, but did very little grinding. Most of the sewer was sparsely populated. Getting lost here was just frustrating.

Eventually, I did find the exit and moved on with the quest. I found the Goddesses Castle, and am told of the fate of Maria, one of the villagers taken as a sacrifice. Maria is on the bottom floor behind some kind of barrier, and she's to be killed at the fifth bell sounding at the top of the tower. So, Adol races to the top just in time to see Dalles (the wizard who turned Adol into monster previously) ring the bell a fourth time. Dalles laughs at the pathetic attempt Adol has made, and as Adol stands by, Dalles rings the bell a fifth time.
This was one of the most boring sequences for me. There are no enemies (except for one boss upon entering the tower), and the approach is completely scripted (bells toll at set locations). More so, Adol needs to walk all the way down a still completely empty tower because there's a treasure chest he must retrieve.

Then begins the back tracking to previous events. The meeting taking place that I listened in on is now over, and the room contains a chest necessary to fix the statue that turns people back to flesh from stone. How do I use it? Climb that mundane tower again, and use it there. At each step, I needed to go through a long speech from the goddesses who tell me exactly what to do. After reviving everyone, I'm given a golden necklace that transports me to where Dalles is hiding out. Before going there though, I am given the Cleria Sword and Armor by someone else that was turned to stone. The fight with Dalles goes quickly with the help of the Life Drop that revives Adol should he die.
Continuing on, I run into past NPCs that are now helping me to confront the real threat behind all the dark acts. In one of the final rooms before the fight with Darm a lot of narrative is given, and two NPCs from Ys 1 show up to give Adol items he needs to defeat Darm. We also learn Feena was one of the goddesses of Ys. The game then wishes us good luck. It felt a little rushed though being given all these items at the end without needing to seek them out. No time to think of that though; on to the final battle.
What a final battle. This fight is rightly the most difficult one in the game. Much more of a challenge than the one with Dark Fact. There aren't any tricks to getting through it, no special weak points to exploit. All equipment is predetermined except for the magic you bring in. Full Cleria gear is required, as is wearing the Goddess Ring. Of course, I say you can select any magic you want, but only the shield wand (recently acquired) is the correct pick; everything else is useless. It took nearly an hour of attempts, with fights lasting at most 2 minutes. In the end, I'm fairly sure I was getting better, or at least luckier.
In the middle of this I decided to gain a level to see if it would help. It was then that I noticed I still had the game set to fast speed. There are two settings--slow and fast--and I've switched between the two often in the game, usually keeping it on fast speed though. It doubles Adol's walk speed, but also makes fighting enemies rather difficult. Still, turning this off didn't help much in the Darm fight. Maybe if I were max level it'd be a bit easier. I was 60, max is 62 by most reports. Here's a video of the final battle, sorry for the poor quality (I need a better computer):
And so it ends. A long sequence of each NPC telling their side of the story unfolds, and we learn tidbits of information about each of them. Most of them are descendants of the six priests, and others are just there for the ride. The goddesses thank Adol for his efforts, and announce that the problem was magic, so they'll take it with them and leave Ys forever. Obviously something happened later on as there are many more Ys games, and if I remember rightly there's magic in them. 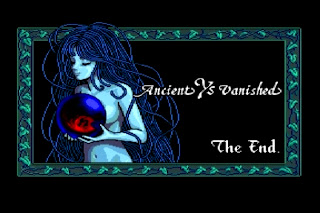 I'm not sure if I'll play tonight or not, but we'll be moving on to The Magic of Scheherazade as soon as I get some other posts up. I didn't really get any negative feedback from combining play sessions (in fact the only comment was positive), so I'm considering not being so strict in writing one post for every night I play. I'll put up a poll just to make sure the silent majority agrees.
Posted by Zenic Reverie at 10:07 PM

Email ThisBlogThis!Share to TwitterShare to FacebookShare to Pinterest
Labels: Ys: Book I & II