Just a quick update tonight. I'm trying something a little new in case you were wondering where all the posts went. I'm slowing the pace a little bit to prevent possible burnout. I have a lot of posts to get to, and I'm aiming at catching up in the next week or two. I'm still playing on Tuesdays, Thursdays, and Saturdays as much as I can, and I'm glad to see a few familiar names in the chat. So, even if I'm not posting, I'm still playing. 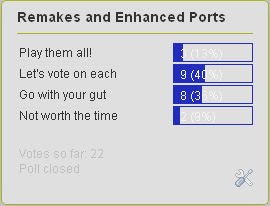 In the last poll I asked about playing remakes, and the majority thought we should vote on each. Well, I'm going to need everyone's help with that. I'm not always aware of remakes, so please point them out to me in time.The current list reflects what I plan to play; I need help from others to point out if I'm missing out on an original or a remake that deserves some attention. On the list, I not only have shunned remakes, but also original games in favor of a port. The first example is the Ys game I just played. I passed over Ys I for the SMS because it's basically the same game as the first part of Ys: Book I & II. This'll be the first poll: Should I play Ys I for the Sega Master System?

To wrap this post up, I'd like to draw everyone's attention to Operation Manafall. It's a focused effort to get an officially translated international release of Secret of Mana 2 (Seiken Densetsu 3, originally released on SNES in Japan only). Hot off the heels of Operation Windfall--which helped to convince Nintendo to release three Wii RPGs--the hopes of those involved is that someone at Square-Enix (hopefully someone with enough authority) will notice the amount of fans begging for this game, and a re-release will come to a current console. Wish them luck, join their cause, like their page, and (most importantly) help them add another game to my list! [More info]
Posted by Zenic Reverie at 11:30 PM