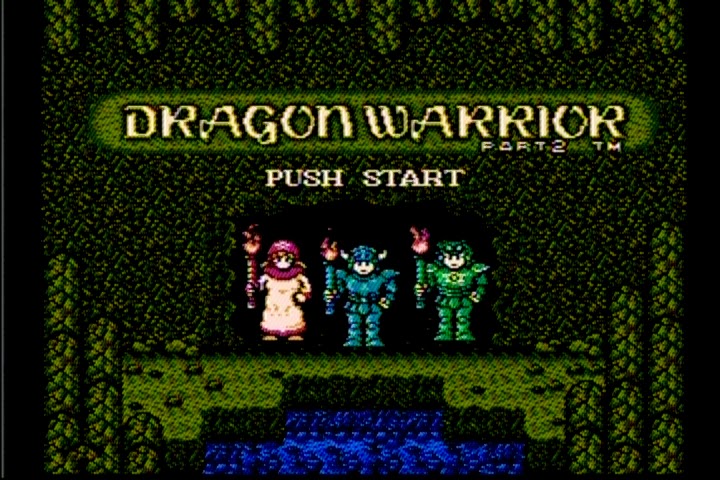 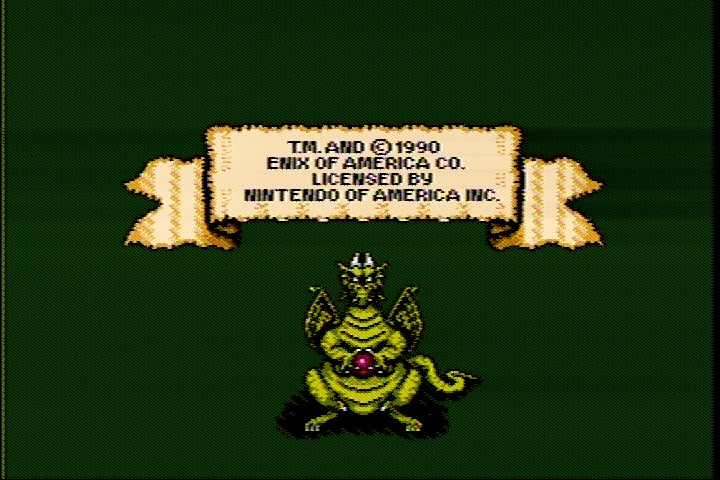 After the mediocre sampling of RPGs recently, it's nice to get back to a mainstream title. I think this is one of the first games that really hooked me into the story, even though by now I hardly remember anything beyond getting the companions. The cart I had required the NES was powered to keep the battery alive between play sessions. 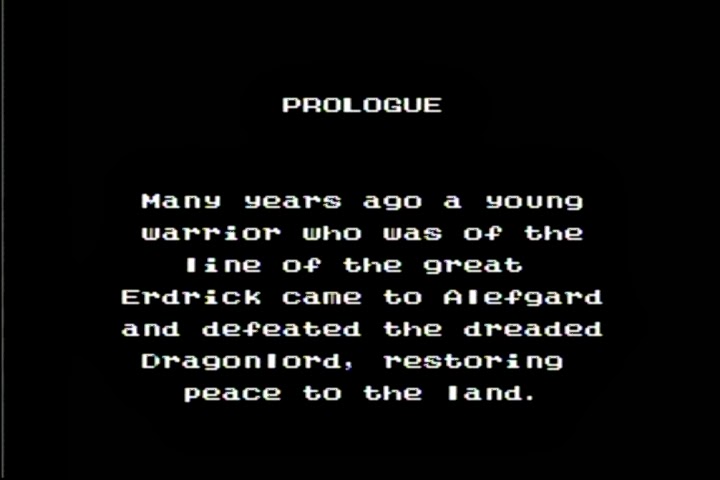 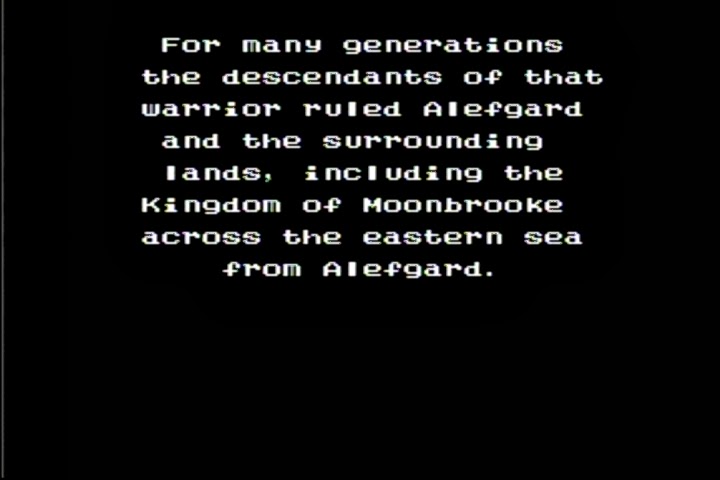 When Dragon Warrior II was released in the US, Japan was already enjoying Dragon Quest IV. It's interesting that such a long period of time elapsed between releases, but I do enjoy the touch-ups the developers added. One the of most enjoyable was a completely new opening sequence showing the fall of Moonbrooke Castle. 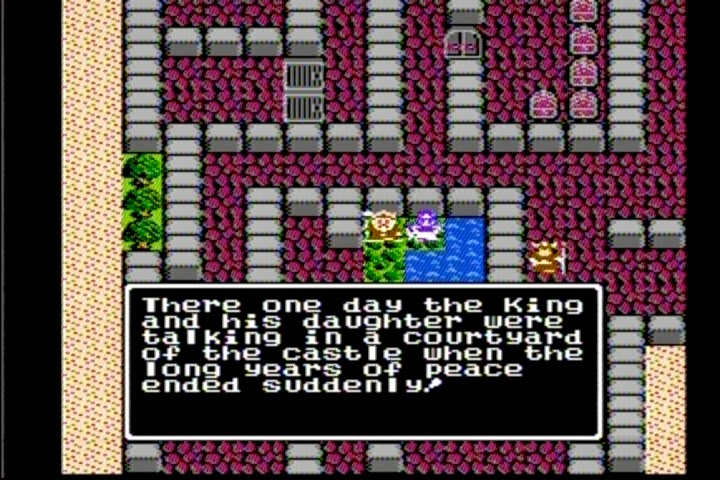 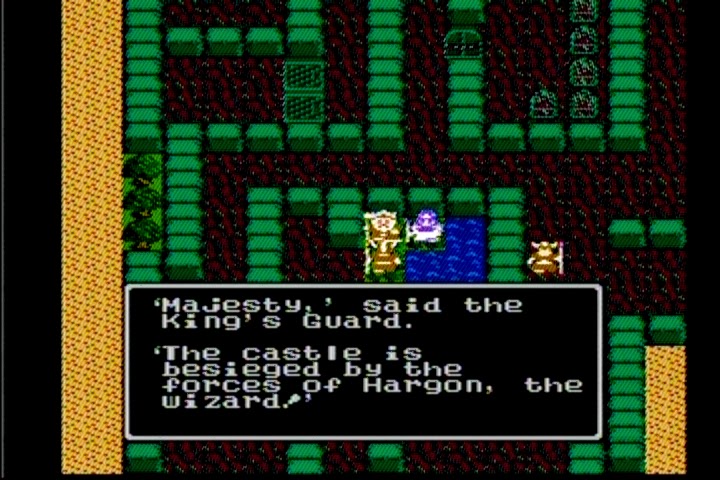 Correct me if I'm wrong, but I think this is the first example of a game introducing the back story through the in-game engine. Phantasy Star I and II had stills paired with text. It's now commonplace to give some back story before the game begins, but most games I've played for the blog so far have just plopped you into the game. 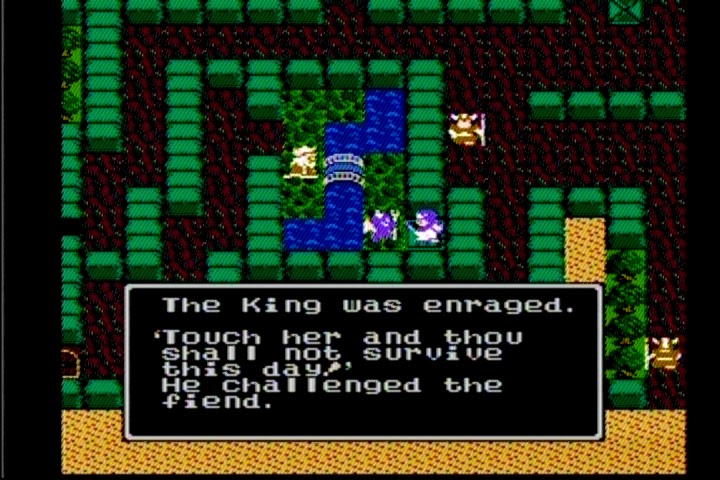 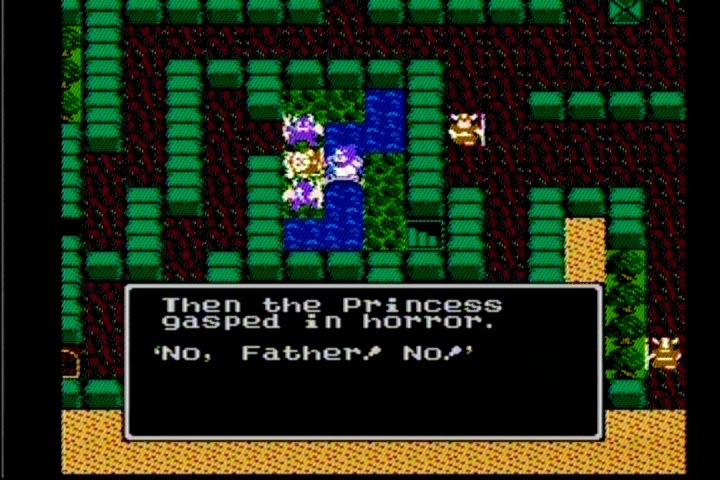 So far the music has really impressed me. The range they got out of the NES so early in its life is amazing. While the title music is probably one of the most recognizable, I feel the file selection/creation score is the best so far. 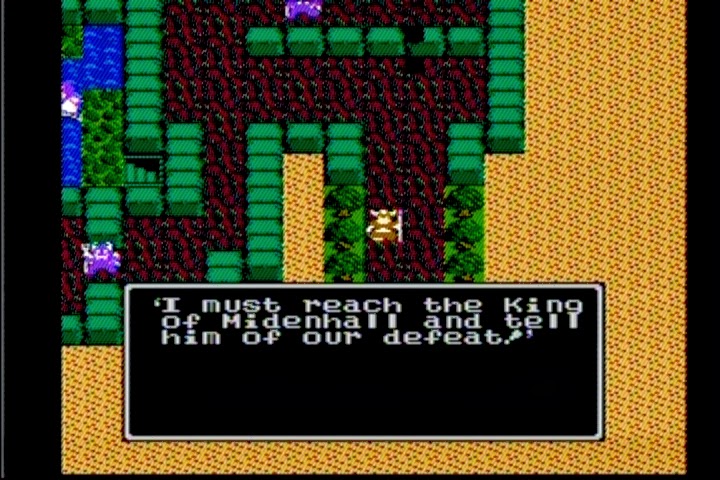 The ancient history given in the prologue, and more in depth in the manual, is that hero we played last time married the princess. From their love grew three children who moved from the land of Alefgard to found the kingdoms of Midenhall, Cannock, and Moonbrooke. Peace has reigned for the past 100 years. 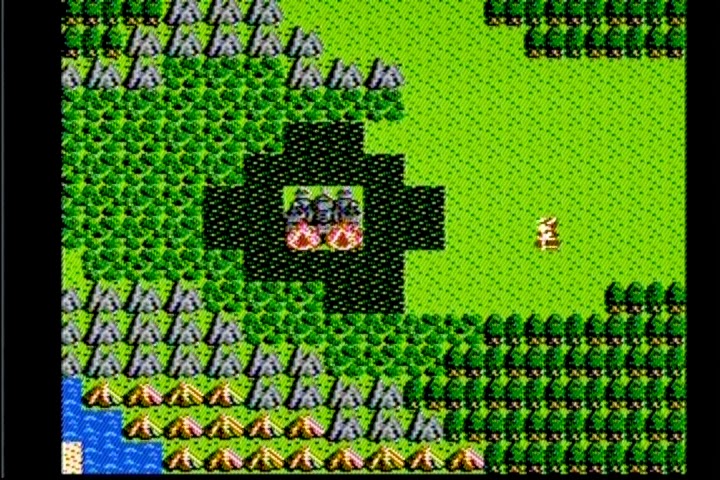 That peace was broken when an evil force attacked Moonbrooke, an evil believed to be brought on by Hargon. The King attempted to get the princess to safety, but they were overwhelmed by demons. Only a lone soldier, heavily wounded, managed to drag himself from the besieged castle all the way to Midenhall (I'm not sure how he managed as I could barely make that journey). 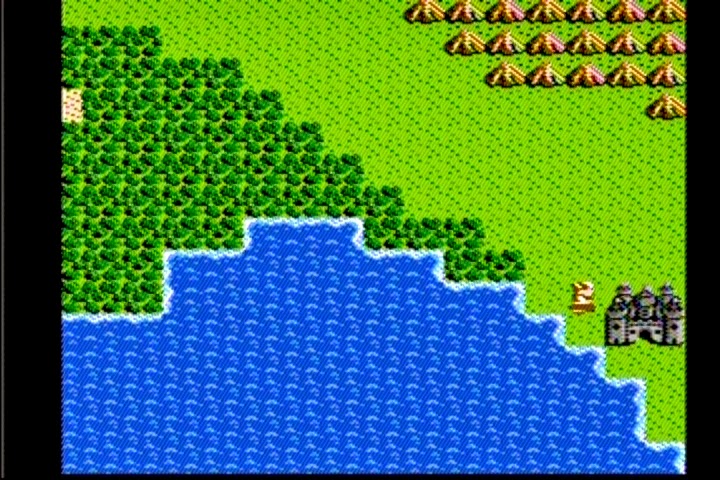 Upon his arrival, he relayed his story to the king of Midenhall. It spread quickly from there as normal townsfolk commented on the fall of Moonbrooke. The king, too old for such an adventure, appointed his heir to the task, and suggested he seek out his cousins from Cannock and Moonbrooke. I named the main character Gustavyo, which helps to determine the names of the prince of Cannock (Lars) and princess of Moonbrooke (Kailin). I can just imagine the schoolyard arguments about what their real names.

The interface is similar to the first game: menu based actions for talk, search, and other normal actions. One improvement is that stairs are accessed immediately by walking on them instead of through the menu.
I remember seeking out the companions immediately while keeping my level low was a good strategy since it keeps everyone's level at about equal pace. I forgot exactly how annoying this was to accomplish.
Lars, the prince of Cannock, is the easiest companion to get. He only appears after chasing him down from his castle, to the Spring of Bravery, to Midenhall, and finally to Leftwyne. I suppose this is to help the hero get his feet wet, gain a few levels, and some gold.
Kailin, the princess of Moonbrooke, was in the castle during the attack. Hamlin, a village nearby, acts as a base to explore the area. Here a dog follows the party around when spoken to, a hint that something isn't quite as it seems.
I ran into quite a bit of trouble trying to make it through this area underleveled. Dying is quite a setback. Only the main character is brought back to life, and half the party's gold is taken as payment for those services. There's still the cost to raise the other party members. I broke down after my first few attempts and gained about 3 levels before I tried again.
In Moonbrooke, which is overrun with monsters, the ghosts of the inhabitants haunt the ruins. The king's spirit tells the hero that his daughter was turned into a common mutt. Piecing together a couple of hints, one from another spirit that tells us where to find the Mirror of Ra, and a randomly informed NPC, I found the mirror and broke the transformation spell.
With the party fully assembled, I went back to the starting area to explore the land. I learned from the Spring of Bravery that the Token of Erdrick would play a role. I ended the session on a return trip to Midenhall, on my way to a monolith to the south. I learned about that from an old man who spoke of his brother staying there.
I was looking forward to playing the following night; unfortunately, my cart (more accurately my save) was struck down by a faulty battery. I thought I had a different cart. Apparently I either have the original, or this one has the same problem. At least it happened at the beginning of my adventure instead of half way through.

I have two options at this point: emulate or marathon the game in a single session. I'm leaning towards emulation as I, 1) already have the game, so don't feel so bad about doing it, and 2) it keeps play time in sync with posts, so I can get feedback from you guys. If I played the game straight it'd take up an entire weekend, I'd get dirty looks from my family, and either create one gigantic post or have to piecemeal my experience up to certain parts. I won't have time to play this weekend in any case, so I'll mull over it in the mean time.
I'll work on getting a save to the same point, and then continue on from there unless there's a great calling to burn through this game in a single weekend. I can now stream an emulator, so for those that watch the stream you'll still have that option.
Session Time: 1h33m (Total Time: 1h33m)


Edit: I've since run through the same actions (with less dying and meandering), and am at the same point in my now lost save file. Kailin, the princess, is 1 level higher since I didn't waste money on a fairy water that prevented some overland battles. I have a precedent apparently where I just add the time it took to get back, and I'm pretty surprised it only took 30 minutes.
Session Time: 0h30m (Total Time: 2h03m)
Posted by Zenic Reverie at 9:07 AM